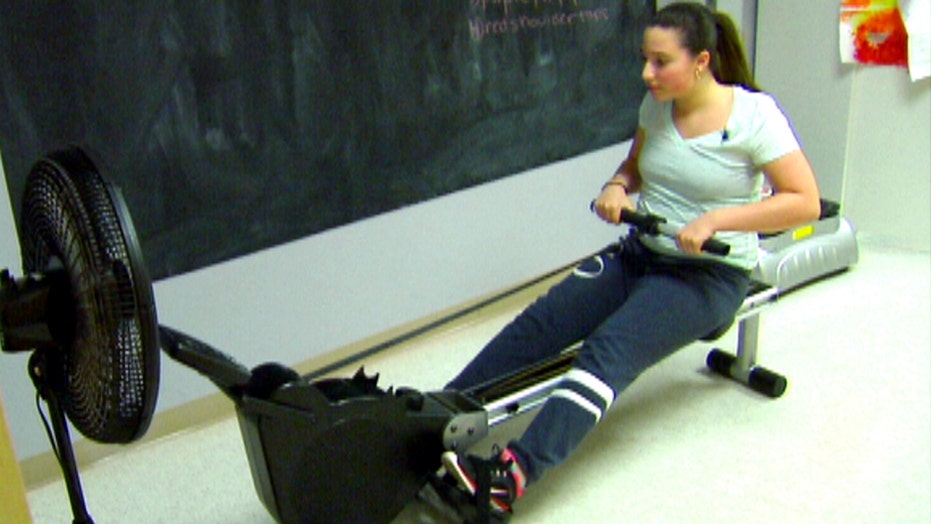 A rare condition called complex regional pain syndrome causes extreme pain in patients who have nothing physically wrong with them. Meet Francesca Dinicola, a 13-year-old who has CRPS and learn how she is overcoming it

Francesca “Franny” Dinicola, is a straight-A student with a passion for dancing, but the 13-year-old hasn’t been able to perform for months due to a rare syndrome. In September 2015, Dinicola was at a sleepover with friends when she bumped her leg on the corner of the bed while on her way to the bathroom.

Soon after her leg began to swell and a hematoma, or collection of blood outside of a blood vessel, formed. After several weeks Dinicola continued to experience pain, and was given a boot to wear to protect the hematoma and help it heal. In January, when there was no noted improvement, doctors recommended surgery.

“After the surgery is when the nightmare began,” Gena Dinicola, the teen’s mother, told FoxNews.com. “It was a disaster. She was in so much pain.”

The swelling and bruising got worse and the incision wasn’t healing properly. Dinicola was also left in a tremendous amount of pain.

“I couldn’t walk, I couldn’t shower, I couldn’t go to school,” she told FoxNews.com. The teen was also bedridden because her foot was so sensitive to touch and pressure.

“It burned a lot, it stung, it feels like shooting pain and stinging. It feels like pins and needles,” she said, describing the pain she was in. The sensitivity was so intense that Gena had to start bathing her daughter and said simply squeezing water from a loofah over her leg would leave her screaming in pain.

Doctors ran a battery of tests and scans but could find nothing physically wrong with her leg. They were baffled as to what was causing such excruciating pain until a physical therapist recommended that Gena take her daughter to Children’s Specialized Hospital in New Brunswick, New Jersey. At the hospital, Dr. Katherine Bentley, the director of the chronic pain program, diagnosed Dinicola with complex regional pain syndrome (CRPS).

“This really is a diagnosis of exclusion,” Bentley told FoxNews.com. “So though it feels frustrating to go to all these doctors and have all these tests we have to make sure that all these things we are testing for are not there.”

CRPS is a type of amplified pain syndrome that can affect anyone, but mostly presents in high-achieving adolescent females. It usually occurs after and illness or an injury.

“What we believe happens is when we have pain, the nervous system has a pain response and for people in chronic pain or amplified pain the response just doesn’t stop. The feedback look doesn’t turn off and in fact it gets worse,” Bentley said.

In reaction to the pain, patients usually favor the part of the body that is affected, Bentley said. They avoid touching it or putting weight on it which can actually exacerbate the problem.

Doctors aren’t sure why the syndrome strikes high-achieving individuals.

“[They] are usually doing great academically, in terms of sports, psychologically, in terms of friends, socially and then when something like [an injury] happens, it becomes very debilitating and…affects their whole lives,” Bentley said.

The psychological stress of worrying that an injury can take away the things they love, like dancing in the case of Franny, doesn’t help and may lead to a physical reaction like amplified pain.

The Children’s Specialized Hospital has a rigorous in-patient therapy program to help cure patients. In Dinicola’s case, she was hospitalized for more than six weeks before being released on June 11. Dinicola’s routine at the hospital began with pool therapy for an hour followed by meditation. She had two hours of physical therapy with two or three hours of occupational therapy plus individual and group psychological counseling.

Patients are taught several coping mechanisms from distraction to breathing techniques. They play games to help them concentrate on something else other than the pain they are in. For example, Dinicola played a card game with her therapist and had to walk on a balance beam away from the card table and back in order to play the next hand. The psychological aspect of the program involves teaching patients their body is okay.

“This program helped me learn that the mind and body are connected,” Bentley said. “With Franny, she had two MRI’s she had an ultrasound, she had a lot of testing done and everything was normal. So I can say, ‘Franny, I know your left can handle your weight, but we just need to stand on it.’ Some of it is just reassurance.”

During her time in the hospital, Dinicola went from being immobile to being able to run. She still has slight pain but her mother said there has been a remarkable improvement.

Gena hopes to raise awareness about this relatively unknown condition so that other parents don’t spend months with their children in pain and with a cloud of uncertainty following them around.