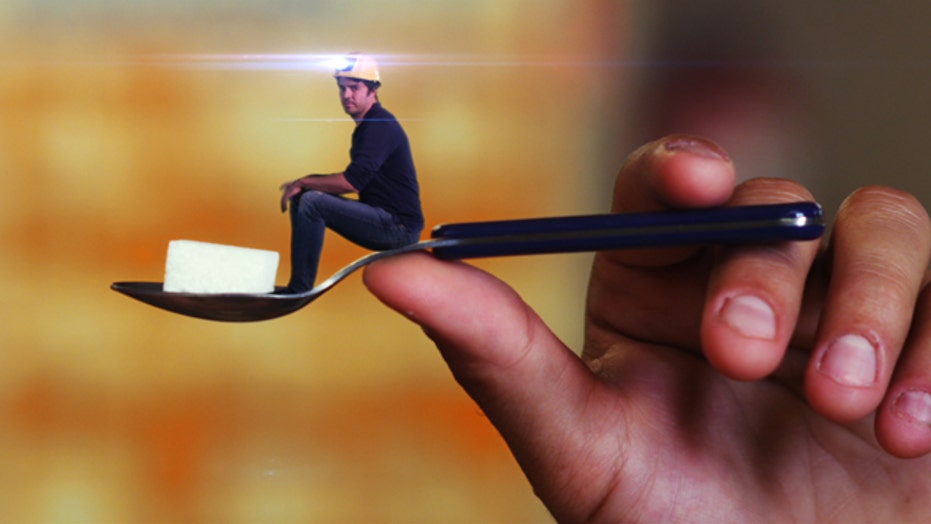 Where sugar is hiding in your diet

The average American consumes about 31 teaspoons of sugar a day-- more than twice what the World Health Organization recommends. Fox’s Julie Banderas sits down with Damon Gameau, the director and star of “That Sugar Film,” to learn the real effect sugar is having on our bodies

The average American consumes more than 126 grams of sugar per day, which is roughly 31 teaspoons, and more than twice what the World Health Organization (WHO) recommends for daily intake.

Fox’s Julie Banderas recently sat down with Damon Gameau, director and star of “That Sugar Film,” a new documentary that takes a look at the real effects sugar has on our bodies.

“Not many people realize just how pervasive sugar is in the food supply. It's now found in about 75 percent of the foods we eat,” Gameau told FoxNews.com.

In the film, Gameau conducts an experiment with his body and consumes 40 teaspoons of hidden sugars a day for 60 days.

But the Australian filmmaker doesn’t reach the 40 teaspoons from obvious sugar culprits like sodas, ice cream or candy. Gameau’s high-sugar diet only consists of so-called 'healthy' foods like low fat yogurts, breakfast bars and fruit juices. For two months he recorded what was happening to his body on this new sugar regime, and the results were alarming, Gameau said.

The documentary spreads light on some of the ways sugar sneaks into our everyday lives.

“The film is all about the hidden sugars. One tablespoon of barbeque sauce has 2 teaspoons of sugar in it. Things like ketchup have a teaspoon of sugar in 1 tablespoon. Low-fat mayonnaises, pasta sauces are [all] full of sugar, and they’re things that people would never consider,” Gameau said.

In addition to unexpected sugary foods, people also need to be aware of sweet substances in disguise, he said.

“People need to look out for all of these health slogans on the labels that they use to make it look very healthy. You see these health slogans like ‘Packed with essential Vitamin D,’ and parents believe that,” Gameau said. “There are also a hundred alternative names like evaporated cane juice and grape mist—again all of it confuses the consumer.”

At the end of his sugar experiment, Gameau said he was pre- diabetic, had heart disease risks and gained 18 pounds and 4 inches of visceral fat around his organs— all the while eating the same amount of calories and following the same exercise schedule.

“They [calories] are the same on the plate, but once they enter the body they behave very differently metabolically, and trigger different hormones that affect appetite and all sorts of things. And that certainly happened to me,” he said.

The purpose of the film wasn’t to demonize sugar, but rather to create a better understanding of where it’s hidden and how much you’re really having throughout the day.

“The simple message of the film is that if you can eat real foods as much as possible, you're going to be fine,” Gameau said. “We just sort of say do whatever you can. If you still have to take your family to Taco Bell, then at least choose water instead of the soft drinks for now. And just try and have as much real food as you can because your body knows how to deal with that.”

Free sugars like glucose, fructose, sucrose and table sugars are often added to foods and drinks by the manufacturer. New guidelines from the WHO suggest that people cut their daily intake of free sugars to less than 10 percent of their overall calories.

One tip to watch your sugar intake is to know that when assessing labels for sugar, 1 teaspoon equals 4 grams, Gameau said.

“This term about grams of sugar is so ambiguous. We try converting it into teaspoons so that people can really understand and see what a teaspoon is. So if you see on the back of a juice 20 grams [of sugar], divide that by four, and you know there's 5 teaspoons of sugar in that juice packet,” he said. “And you'd never put 5 teaspoons in your cup of tea for your child, yet you'd give it in a juice quite easily. So people need to know that.”

“That Sugar Film” is available on iTunes and onDemand, and it is in theaters. For more information, visit thatsugarfilm.com.