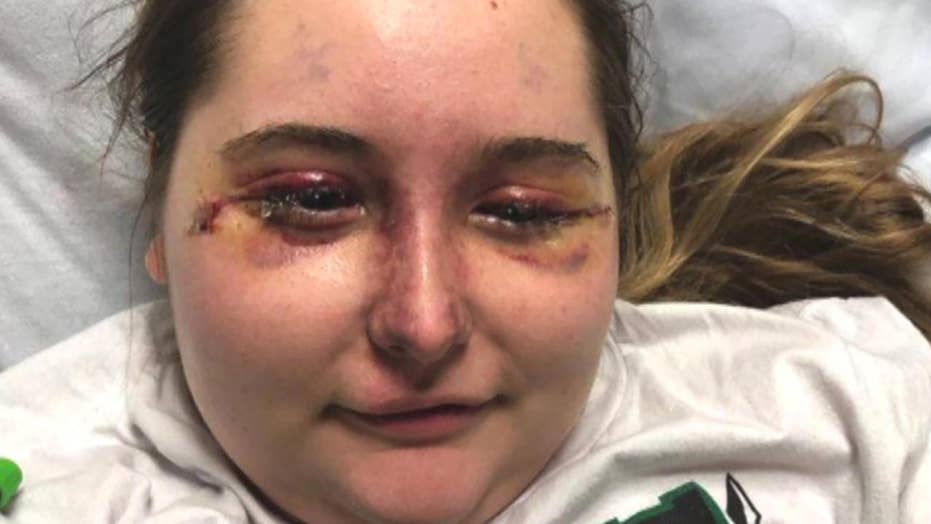 15-year-old Jordyn Walker has experienced puzzling physical symptoms including stomach pain, bloody stools and permanent blindness since returning from a family cruise in July 2017. Doctors have been unable to pinpoint a cause.

A Missouri teen has been left blinded by a mystery illness that’s been plaguing her since she returned from a family cruise in July 2017. Jordyn Walker, 15, was initially told the illness that robbed her of her sense of taste and smell last year had a “one in a million” chance of returning, but this December she landed in the pediatric intensive care unit at University of Kansas Hospital with severe stomach pain and blood in her stool as pressure built behind her eyes and her face swelled and turned purple, Fox4KC.com reported.

After 16 days of testing and two surgeries to reduce the swelling in her eyes and face, Walker was told the still-undiagnosed mystery illness had left her permanently blind.

“There’s no answers,” Kendyll Walker, the teen’s mother, told Fox4KC.com. “Nothing you can do.”

The family said every test that’s been run on the teen has come back negative. Their GoFundMe page has listed her described symptoms and potential diagnoses in the hopes that a doctor may come across the case and offer new solutions or theories.

“There has been no diagnosis to determine the cause of this event,” the “Jordyn Walker Has Gone Blind” GoFundMe page said. “There are many symptoms pointing to some sort of autoimmune disorder or vasculitis. However, more research and testing will need to be done to determine an overall diagnosis.”

The page said they are hoping to take Walker, who was released from the hospital on Dec. 31, to Mayo Clinic in Minnesota for further testing.

FORMER ANCHOR SAYS PRENATAL DEPRESSION MADE HER WISH FOR MISCARRIAGE

Kendyll Walker described the heartbreak her youngest daughter will feel at not being able to learn how to drive, or ever be able to see her two older sisters get married.

“It was terrifying to watch it happen all over again and knowing we couldn’t do anything about it,” she told the Fox4KC.com.

Videos posted to the “Jordyn’s Cause Funding Research and Recovery” Facebook page showed the family celebrating Christmas in the hospital with Walker, and her being reunited with her dog. One video taken before she was told she had lost her eyesight heard her wish to see again.

“Before the onset of Jordyn’s illness, she participated in many things that greatly relied on her eyesight,” the GoFundMe page said. “Jordyn has always been an avid reader and spectacular writer. She is passionate about photography and is the lead editor of her school’s journalism program.”

It also described her as a key member of her school’s archery team, and manager of the baseball team.

“Please spread the word,” the post said. “The human spirit burns brightest when we are united to solve a problem. We can’t imagine that her condition is so rare or so unique that it is beyond medical science in 2019.”

Walker told Fox4KC.com that she won’t let the illness stand in her way of a positive future.