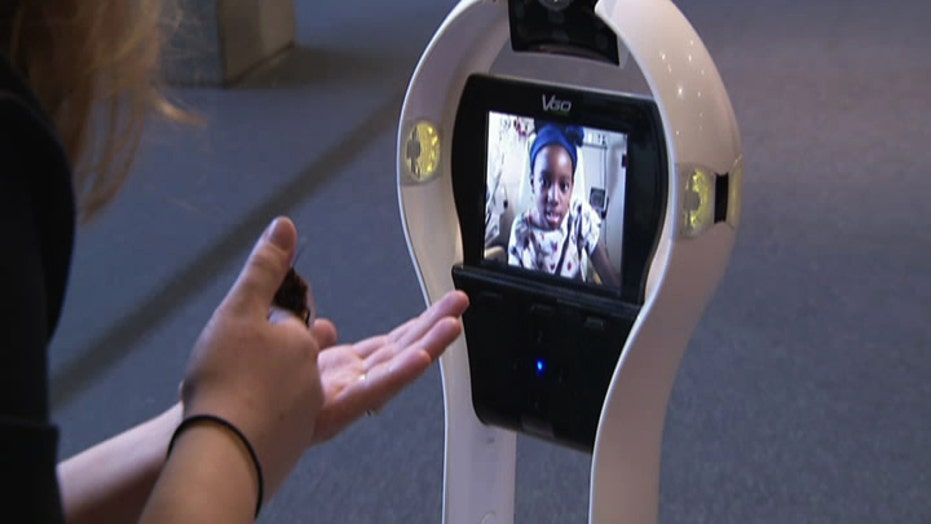 When children are diagnosed with cancer, their hospital rooms often become their new homes and they’re not allowed out because of their risk of infection. To help kids enjoy some normalcy, St. Louis Children’s Hospital is using a telepresence robot so they can virtually leave the hospital and explore in a new and unique way

Peyton Walton, of Poolesville, Md., has to stay at Memorial Sloan Kettering Cancer Center in New York for five weeks to undergo treatment for cancer. NBC Washington reported that the 10-year-old’s treatment will require her to be physically out of school for that length of time, separating her from her classwork and her friends.

But, thanks to a robot, Peyton will continue to participate in class as she battles cancer. The machine consists of a Segway-like rolling base and is attached to an iPad with a screen that shows the child’s face. An app connected with Bluetooth lets her control the robot from anyplace, including her hospital bed.

"As they see that robot in the hallways, that's Peyton," Douglas Robbins, principal of Poolesville Elementary School, told NBCWashington.com. "She's here, she's with us and she's going to engage in the school day, just like the rest of them."

Engineers around the United States are increasingly inventing technologies to help hospital-bound children participate in classes remotely or explore the outside world. For children like Peyton, the concept allows them not only to keep up with their schoolwork but also to feel less isolated, as many cancer patients can when they are in the hospital for weeks at a time.

Ten-year-old Levi Whitcomb, of Rollinsford, N.H., uses a similar robot to keep interacting with his classmates while undergoing chemotherapy for a life-threatening brain tumor.

Fosters reported that Levi hasn’t missed more than a few days of school with the help of a robot that is connected to his laptop. Springvale, Maine-based Grahamtastic Connections, an organization that provides technology to hospitalized children like Levi, shared the robot to the little boy.

Julie Person, a counselor at Rollinsford Grade School, where Levi attends school, told Fosters.com that the school was thrilled when the organization reached out with the idea.

“I tried to stress to the children how incredible it is that we can have this robot here,” Person told the news website. “We would rather not have it here because we would rather have Levi here, obviously.”

Sunnyvale, Calif.-based Double Robotics made the robot that Peyton uses. Donations from Peyton’s community helped purchase the $3,000 machine, according to NBCWashington.com.

"The benefit has been huge," Lynn Schaeber, Peyton’s mother, told the news site. "Peyton is able to have a little bit more autonomy in her education. She has control over her day-to-day activities in school, whereas cancer takes that from her, and really isolates her."