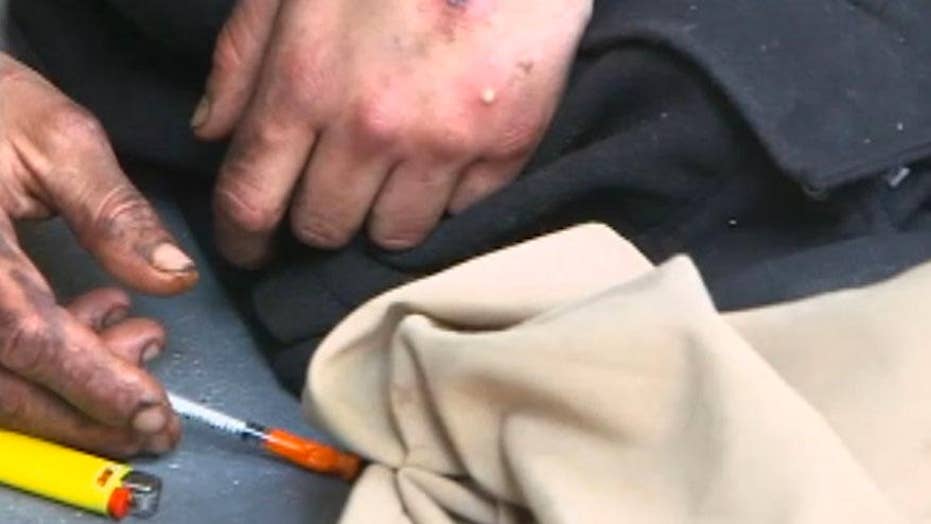 Some Philadelphia officials want to make history by pushing an effort to make the city the first in the U.S. to allow drug users to shoot up at a medically supervised facility.

The city overdose-related deaths peaked last year to about 1,200. And city health officials want to cut down on the overdoses and deaths through this unique – and controversial – approach.

“We haven’t seen a public health emergency like this in the last century,” said Thomas Farley, Health Commissioner for Philadelphia. “It’s time for us to rethink our assumptions, and consider options we hadn’t seen before.

Unlike similar efforts by other cities, the injection sites would not need City Council approval because they would be privately run.

Drug-related overdose deaths began to spoke in 2015 with the presence of fetanyl, according to Philadelphia Public Health . (Fox News)

The sites would give drug addicts a safe haven to shoot up and would offer sterile injection equipment, including needles, and Naloxone. It would also give referrals to treatment centers, social services clinics and wound care facilities.

The idea comes as a paradigm shift in the nation’s effort to stem the tide of opioid-related deaths. Seattle and upstate New York have been among places that have mulled similar measures, but the efforts stalled because of either legal or bureaucratic hurdles.

Canada and Europe have operated similar types of facilities for the last few decades.

“There is a particular site in Vancouver [Insite] that has operated for some 15 years with thousands of overdoses, and not one single death,” Farley said.

But in Philadelphia, the so-called “life-saving plan” does face several layers of opposition – the first being the federal government.

The sites would give drug addicts a safe haven to shoot up and would offer sterile injection equipment, including needles, and Naloxone. It would also give referrals to treatment centers, social services clinics and wound care facilities. (REUTERS)

“They are in legal nomads land,” said Robert Field, professor of law and public health at Drexel University. “This [announcement] does not make shooting up legal. What it is, is a decision about what to prosecute, and the city is deciding it will not use its police to prosecute the people who shoot up in the safe injection site.”

The city’s decision to permit supervised drug usage parallels the nation’s marijuana legalization, where individual states have approved a practice that is illegal under federal law.

“American culture and ethics are not those of Canada,” Field said, “so it’s an experiment.”

An experiment that cities across the nation are looking at as a potential solution to the country’s rising drug problem. In 2017, Seattle made efforts setting aside $1.3 million to establish sites but was unable to clear legal hurdles to open its doors.

Unlike Seattle, Philadelphia does not plan to operate or pay for the proposed sites. Instead, it hopes to serve as the facilitator between the public and privately run facilities – bypassing city council approval and special zoning ordinances, and casting what some critics see as an irresponsible cattle call for investors.

“The problem there is no plan,” said Philadelphia Councilwoman Maria Quiñones-Sanchez. “The city lacks the bold leadership to lead, manage and own the problem.”

Kensington, a neighborhood in North Philadelphia, is known for an abundance of open-air recreational drug markets and drug-related violence. (Fox News)

The councilwoman’s district is at the heart of the city’s drug-crisis, and she fears that top-down decision will worsen the quality of life for community members.

“Hundreds of children have been traumatized by encampments of homeless persons on [drug] binges openly doing drugs and having sex, and it’s unacceptable,”Quiñones-Sanchez said.

The councilwoman said a failure to empower law enforcement has created a public safety issue in the city.

“Now we rush to make headlines as the first American city to open an injection site, but we are abdicating our responsibility to address both the health crisis and the community crisis that the encampments have created,” said Quiñones-Sanchez.

While the city can move forward, it is unclear if council members will attempt to delay the rollout by imposing restrictions on the placement and management of the sites. Even if they can agree to comprehensive reforms, the proposal is still not without challenges. Pennsylvania Gov. Tom Wolf has not publically supported the plan – though he did take drastic steps recently to sign a statewide disaster declaration.

The facility in Philadelphia may be modeled after a similar facility in Canada, which allows users to take drugs in a supervised medical facility.

Philadelphia has the highest opioid death rate of any large U.S. city, outpacing New York and Chicago. Philadelphia officials believe these supervised injection sites are the answer to the city’s drug problem.

“If we don’t do this, more people are going to continue to die,” Farley said. “Imagine if your daughter was out there injecting heroin every day – you would try everything you could do to keep her alive.”