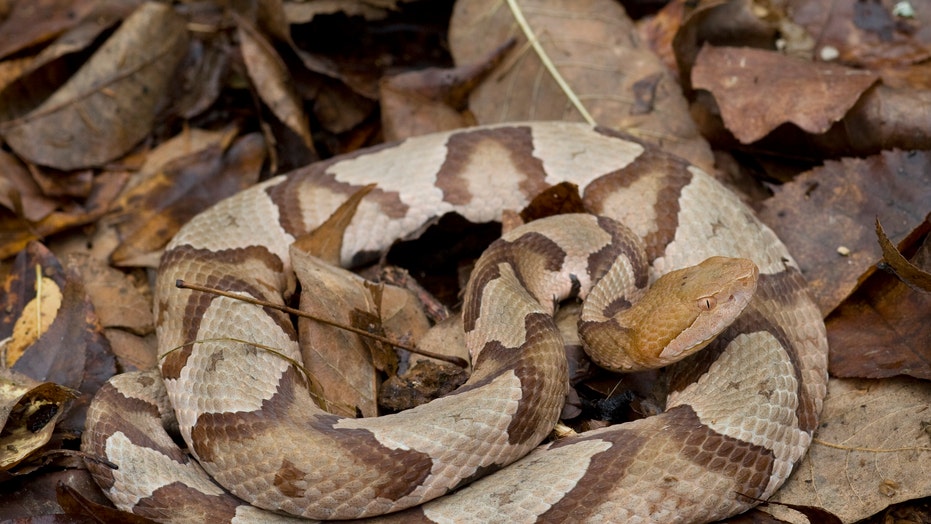 A Pennsylvania woman was treated for pain and swelling at a hospital on Tuesday after a venomous snake bit her on the arm while she was doing laundry.

Judy Reed, of Mount Penn, was walking down to her basement when a 2-foot-long copperhead snake sitting on a ledge near the washing machine sprang out and bit her, the Reading Eagle reported. Reed was treated by paramedics and taken to Reading Hospital, where she was monitored overnight.

“She was in a lot of pain, there was a lot of swelling, and she had tingling in her arm” after the bite, her daughter, Danelle, told the paper. Reed's boyfriend, Harry Sleigel, told WFMZ-TV she was expected to be OK.

Officials from the Pennsylvania Fish and Boat Commission bagged the reptile and moved it to a safe location, the Eagle reported.

While copperhead snakes are venomous, they usually avoid humans, according to the Pennsylvania Fish and Boat Commission. (iStock)

The snake could have been seeking refuge from a recent spate of soggy weather and slithered into the basement through holes in the home’s foundation, Detective Sgt. Deron Manndel of the Central Berks Regional Police Department told the paper.

The copperhead is the most common of the three venomous snakes known to inhabit the state, according to the Pennsylvania Fish and Boat Commission. The other two species, also part of the pit viper family, are the timber rattlesnake and eastern massasauga.

Reports of snake bites are rare in Pennsylvania — as the three species are typically not aggressive and tend to avoid humans, the group says.