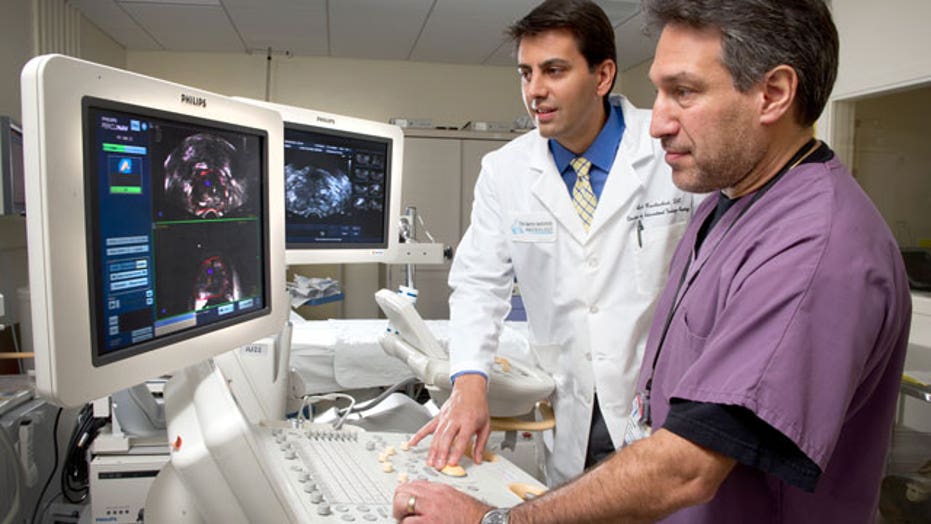 Imagine having a GPS system to pinpoint cancer in the body -- that’s what technology is doing for prostate cancer. Using a new MRI ultrasound fusion screening device, doctors can detect tumors that would have otherwise been missed

Fifty-seven-year-old Ed Downey thought he was the picture of health – with a long life ahead of him with his wife and two sons.

But a trip to the urologist threw him a curve ball after his doctor analyzed his prostate-specific antigen (PSA) score.

“Basically it was increasing some over time, so he was a little concerned about that and thought we should take the next step,” Downey told FoxNews.com.

For the past 30 years, doctors have conducted a digital rectal exam, followed by an ultra-sound guided biopsy, in response to an increasing PSA score.

But this technique has run into problems.  According to Dr. Art Rastinehad, an interventional urologic oncologist from North Shore LIJ Health System in Manhassat, N.Y., prostate biopsies blindly select areas of the prostate to sample.

“We were limited by our technology,” Rastinehad explained. “Most men that have these abnormalities and undergo a biopsy, only 22 to 40 percent of them have cancer on that biopsy. That leaves about 70 percent of men with a negative biopsy – but it's still unclear if they had cancer or not.”

Now, a new method may bypass this issue of a “blind” biopsy.  In a way similar to using a GPS, doctors can utilize MRI ultra-sound fusion technology to target specific locations in the prostate to biopsy.  With this technique, Rastinehad was able to pin-point a suspicious tumor and diagnose Downey with cancer.

If he had used the older methods and technology, Downey’s tumor would have been missed.

“Who knows, by the time they found it, it could affect other areas; it could've spread,” Downey said. “I don't even want to think about it. It's a little too scary to think about, so I'm very happy it was found early, it was eradicated and I can live a full, complete life.”

Rastinehad said that MRI ultra-sound technology will soon be a big game changer in the prostate cancer field.

“If you're able to catch patients with intermediate risk prostate cancer early and leave out the ones that don't, and then stratify treatment based on that…they are not going to be impacted by that disease, Rastinehad said. ”That is our goal for treatment as urologists. That the patients benefit from what we do for treatment.”

To learn more about this new technology, visit http://smart-biopsy.com.