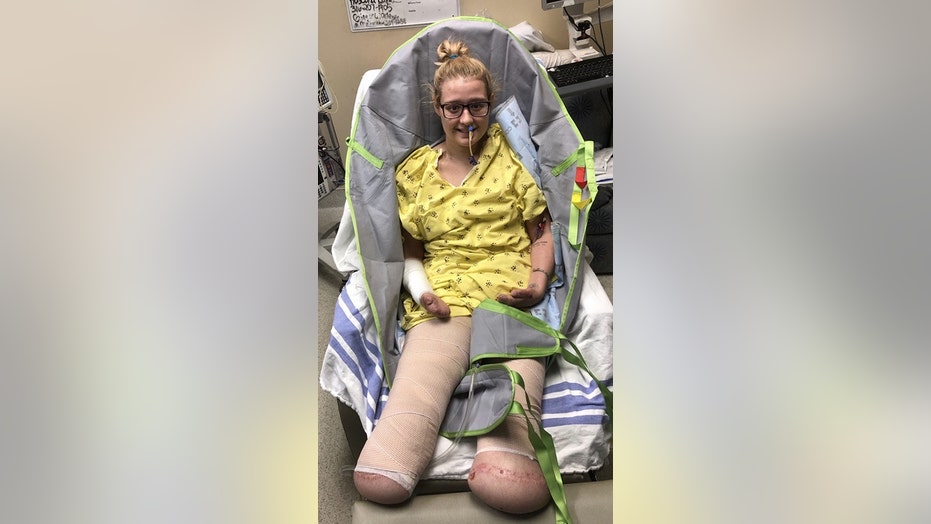 A Kansas mother of two who contracted a deadly infection following a laparoscopic hysterectomy in November 2018 said she is grateful to be alive with her children despite losing both legs below the knee and nearly all of her fingers.

When she woke from a coma, she discovered her fingers and lower legs had turned black.  (Kennedy News & Media)

“I don’t even remember them telling me that they were going to do the amputations,” Lucie Kline, of Derby, previously told KSN.com. “I just kind of woke up with them. It’s unfortunate, but it’s a small price to pay for my life.”

The trouble started for Kline hours after she was discharged from the hospital when she developed a high fever and was short of breath. The next day, she felt groggy and headed back to the hospital. There they found fluid in her abdomen and sent her to a larger hospital, where she was diagnosed with a sepsis infection.

She underwent a total of 25 surgeries including multiple amputations and operations to cut away dead tissue.  (Kennedy News & Media)

“When I got to the hospital, [my health] declined pretty quickly,” she reportedly told Kennedy News & Media. “My blood pressure dropped, I stopped breathing on my own. I became very, very sick very quickly.”

She then fell into a coma for two weeks, and when she woke she found her hands and feet had turned black. She underwent a series of surgeries, including her first round of amputations in December and January. In total, she underwent 25 surgeries to remove dead tissue and prevent infection from spreading.

In May, a Facebook post led to her being fitted with prosthetic legs. She learned how to walk with them alongside her toddler son, who was also figuring out how to navigate the world on two feet.

She said she remains positive so she can be a role model for her two children.  (Kennedy News & Media)

She said that while she could have never imagined that her life would be as it is now, she is grateful to be alive to see her two kids grow.

“They are just a big part of why I have to stay positive,” she previously told KSN.com. “I have to be a role model for them and I don’t want them to be sad either.”