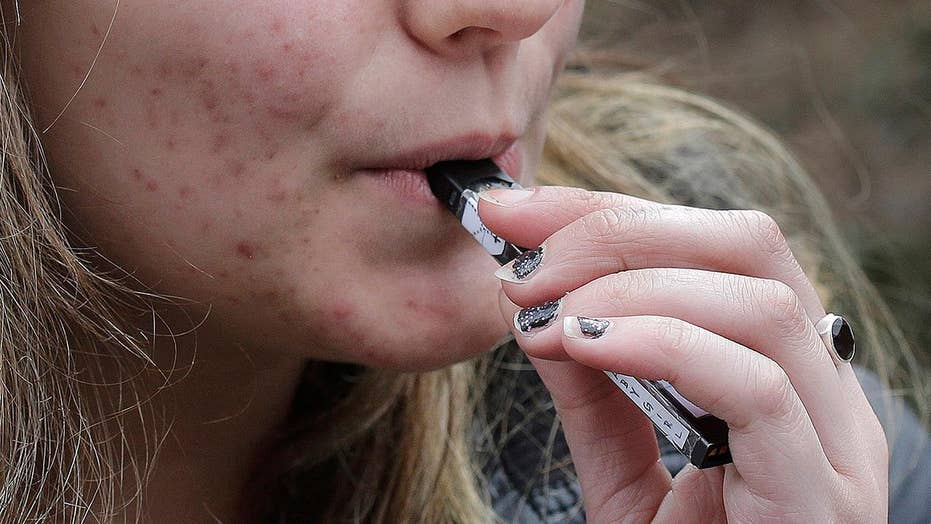 Dr. Siegel: Vaping flavor ban is step in right direction, but more needs to be done

U.S. officials on Tuesday said a coalition of 39 states will investigate whether the e-cigarette giant Juul Labs deliberately marketed to youths with misleading claims about the nicotine content of its vaping products.

Attorneys general from Connecticut, Florida, Nevada, Oregon and Texas said they will lead the multi-state investigation into San Francisco-based Juul, which also is facing lawsuits by teenagers and others who say they became addicted to the company's vaping products.

FILE: A cashier displays a packet of tobacco-flavored Juul pods at a store in San Francisco.  (AP)

The state officials said they also will investigate the company's claims about the risk, safety and effectiveness of its vaping products.

"I will not prejudge where this investigation will lead," Connecticut Attorney General William Tong said in a statement, "but we will follow every fact and are prepared to take strong action in conjunction with states across the nation to protect public health."

The company said in a statement it has halted advertisements and eliminated most flavors in response to concerns by government officials and others.

"We will continue to reset the vapor category in the U.S. and seek to earn the trust of society by working cooperatively with attorneys general, regulators, public health officials, and other stakeholders to combat underage use and transition adult smokers from combustible cigarettes," the statement said.

Launched in 2015, Juul's meteoric rise has been followed by a hasty retreat in recent months amid a nationwide political backlash over vaping.

Although Juul remains the dominant player in the U.S. vaping market, it has made several concessions, including halting its advertising and pulling many of its flavors from the market.

The FDA and a congressional panel are investigating whether the company's early marketing efforts targeted minors.