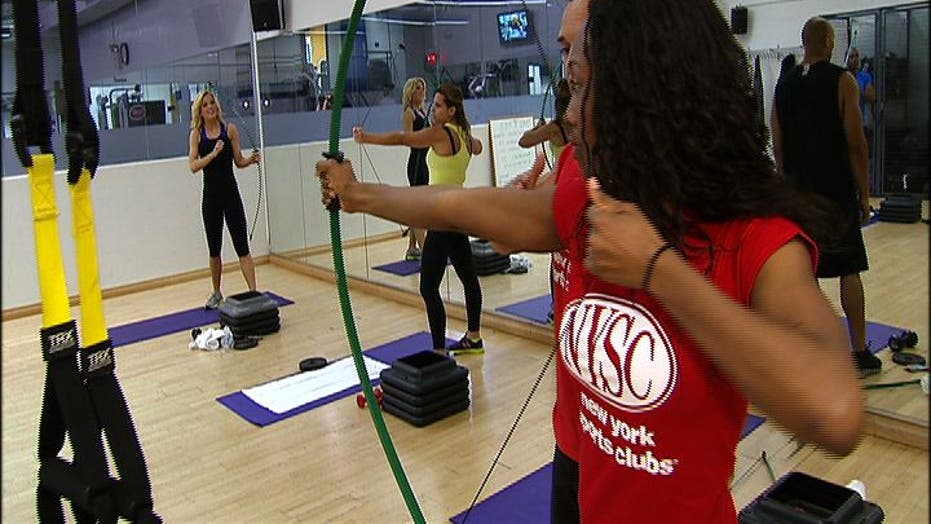 The recent release of the movie “The Hunger Games” is causing a frenzy, with themed t-shirts, buttons, tattoos and recipes. Now you can even learn how to survive like your favorite tribute at New York Sports Clubs

Hunger Games fever has caught the country by storm.

With the release of the movie adaptation of Suzanne Collins’ hit dystopian novel, fans are eager to bring a little bit of Panem into their own lives.  From Hunger Games gifts, recipes and tattoos, people are finding many ways to be just like their favorite characters.

And now, fans can get in shape like lead heroine Katniss Everdeen – with the Hunger Games workout.

New York Sports Club, a chain of gyms in New York City, is offering the “Train Like a Tribute” workout, in which participants pretend to be tributes from the 12 districts of Panem as they train for the Hunger Games arena.

“The whole thing came from the design of one our classes called the USFX classes, which is similar to what you get in the games,” Eric Salvador, New York Sports Clubs Master Trainer and creator of the  “Train Like a Tribute” workout, told Foxnews.com.  “Those high intensity, cardio, body weight, functional movements are all tested in a competitive nature.  It’s subscribing to that idea of the ultimate athlete and survival of the fittest.”

Salvador and his co-instructor Fawn Cronin both take on the roles of lead characters Peeta and Katniss, respectively, who train the incoming tributes for the “arena.”

“The entire workout is a role play,” Salvador said.  “I’m definitely kind of like Peeta where I’m more of the good guy and my counterpart, Katniss, is a little meaner and kind of grumpier.  Then we award them with stuff from ‘sponsors,’ such as water and energy bars or lighter weights during circuits.”

In the spirit of competition, tributes compete in various rounds where they do exercises that pertain to the games:

This move is meant to mimic Katniss’ most famous skill – archery.  Tributes use actual bows and pretend to shoot arrows like the lead heroine.  While standing in an archer’s stance, participants pull the bow back until taut.  But instead of releasing the bow string, they bring their arms back to starting position and repeat until finished.

In a way to improve tree climbing skills, the capitol crunches help participants improve their core strength.  Tributes lay flat on their backs, with a weight extend above their heads.  They are then told to do a number of full sit-ups while keeping the weight above their heads.

In the books, the Capitol is known for creating freak-like mutations used to help keep its citizens in line.  Mutated birds known as “jabberjays” are used to spy on Panem citizens and report what they say to Capitol officials.  In the “Train Like a Tribute” workout, jabberjays are also keeping tributes in line by making them do jumping jacks while crossing their legs.  This helps them improve their speed and agility for the games.

In order to build strength, participants position dumbbells by their shoulders and then extend them upwards over their heads.

Throughout the workout, the instructors surprise participants with ‘fireballs’ or ‘mutant animal attacks,’ and they have to do specific exercises to avoid harm.  Once the workout has ended, the tribute who has completed the most rounds is declared the “winner” of the Hunger Games and is presented with a mockingjay pin – the symbol worn by Katniss when she competed in the games.

The instructors said overall their participants have really enjoyed the workout – with many of them feeling like they’re actually preparing for the games.  Salvador said the success of the workout lies in its competitive nature.

“We threw the competitive nature into it, and that really riled everyone up,” Salvador said.  “The fact that you’re actually competing against other tributes - they get so in to it, and they really get a great workout.  They’re doing almost everything - bear crawls, bow and arrows - then we throw these disasters at them. From mutant dogs to tracker jackers, they love it.”