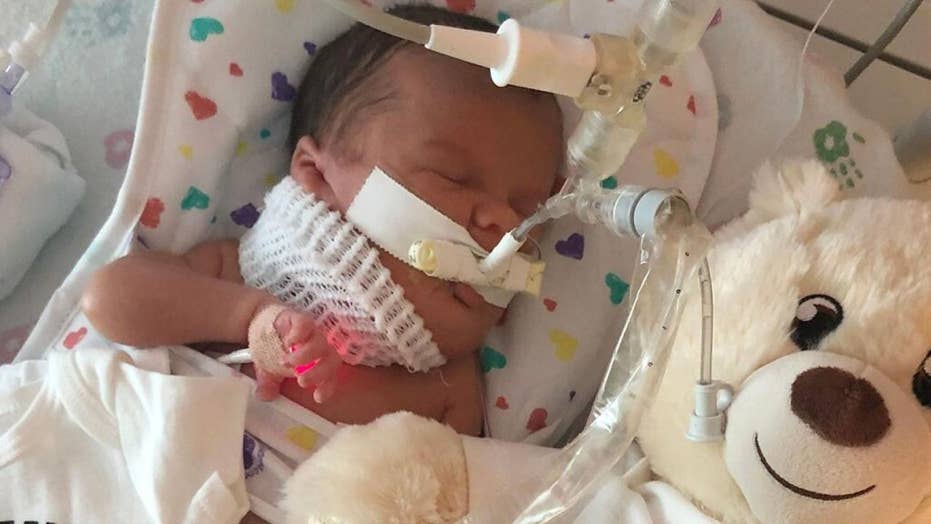 An Illinois baby was born with a 5-inch growth on her neck. The birth defect, known as a cystic hygroma was removed shortly after birth.

For weeks, expectant parents in Chicago could only watch as a giant cyst-filled sac on their unborn daughter’s neck swelled to be larger than her head. Tabitha Pilarski and Daniel Burgess found out during a 20-week ultrasound that their unborn daughter, Bella-Rose, had a cystic hygroma that would require immediate attention after her birth.

BABY BORN THROUGH EMBRYO DONATION YEARS AFTER BEING FROZEN, STORED

“She’s our miracle baby, she’s such a fighter and has defied all of the odds, we had to stay positive for her throughout the entire pregnancy,” Pilarski, 24, told Caters News.

Bella-Rose Burress was born with a cystic hygroma that had grown to twice the size of her head. (Caters News Agency)

A cystic hygroma, or lymphangioma, is a birth defect that appears as a sac-like structure with a thin wall that most commonly occurs in the head and neck region of an infant, according to Johns Hopkins Medicine.

Treatment typically involves surgical removal, but in some cases the growth can invade other parts of the neck, making it impossible to operate. In those cases, doctors may opt to attempt treatment with chemotherapy medications, radiation therapy, steroids or injection of sclerosing medications, but it is not guaranteed to have success.

By the time Bella-Rose was born on Aug. 27, the growth had reached over 5 inches in size, which left her father in shock.

A team of 40 doctors oversaw her birth so they could take immediate action in removing the growth, which had doubled in size while she was in utero.  (Caters News Agency)

“During the delivery they had 40 doctors watching who were in separate teams working on their own part of the birth, it was terrifying,” Burress told Caters. “I was not allowed in the operating room, I must have paced three or four miles around the hospital whilst the birth was happening. As soon as I saw Bella come out of the room I was crying like a child, it was very emotional. I was sick to my stomach when I first saw the growth because I was in so much shock, I expected a tennis ball-sized growth, but it was twice the size of her head.”

While Burress said he “just froze and cried,” Pilarski said she didn’t even see the growth until doctors showed her pictures, and described it as “probably the scariest moment of my life.”

Her parents said she is expected to join her siblings at home in October, and that she is recovering well from surgery.  (Caters News Agency)

“The doctors knew how big it was going to be, but we didn’t, they said they had a plan and as long as the plan worked Bella would be fine,” Pilarski told Caters.

Bella is now on her way to a full recovery, according to her parents, and is expected to join her five siblings at home in October. The engaged couple said their bond has been strengthened from their experience, and that they can’t wait to watch Bella “grow up and have a normal life.”

“She’ll have quite the story to tell her friends,” Pilaski told Caters.