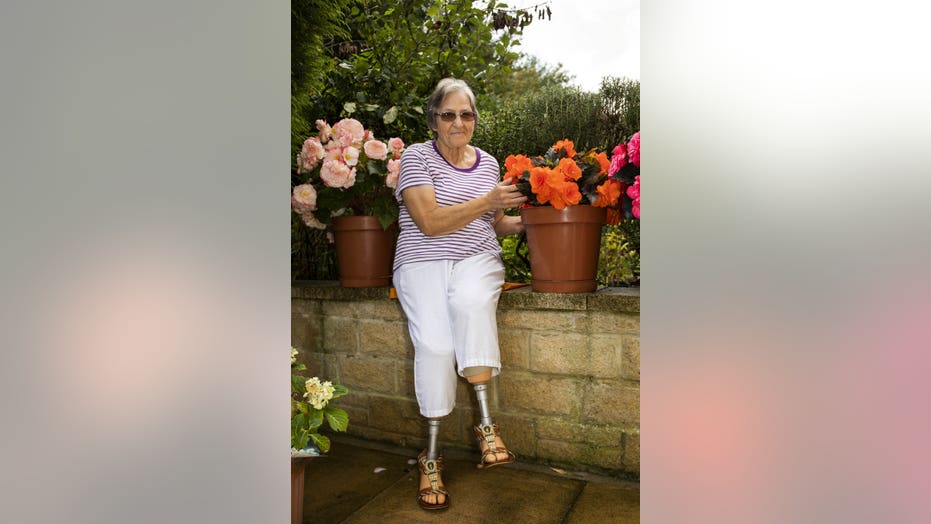 A 68-year-old woman is learning to live without her legs and fingertips after a bug bite landed her in the hospital for eight months, three weeks of which were spent in an induced coma.

Susan Buttery, of Wiltshire, England, said she initially thought her reaction was an allergy to something.

“I had flu-like symptoms and I was vomiting, so my husband Richard rushed me to the hospital where they were supposed to keep me on overnight,” she told SWNS. “Richard came back the next day to see me, but they had put me in an induced coma in ICU. The consultant said to my husband: ‘You’ll be lucky if your wife is alive on Monday.’ But I’m still here.”

Buttery said she spent eight months in the hospital and underwent 60 surgeries.  (SWNS)

The trouble for Buttery began when she was bitten by an unidentified bug while gardening. The bite was infected, and she was eventually diagnosed with Group A Streptococcus, which led to sepsis and necrotizing fasciitis.

MAN BEHIND 'BLINKING WHITE GUY' GIF RAISES OVER $25,000 FOR MS WITH HELP OF VIRAL FAME

Group A strep bacteria live in the nose and throat, and can be spread through droplets that become airborne from coughing or sneezing or contact with mucus, according to Sepsis.org. The droplets may land on an object that you later touch, but if the skin is infected, the bacteria can come in contact with a spot of skin that has an open wound, scrape or bite. When the bacteria enters the body, it can cause infections such as necrotizing fasciitis and toxic shock syndrome.

Symptoms may begin first as flu-like ailments, as was the case for Buttery.

Despite losing her fingertips and legs, she said she still loves gardening. (SWNS)

Buttery told SWNS that she endured 60 operations while hospitalized, including the amputation of both legs and her fingertips.

“When they said they had to take my legs, I just talked to myself, ‘Well they’ve got to go otherwise I’m going to die and I just wanted to try to get back to as normal as possible, as soon as possible,” she told the news outlet.

Despite her ordeal, Buttery said she still loves gardening and is “not scared.”