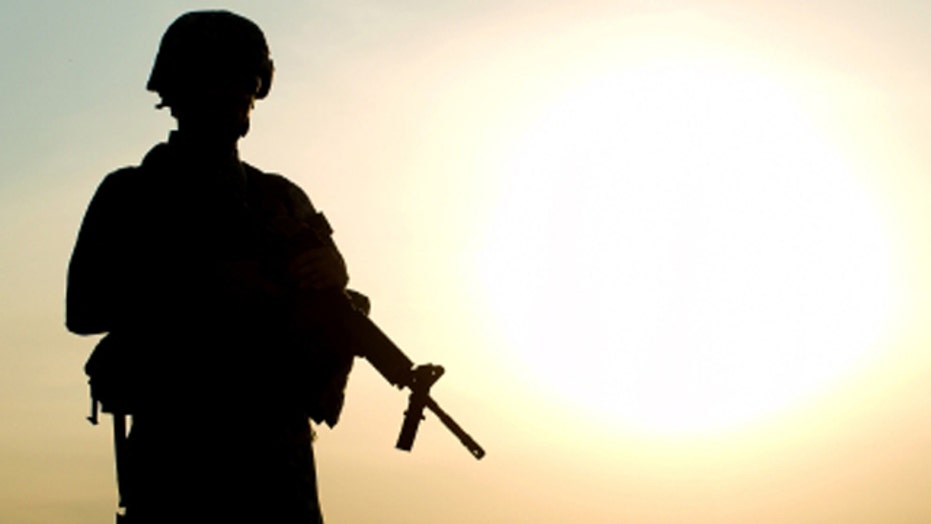 The VA has treated more than 130,000 post-9/11 veterans for PTSD. These men and women have a hard time re-adjusting to everyday life and are left with insomnia, flashbacks and depression. Talk therapy and medications can help, but Dr. Eugene Lipov says an injection in the neck will help vets get back on their feet

A federally-approved injection is offering new hope to veterans suffering from post-traumatic stress disorder (PTSD).  The injection, which takes approximately 15 minutes to administer, has led to dramatic improvements in some veterans who suffer from the disorder.

With 23,000 soldiers set to withdraw from Afghanistan this year, somewhere between 11 to 20 percent of them will suffer from PTSD, according to estimates from the Department of Veterans Affairs.

PTSD is an anxiety disorder that typically follows exposure to a traumatic event such as combat, disaster or assault.  Symptoms include nightmares, jumpiness, paranoia, irritability and aggressiveness.  It is often accompanied by depression, substance abuse or other anxiety disorders.

According to Lipov, PTSD sufferers who have been administered the block have reported relief from symptoms in as little as 30 minutes.

Lipov has received a waiver from the FDA to perform SGB and is currently recruiting participants for a clinical trial.  SGB, which has also been used in the past to treat depression, schizophrenia, psychosis, and other mental health disorders, is not backed by the Department of Veterans Affairs for treating PTSD in soldiers.

For the treatment, local anesthetic – commonly used in epidurals during labor – is injected into a collection of nerves in the neck known as the stellate ganglion.  These nerves are connected to various parts of the brain, including the amygdala, which are thought to be associated with PTSD.

One theory behind the development of PTSD suggests that when a person is under massive stress, the level of nerve growth factor (NGF) in his or her system increases.  NGF prompts the growth of new sympathetic nerves, which release a hormone called norepinephrine.

Norepinephrine underlies the “fight-or-flight” response in the body and directly increases heart rate and blood pressure.  Researchers such as Lipov believe high levels of NGF in people with PTSD are directly responsible for their heightened sensitivity to environmental stimulus.
SGB essentially “turns off” the NGF activity, leading to the decline of norepinephrine in a person’s system.

“As long as NGF continues to be active it maintains the extra growth of [sympathetic] nerves, or ‘leaves,’” Lipov said.  “NGF is the fertilizer for these leaves, so the procedure takes away the fertilizer.”

So far, Lipov has treated 65 patients from 25 states and one person from New Zealand.  The cost of the injection is approximately $1,000 and is fully covered by his non-profit Chicago Medical Innovations.  However, Lipov said in order to keep performing the procedure, the organization needs donations.

Lipov said the procedure works in 70 percent of patients, and they show at least 50 percent improvement in symptoms.

“The most marked improvement is in sleep –the nightmares going away,” he said.

For some PTSD sufferers, like Raleigh Showens, 65, of McHenry, Ill., the injection is a last resort measure to find relief – and literally, a matter of life or death.

Showens, who was a MedEvac for 19 months, said while he never saw combat in Vietnam, he witnessed the horrific results.

“I saw the death and destruction, and I was just 19,” Showens said.  “We flew in Easter Sunday of ’67, and we were loading a lot of bodies in…I was sick, and I had a nurse come up, put her arms around me and say, ‘Soldier, you’re going to have to get tough.’”

While Showens learned to block out things he saw during the war, when he returned home a year and a half later, he had trouble re-adjusting to civilian life.

“My family and friends all said, ‘You’re not the same person,’ and it bothered me,” Showens said.  “I could see the difference, too.  I was short-tempered and on edge all the time, but I didn’t know what to do about it.”

Showens turned to alcohol to bury his problems.  The VA also prescribed him various medications to help with his depression and sleeping problems.

Iraq veteran Chris Carlson, 41, from Lombard, Ill., did two tours in Afghanistan and one in Iraq during Operation Iraqi Freedom, and reported similar experiences when he came home.

“I started reliving some of the experiences and what I saw,” Carlson said. “I had horrible nightmares and would wake up in cold sweats.  It got worse and worse as time went on.”

Carlson said he would wake up and start drinking alcohol.  “Instead of coffee, I’d be drinking beer first thing in the morning,” he said.

Showens lived with his symptoms for more than 40 years until December 2010, when he met Lipov at a political rally.  At the time, Showens was contemplating the idea of committing suicide.

The injection was a last ditch attempt to cure his PTSD.  “If it didn’t work, nobody could look at me and say, ‘You should have tried this, and you didn’t,’” Showens said.  “I didn’t even think about it or hesitate.  What difference would it make? I already had my destiny planned.”

Showens went in for the injection on December 20.  Despite his expectations, within a half hour, he felt relaxed.  But something even more remarkable happened later that night.

“I had had nightmares – pretty much destroyed the house every night since 1968,” Showens said.  “I can honestly say that night was the first time I slept all the way through the night without a nightmare.”

He added when his nightmares returned a week later, he had to go back in for a second injection.  Since then, he’s been living without PTSD symptoms and off medications.

“We don’t know why sometimes it takes more than one block to [relieve PTSD symptoms],” Lipov said.  “I think sometimes the first doesn’t take away enough NGF.  Sometimes, we have to do five or six injections.”

Carlson experienced drastic improvements as well after his first injection.

“I was skeptical,” Carlson said, “Like, a needle in my neck, how will that help me? But immediately I felt so much better physically, mentally and emotionally.”

Carlson ultimately required a second injection, like Showens, but said he has been symptom-free for 10 months.  He has also stopped drinking.

“It’s really hard to explain,” Carlson said.  “I was in this deep depression, hearing things, always looking out windows or under doors…but now all that stuff isn’t affecting me. I just feel so much better.”

Standard treatments for PTSD include psychological approaches such as cognitive behavioral therapy and a class of medications called selective serotonin reuptake inhibitors (SSRIs), often used in conjunction with one another.

However, according to Dr. Paula Schnurr, deputy director at the National Center for PTSD, only 30 to 40 percent of patients officially go into remission from these treatments.

The actual remission rates may be higher, according to Schnurr, but it can be difficult to gage success in a rigorous, scientific study.

The VA and Department of Defense fund select experimental treatments for PTSD, not including SGB, which Schnurr said they choose based on evidence supporting the treatments and outcomes of the patients.

“In the field, we’ve got more treatments but also challenges to make them better and more efficient and more effective in patients,” Schnurr said.  “We’re not 100 percent there yet.”