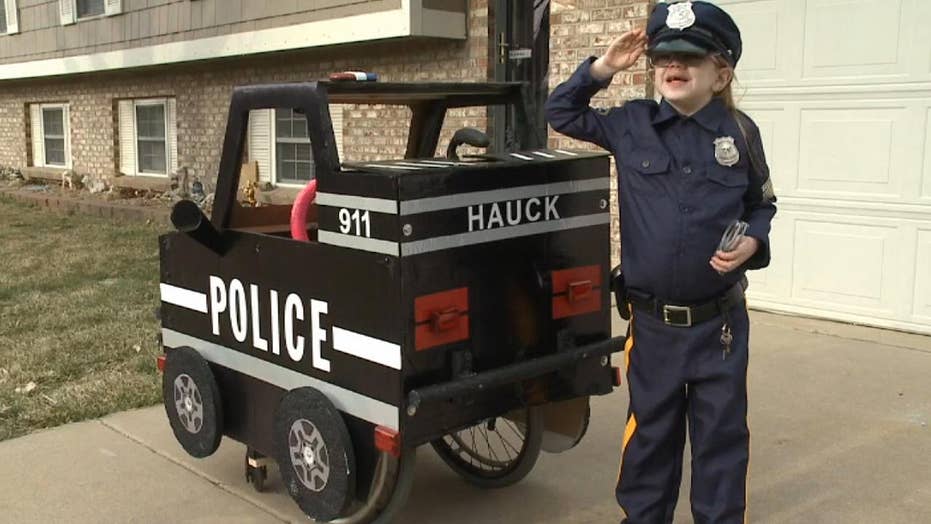 Colorado father turns daughter's wheelchair into a police car with lights and siren so his 7-year-old, with an epileptic condition that can deplete her kidneys and eyes, can have more fun.

There’s a new “sheriff” in one Colorado town thanks to the innovative thinking of a dad who turned his law enforcement-loving daughter’s wheelchair into a police cruiser of her very own. Haley Hauck, a 7-year-old who according to her family has an epileptic disorder, even has working lights and a siren on her cruiser.

“I made it so that she can have fun,” her father, whose name was not revealed by KDVR, said. “So that, when she gets in and out of a wheelchair, she has an idea of why she needs a wheelchair, but now it’s fun.”

Decked in a mini-police officer’s uniform, Haley is eager to cuff her mom and speed down the streets in her cruise. According to KDVR, she received a visit from a Thornton police officer on Halloween so she could take a look at the real deal up close.

The police department recently shared photos from their visit on their Twitter page.

“Thanks for joining the force, it is an honor to work with you,” the post, featuring photos of Officer John Carter and Haley, said.