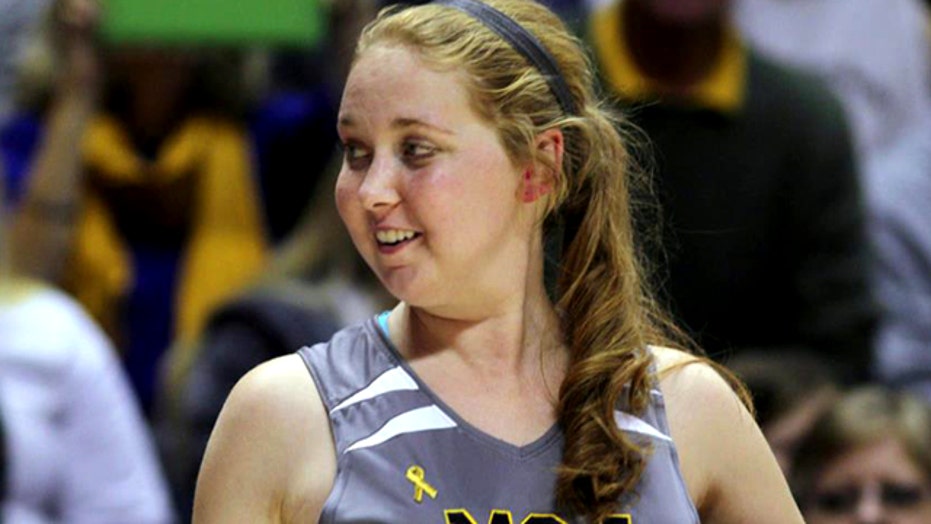 The Mount St. Joseph student gained international attention when she decided to play on the freshman basketball team even as her inoperable brain tumor was sapping her of coordination and energy. She played the team’s opener against Franklin College and scored two points before being replaced in the first quarter.

“This was my dream, to score on this floor, and it felt amazing,” Hill told WLWT.

“Through Lauren’s fundraising and advocacy efforts, she not only became a spotlight on the lack of funding for cancer research, but she most certainly has become a beacon guiding researchers for years to come,” The Cure Starts Now co-founder Brooke Desserich wrote on the Facebook page.

"She's made an impact on the world, more so than me — more than I ever will do," her coach Dan Benjamin told the Associated Press on Monday. "I've gotten so many emails and phone calls from all over the world. People are contacting me because they want to share her story."

Hill’s mother, Lisa Hill, updated supporters through the Lauren’s Fight for Cure Facebook page. On Sunday, she posted a photo of Lauren carrying an Easter basket, wearing yellow streamers as a wig.

“Lauren was so excited the Easter Bunny came. Then she decided to make herself a blond [sic]. Crazy girl,” read the caption accompanying the photo, which over 16,500 people “liked.”

On April 1, the family updated that her status had not changed much since appearing on ABC’s “The View” in March. Hill still experienced occasional headaches and was very tired, but her humor remained intact, the post read. While appearing on the TV show via satellite from Cincinnati Children's Hospital Medical Center, she was named their first “Viewer of the Week” and honored with a $15,000 donation from one of the show’s advertisers, RetailMeNot.com.

In March, Lauren’s Fight for Cure posted that Hill was sleeping about 12 hours a day and her appetite was beginning to decrease. Swallowing became increasingly difficult, and her caregivers had to cut her food into bite-sized pieces to prevent her from choking. She also continued to battle painful headaches and bodyaches.

Upper Deck created a Lauren Hill trading card, with proceeds benefiting The Cure Starts Now. The cards are $10, and the site offers #Layup4Lauren T-shirts and wristbands.

In February, Hill was honored with Ohio’s ‘Courage Award’ from Ohio Gov. John Kasich and celebrated the end of Mount St. Joseph’s basketball season at a banquet with her teammates, insisting on signing each player’s jersey— which the Hill family paid for— even with barely enough strength to hold her head up, Local12.com reported.

“We love you like sisters,” her mother, Lisa Hill, said, “so it's our honor to do this.”

Lauren Hill told Local12.com at the time that she worried about leaving her family and feared they’d wake up one morning to find she wasn’t breathing.

“Day by day, I hope my message has resided through everyone— that just even more that it’s precious every amount of time you get with someone, no material item matters,” she told Local12.com. “Every moment you get with someone is a moment that [is] blessed, really blessed.”

Lawrenceburg High School retired her jersey number in November in honor of her inspirational fight. Hill was the 2014 homecoming queen, and in January returned to her alma mater to crown the new king and queen, according to WCPO.com

In November, LeBron James, Billie Jean King and Pat Summitt were among the many sports figures who paid tribute to Hill on social media, after her inspiring basketball game.

James's Instagram ran a photo of Hill making her first layup, with the caption:

"You are simply and truly "AMAZING" Lauren Hill!!! Thank you for inspiring me and I'll try my best to match you! Congrats on your game. Also be looking out for a package from I to You! You're Awesome!!!"


Former Tennessee coach Summitt was at Hill's game to present her with the Pat Summitt Most Courageous Award. According to WCPO, Summitt, who suffers from Alzheimer's disease, drove four hours to get to the game.

Click to donate to The Cure Starts Now Foundation.