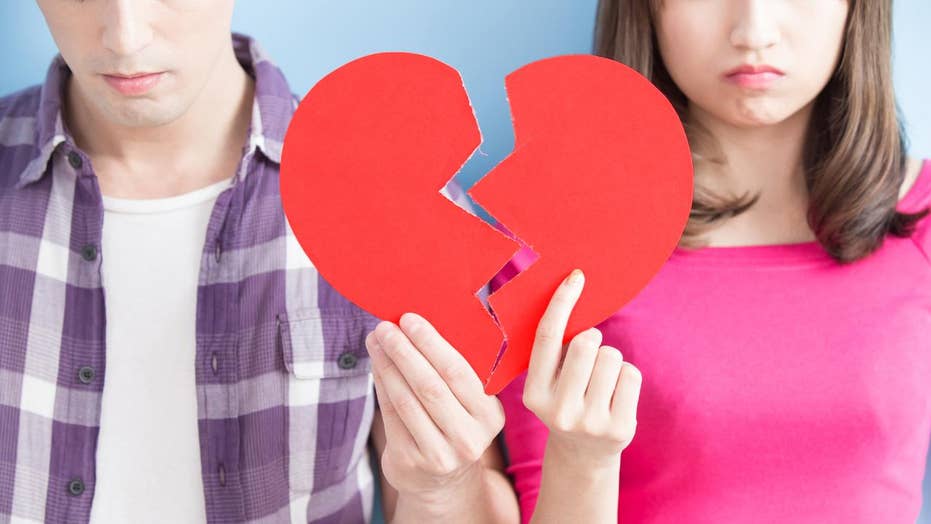 Broken heart syndrome: Could it happen to you?

Broken heart syndrome is not a term Hollywood made up, it's a real heart condition that's brought on by stressful situations, like a heart-wrenching breakup or the death of a loved one. Cardiologist, Dr. Suzanne Steinbaum explains the rare condition that’s often misdiagnosed as a heart attack.

Can you die of a broken heart?

Broken heart syndrome is not a term Hollywood made up, it's a real heart condition that's often brought on by stressful situations, like a heart-wrenching breakup or the death of a loved one.

The syndrome, also known as takotsubo cardiomyopathy (TTC), was first reported in 1990 in Japan. Since then, more cases have been reported around the world, but research suggests TTC was diagnosed in about 0.02 percent of all hospitalizations in the United States, although it may be underdiagnosed due to a lack of awareness.

SEX NOT LIKELY TO TRIGGER A HEART ATTACK, STUDY SAYS

Broken heart syndrome is a weakening of the left ventricle, the heart's main pumping chamber, usually as the result of severe emotional or physical stress.

"When you see this disease, takotsubo cardiomyopathy or the broken heart syndrome, there's an exorbitant amount of stress and all of those stress hormones you feel in your head get released into your body and it almost causes your heart to be stunned, these hormones in this stunned moment look like a heart attack,” Dr. Suzanne Steinbaum, a cardiologist, told Fox News.

The temporary cardiac condition is often misdiagnosed as a heart attack because symptoms are very similar. Doctors will use imaging studies and other measures to rule out a heart attack.

Heart attacks are generally caused by a complete or partial blockage of an artery. In broken heart syndrome, the arteries are not blocked, but blood flow in the passageways of the heart can be reduced.

Symptoms of broken heart syndrome tend to begin minutes to hours after experiencing a severe, and usually unexpected, stress.

"The first thing that happens is shortness of breath, chest pain, palpitations, very similar to a heart attack,” Steinbaum said. “The key is get to the hospital immediately because what happens in that first period of time is critical for recovery.”

Research suggests older women are more vulnerable because of reduced levels of estrogen after menopause.

According to a 2010 clinical review, more than 90 percent of reported cases were in women ages 58 to 75.

“When we’re post-menopausal we don’t have all the protective mechanisms we have when were younger to really protect our heart,” Steinbaum explained.

Although there are no treatments to completely prevent broken heart syndrome, learning how to manage stress, relax and cope with problems can improve your emotional and physical health.

“There was a scientific statement recently released about the use of meditation to prevent risk factors and that’s one of the things I talk about is being so important for people to consider as a mechanism to deal with stress,” said Steinbaum, who also serves as a national Go Red For Women volunteer for the American Heart Association.

“If you do something every day, that becomes a practice, then in that moment of time when you cannot even believe that you have to deal with something you’re confronted with, you can handle it in a little better way,” she added.

While there is no standard treatment for broken heart syndrome, doctors will focus on improving blood flow to the heart and may recommend additional therapies like β-blockers medications and lifestyle changes.

“Over time, we often recover from 'brokenheartedness,' the heart heals and we see resolution often by three months,” Steinbaum said. “It’s just getting people through that initial phase of a stunned heart.”