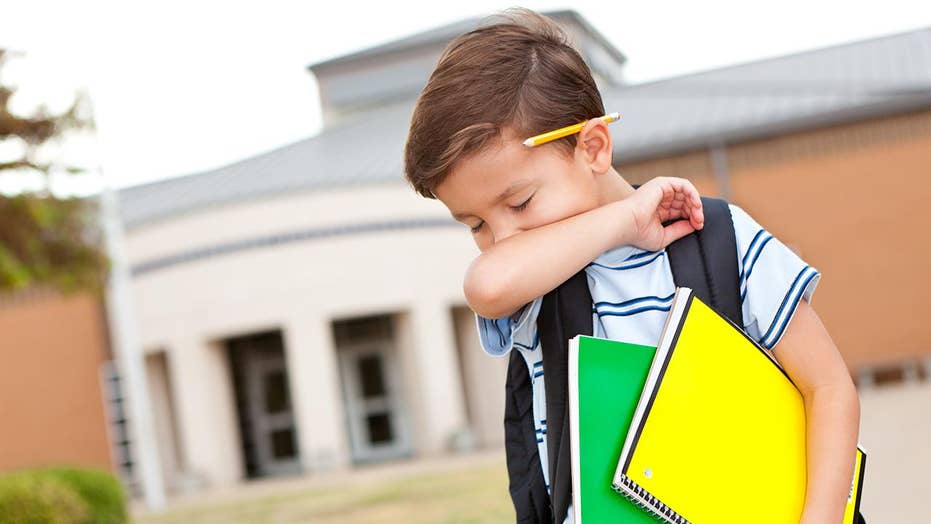 Most kids around the U.S. are back in school and that means reading, writing—and germs. Fox News’ Dr. Manny Alvarez sits down with New York City pediatrician Dr. Dyan Hes to break down the most common illnesses that happen at school and how you can try to prevent them.

Schools are breeding grounds for germs and infections, which means back-to-school time often comes with a whole slew of colds and illnesses.

Fox News’ Dr. Manny Alvarez sat down with New York City pediatrician Dr. Dyan Hes to break down the most common illnesses that happen at school and how you can try to prevent them.

“They’re not more susceptible if they’ve been in school already,” Dr. Hes told Fox News, “But for little kids who were raised at home and then go to daycare or school for the first time, they haven’t been as exposed to all those germs yet.”

In a study published in the journal Pediatrics, researchers found being in day care as an infant increased a child’s risk of having acute gastroenteritis (also known as the stomach bug) in the first year of life, but it also had a protective effect till age 6.  In the study, the children who were in day care by the age of 1 had more gastroenteritis earlier, but the non-day care children got sick more often as they got older.

Here are the most common illnesses parents will see during the school year:

According to Johns Hopkins Medicine, most children will have at least 6 to 8 colds a year.

Many parents struggle with distinguishing whether or not their child has a common cold or the flu, both are respiratory illnesses that come with similar symptoms but cold symptoms are usually milder.

The flu is typically accompanied with headaches, vomiting, and a very high fever, Hes added.

“But we can test for flu in the office, it’s a rapid test.”

According to the CDC, symptoms of a cold usually come on gradually, whereas flu symptoms develop abruptly.

Flu cases begin to rise in November, December all the way through March Hes said. Most pediatrician offices receive their flu vaccines in the last week of August and Hes recommends every child over the age of 6 months get vaccinated.

While there is no direct way to prevent your kids from catching a cold or the flu, good handwashing, a change of clothes after school are two good ways to start with Hes said.

Viral infections or bacteria are usually the cause of gastroenteritis, also known as the stomach flu or stomach bug. The most common symptoms include watery diarrhea, abdominal cramps, nausea or vomiting, and sometimes fever, according to the Mayo Clinic.

Most cases of gastroenteritis develop through contact with an infected person or by ingesting contaminated food or water.

“It’s usually fecal-oral, they (kids) wipe their butt and then touch toys or a food handler at school has it and touches something,” Hes said.

There is no cure that will instantly treat the stomach bug but there are preventive measures your kids can take.

“Good handwashing and hand sanitizer is important and if your kid is sick, keeping them home is the biggest thing,” Hes said. “A lot of people don’t have backup day care or a backup babysitter and they’re like ‘Oh my kid had diarrhea, I gave them Imodium and sent them to school, and I said ‘That doesn’t mean that your kid isn’t contagious’, you really have to keep them home for 24-hours.”

To help your little ones get over their symptoms faster, Hes recommends giving them probiotics to improve their gut flora and to try the BRAT diet (banana, rice, applesauce, and toast).

“Medical studies show it [BRAT diet] doesn’t improve or shorten the time of gastroenteritis, it just helps them feel better at the time,” Hes said.

Although strep throat can affect adults, it’s most common in children. The bacterial infection can make your throat feel sore and scratchy.

“Usually with strep throat people think they have a cough and its usually not,” Hes said. “It’s a bad stomach ache, very bad throat pain and a headache, there might not even be a cough.”

Strep is highly contagious and spreads through respiratory droplets when someone with the infection coughs or sneezes, or shares food or drinks with others. Kids can also pick up the bacteria from surfaces like toys after they touch their nose, mouth or eyes.

Doctors can test for strep in the office and often treat the condition with an oral antibiotic that can reduce the duration and severity of symptoms, and the risk of complications.

Prevention tips include proper hand washing, and cleaning of toys and other surfaces in schools and playgrounds.

Conjunctivitis, or more commonly known as pink eye, is an inflammation of the conjunctiva, the thin clear tissue that lies over the white part of the eye and lines the inside of the eyelid, according to the Mayo Clinic. It’s usually caused by a bacterial or viral infection, and in some cases an allergic reaction.

“Pink eye is a big one. It occurs all year and is super contagious,” Hes said. “It’s very hard for a general pediatrician or nurse practitioner to diagnose between viral versus bacteria, but most schools will not let you back in unless you get antibiotic eye drops.”

Typical signs of pink eye include redness in one or both eyes, purulent, green, mucous discharge from your eyes and itchiness in your eyes.

“If it’s clear, watery and runny, then the child has a cold and it has to run its course, but if your eye is bright pink you’ve got to start the eye drops and you also have to be home for 24-hours before you go back to school,” Hes said. “It’s also very important for the parents to separate the towels [in the house], and when they wipe the eye, wipe it with a paper towel or cotton ball and throw it into the garbage so you don’t contaminate the whole family.”

Mononucleosis, mono or the “kissing disease” is a viral infection transmitted through saliva. You can get it through kissing, exposure to infected respiratory air droplets or by sharing utensils with someone who has mono.

“We see mono in kids as young as 4 or 5 years old,” Hes said. “What’s different about mono is that it’s a prolonged illness.”

Hes said some symptoms like the fever can last for more than 2 weeks.

Your child can also show signs of severe fatigue, throat pain, pus around their tonsils, sore muscles and a loss of appetite.

There is no real prevention for mono except for good hygiene, handwashing and respiratory guidelines, Hes said.

According to Hes, Mono can last anywhere from 4 to 8 weeks.

“It runs its course but we usually say no contact sports for 6 weeks after mono because your spleen can get enlarged,” Hes said.