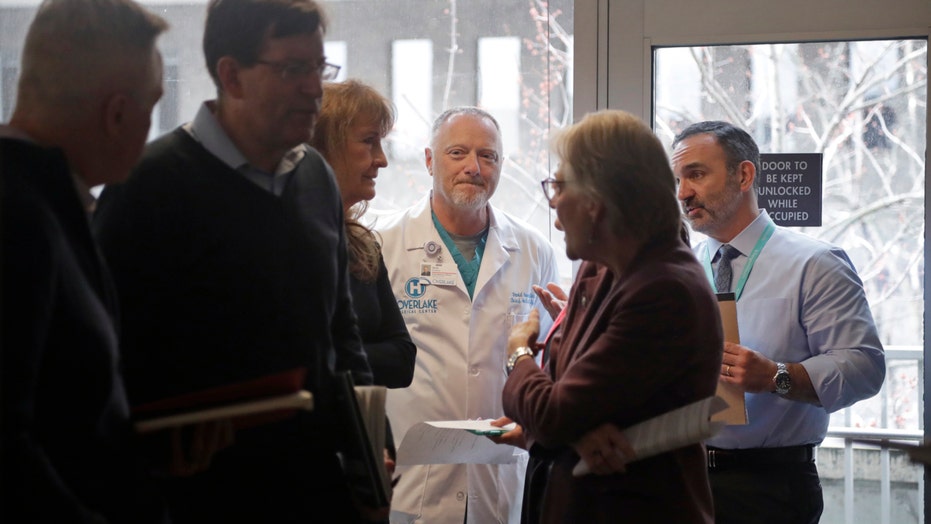 A second coronavirus death has been confirmed in Washington state, officials said Sunday.

An adviser to Iran's Supreme Leader Ayatollah Ali Khamenei has died from the new coronavirus, as other top officials in the country are confirmed to be infected, according to multiple reports on Monday.

The Iranian Health Ministry recorded 523 new cases in the past 24 hours, bringing the country's known total to 1,501. They mark a 53 percent increase since the day before.

Mohammad Mirmohammadi, 71, was an Expediency Council member who advised Khamenei and settled disputes between him and parliament. COVID-19 has already infected Iran's vice president and deputy health minister.

His death comes after the government on Monday rejected help from Secretary of State Mike Pompeo, who announced last week the U.S. was concerned Iran may have covered up details on the spread of the virus.

Pedestrians wearing face masks walk on the sidewalks in northern Tehran, Iran, Sunday, March 1, 2020. While the new coronavirus has extended its reach across the world, geographic clusters of infections were emerging, with Iran, Italy and South Korea seeing rising cases. (AP Photo/Vahid Salemi)

"We neither count on such help nor are we ready to accept verbal help," Foreign Ministry spokesman Abbas Mousavi said during a briefing on Monday. He added the country has always been "suspicious" over American intentions, and that the U.S. government was trying to weaken Iranians' spirits over the outbreak.

Iran's mortality rate from the virus is roughly 5.5 percent, compared to an overall fatality rate of about 2 percent in China. The difference in rates has led people to suggest the number of infections in Iran is higher than what the country has officially reported. The country's first case was reported less than two weeks ago.

The virus has killed at least 66 people in Iran, the highest death toll outside of China. The majority of 1,150 cases throughout the Middle East are linked back to the country.

Iran was preparing the possibility of testing "tens of thousands" of people following a spike of cases on Saturday.

The country has closed schools and universities due to COVID-19, but religious Shiite shrines have remained open. Last week, Iranians were captured licking some of the shrines in defiance of the coronavirus.

Most countries in the Middle East have limited or ceased travel to the country. It has the 4th highest infected total outside of China, South Korea, and Italy.

Both patients are being closely monitored, the department said.

"Depending on the global evolving scenario, travel restrictions could be imposed as a precautionary measure," said Dr. Harsh Vardhan, Union Minister of Health and Family Welfare.

Intelligence agencies had concerns over India's lack of countermeasures to the virus and said its dense population could fuel a widespread outbreak, according to Reuters.