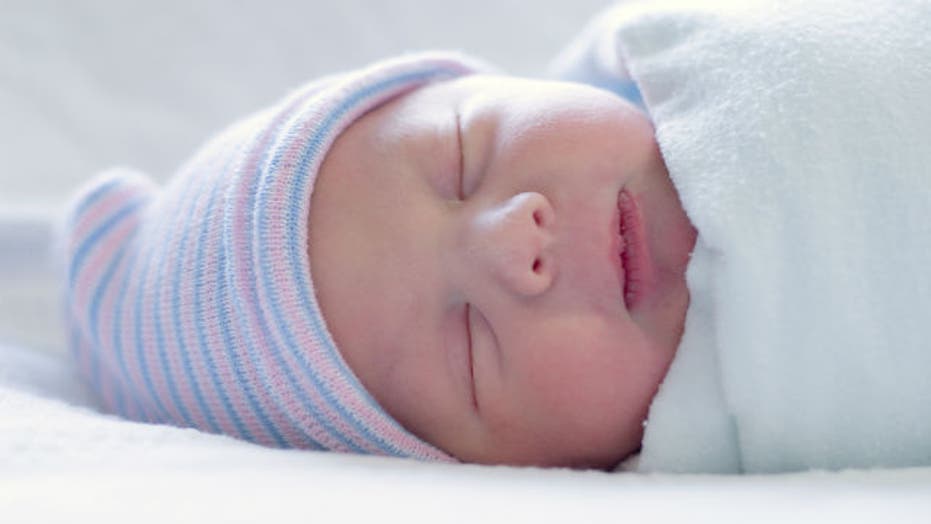 How to get your newborn to sleep through the night

It’s common for newborns to keep their parents up at all hours of the night. But New York pediatricians and co-authors of “The Newborn Sleep Book,” Drs. Lewis and Jonathan Jassey introduce a new method for training newborns to sleep through the night

Bringing home your newborn from the hospital is one of the most joyous moments in a parent’s life. But those joyous moments can quickly turn into chaotic and stress-ridden times if your baby can’t sleep through the night.

“When we first brought Peyton home from the hospital he would wake up every two to 2 ½ hours, and we would have to feed him two to three times during the night,” Alyssa Russomondo told FoxNews.com.

New parents Alyssa and Michael Russomondo, of Massapequa, struggled to find a way to get their baby boy to sleep better at night. After a week of sleepless nights, the young couple sought the help of their pediatricians, Drs. Lewis Jassey and Jonathan Jassey.

“When [Alyssa and Michael] came in they were desperate. They were sleeping maybe three to four hours at night,” Lewis told FoxNews.com. “I said, ‘I’m going to get you through this and by next week at this time or within two weeks you’re going to be sleeping seven-plus hours.’”

To train newborns to sleep through the night, the Jassey brothers created a method that eliminates middle-of-the-night feeding by stretching out meal times to occur at four-hour intervals during the day.

The theory behind their method is to train a baby’s hunger receptors to acclimate to a specific schedule. As long as a baby gets fed the appropriate amount of food needed for healthy weight gain and development, they will not become hungry at inconvenient times— like 2 a.m.

If your baby is in the habit of going fewer than four hours between feedings, the doctors recommend extending each feeding time by fifteen minutes each day. That way you can gradually increase the in-between times.

“The most challenging part was stretching out the feedings,” Alyssa, 31, said. “When we were trying to get it to four hours we would try taking him for a walk in the stroller to calm him down and just distract him for a little bit.”

In order for the Jassey brothers’ method to work, parents also need to learn that a bottle isn't always the answer for a crying baby.

“Just because they’re crying doesn’t mean it’s a bad thing, and it doesn’t necessarily mean that they are hungry--- it’s their effective way to communicate with us,” Dr. Jonathan told FoxNews.com. “We don’t want them to realize that every time they’re crying they need to have a bottle or a breast shoved into their own mouth. Their stomach can get used to being fed so frequently and start to expect that.”

The 20-year tested method, boasts an over 90 percent success rate. After two weeks on the doctor’s program, baby Peyton was sleeping seven to eight hours a night.

“The first time he slept through the night, I just remember waking up on my own and going into his nursery to find him still asleep. It was a really weird feeling actually, like I had slept through something and why wasn’t he up yet?” Alyssa said.

The doctor’s say the most important component to their method is staying consistent.

“Stay patient; it’s going to work and eventually their brain will follow their actual stomach,” Jonathan said.  “A baby is a creature as far as habit [goes], so the earlier that we can get started on a good routine, the better for everybody.”

Thanks to the Jassey brothers, the Russomondo family can now sleep safe, sound and through the night.

“It's given us quality of life where we’re able to really take the time and enjoy Peyton and at the same time we’re all getting a great night's sleep,” Michael, 32, told FoxNews.com.