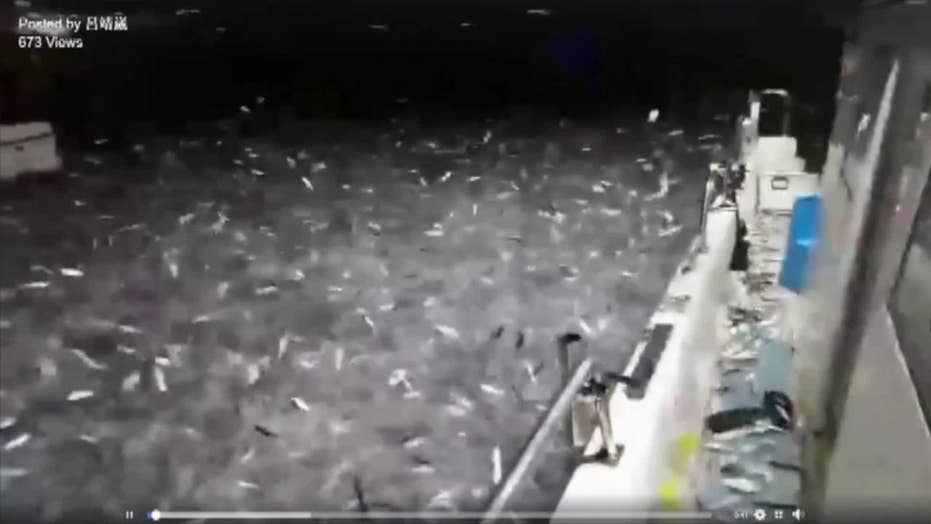 Must watch: Thousands of sardines jump on fishing boat

Tens of thousands of sardines were seen jumping onto a fisherman’s boat in Taiwan, reportedly to escape being eaten by several large fish in the area.

Tens of thousands of sardines were caught on camera jumping onto a fisherman’s boat in Taiwan to escape several larger fish last Friday.

Fisherman Lu Jingwai described the incredible scene to Daily Mail, saying the thousands of jumping fish looked like the sea was “boiling water.”

More than 10,000 of the small fish were recorded flopping out of the water – and some of them managed to hop into the boat – at Bisha fishing port in Keelung, Taipei City, Daily Mail reported.

Jingwai told the publication he thinks the fish were escaping barracudas.

“I've seen three to five barracudas over 3.3 ft long swimming under my boat two days ago. I guess it is their hunting season these few days,” said Jingwai to Daily Mail.

According to SETN.com, barracudas have been sighted near the fishing port where Jingwai was.

Some who viewed Jingwai’s video on Facebook felt the fisherman was lucky the bigger fish were there.

Nick Chang commented, “The best time to catch (sardines) is when they are being chased by big fish.”