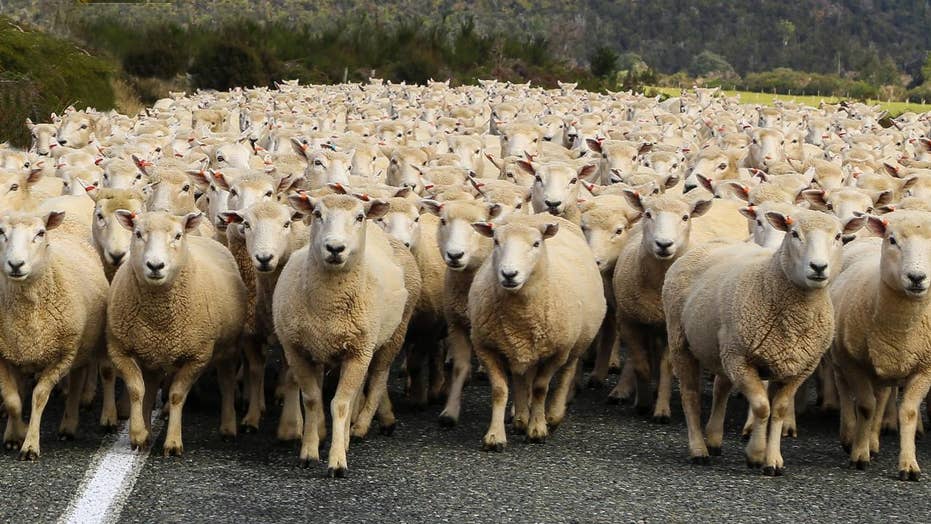 Watch: Family left their gate open on the green belt and the grazing sheep took over.

This might be the most adorable case of trespassing ever caught on camera.

The town of Lincoln, Calif., uses thousands of sheep and goats to prepare for the fire season by cutting down the vegetation. Scott Russo thought it would be a good idea to try and give his daughters a close-up look at the animals. Unfortunately, when he opened his gate, the herd flocked into his yard, turning it into a sea of wooly-white intruders.

At first, Russo’s wife seemed amused by the situation, but her tone changed as more and more of the sheep continued to pour into the yard. With only one small entrance, removing the phalanx appeared to be an impossible task. Russo attempted to scare them out of the yard, but they simply refused to leave (or couldn’t figure out where the exit was).

The town of Lincoln, Calif., uses thousands of sheep and goats to prepare for the fire season by cutting down the vegetation.<br> (Scott and Erin Russo)

Russo resorted to physically lead them out of the gate, while his wife stood behind the herd, shaking a tambourine. Apparently, the sheep weren’t fans of the percussion instrument, as the animals, now clearly upset, slowly poured out of the tiny exit. For whatever reason, getting on the family trampoline and jumping up and down caused the sheep to leave even faster.

Once the last intruder left, Russo quickly closed his gate. But unfortunately, the animals reportedly left a pretty strong odor behind. The lesson? Sheep may look cute, but folks may not want them in their yards — unless they can’t sleep, and need to try counting a few.