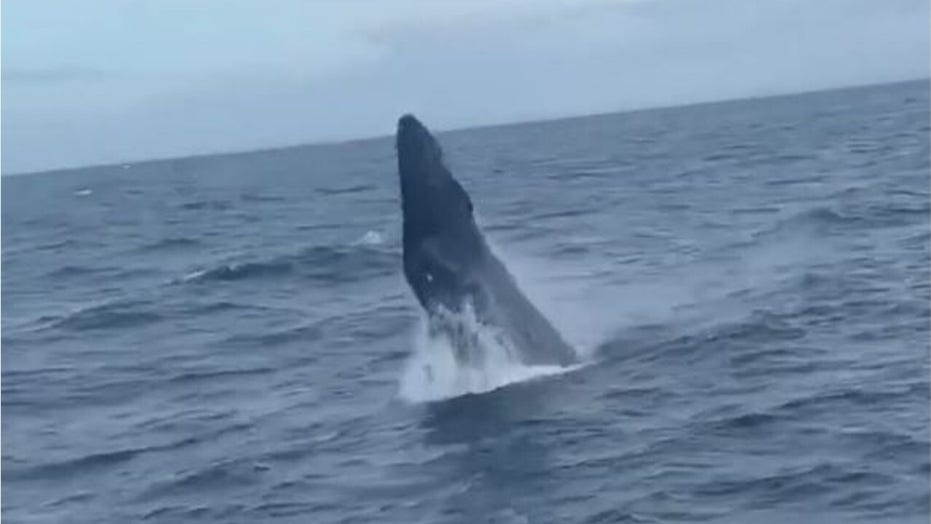 WATCH: Chris Clarke was fishing off the coast of Lyme Regis in England when a humpback whale breached the water just several feet from his boat.

It would probably take more than regular fishing tackle to reel this animal in.

A fisherman captured a stunning image when he filmed a humpback whale breaching only several feet away from his boat. Apparently, at least two other whales were spotted in the area around the same time.

Chris Clarke was fishing off the coast of Lyme Regis in England when the encounter occurred, South West News Service (SWNS) reports. (SWNS)

Chris Clarke was fishing off the coast of Lyme Regis in England when the encounter occurred, South West News Service (SWNS) reported. He had reportedly set out on Friday, July 24, but didn’t see the whale until Sunday evening.

“We'd been up all night working and we saw them going past,” he told SWNS. “It certainly woke us up a bit. Two of them were a way off, but one swam right past us, and leaped out the water.”

Fortunately, the moment was caught on camera.

Clarke continued, “I've seen lots of dolphins and seals, but I've never seen a whale before. I never thought I was desperate to see a whale but I'm really glad that I have.”

Some encounters in the water, however, can be a bit scarier.

Brothers Lee and Adam Ferguson were recently out fishing in Western Australia for snapper earlier this month, when they encountered a giant great white shark that had swum up to their 17-foot fishing vessel.

However, the Fergusons did not seem particularly concerned – Lee claimed the pair “didn’t feel in immediate danger” as the shark circled. Instead, one of them pulled out a GoPro and began filming. The camera, which was reportedly connected to a short pole, was submerged into the water to get a close-up view of the shark.