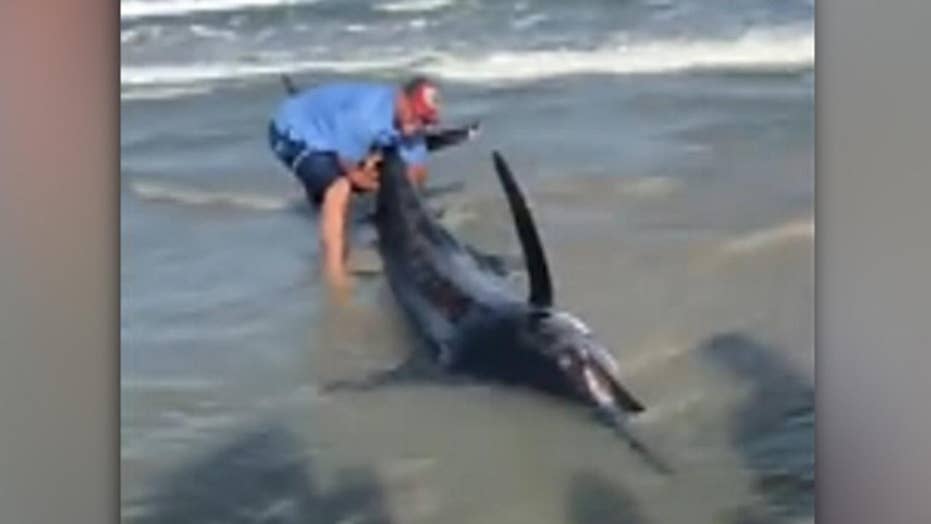 Raw video: Visitors to beach in Port Aransas, Texas attempt to pull massive blue marlin back into water after finding it ashore.

A construction crew hoping to catch some fish during a team building outing Saturday off the coast of Kauai, Hawaii, reeled in an unforgettable sea creature — a record-breaking, 1,073-pound blue marlin.

It was a quiet day for the group as they waited for fish to bite a few miles from Nawiliwili Harbor. But after several hours passed, they felt something strong take the bait.

They struggled for an hour and a half with the large fish, according to the Honolulu Star-Advertiser. Together, they worked to haul the fish closer to their 50-foot boat. The fish briefly escaped — "at one point going airborne," the newspaper described — but eventually they were able to bring the more than 1,000-pound blue marlin on deck.

"The Kauai Region crew set sail on a team building event and never thought they would end up reeling in a blue marlin weighing in at 1,073 lbs, now known as the 'Yamasaki Grander' named after boat captain Steven Yamasaki," Goodfellow Bros., Inc., the company that organized the group activity, posted on Twitter Thursday. "It was a team effort they will never forget!"

Tristan Gonzales, who helped with the monster catch, said it was the biggest fish he'd ever seen in person.

“It looked like a sea monster!" Gonzales told Hawaii News Now. “I was just hoping the hook sank to give us a fighting chance to land this fish.”

Fortunately, they did — and they were able to bring it back to shore, too. The group watched as the fished got weighed and posed for pictures with it on the dock.

“This is one fishing trip that will live on in the record books and more so, in the memories of the crew,” Goodfellow Bros. told the Honolulu Star-Advertiser in a statement. “No fishing tales here…only the real thing…the unbelievable catch that did not get away! The Yamasaki Grander!”

It's the second-largest blue marlin ever caught in Kauai behind a 1,148-pounder caught in Port Allen in November 1998, according to Hawaii Fishing News.

"The largest blue marlin ever caught on a rod and reel was caught by Capt. Cornelius Choy and his daughter Gail on the COREENE-C in 1971. The fish weighed an astonishing 1,805 lbs," the fishing site states on its website.

Blue marlins can grow up to 12 feet long and weigh up to 2,000 pounds, according to the National Oceanic and Atmospheric Administration (NOAA). Females, which are typically the larger gender, can live up to 20 years — 10 years longer than males.