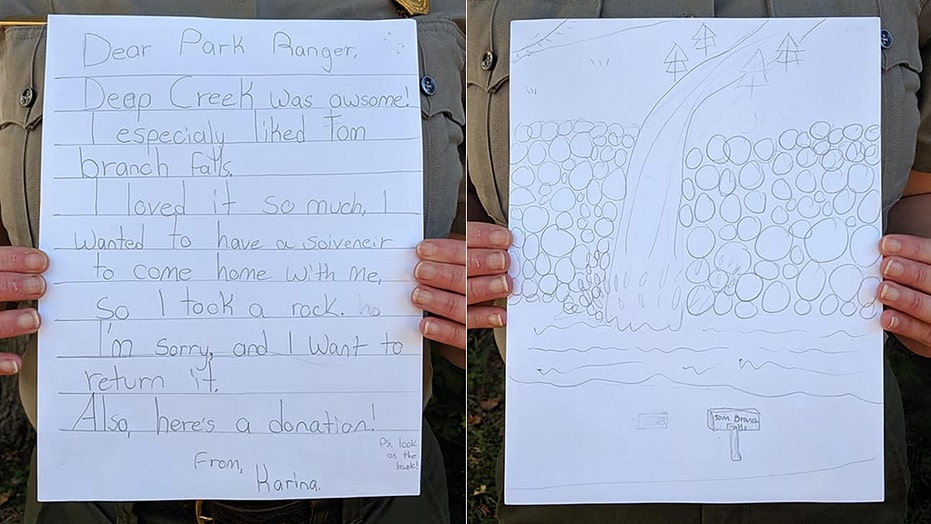 One young lady is being praised for her impeccable manners for an apology note she wrote to the National Parks Service (NPS) rangers of the Great Smoky Mountains National Park, after she reportedly took a rock home as a souvenir. In expressing her remorse, the girl also returned the stolen rock token to the park and even gave a donation.

On Aug. 17, the NPS shared the tale of the adorable note to their Facebook page, where it has since been liked over 5,200 times, and shared more than 700.

"Dear Park Ranger, Deep Creek was awesome! I especially liked Tom Branch Falls," the youngster, named Karina, began her letter. “I loved it so much, I wanted to have a souvenir to come home with me.”

The heartfelt letter concluded with a postscript to "also look on the back" — where the girl drew a picture of the Tom Branch Falls, a waterfall in the expansive park near Swain County, N.C.

Lucky for Karina, the park rangers were tickled by her sincere apologies for the petty theft, and even wrote back.

“Dear Karina, Thank you so much for returning the rock! It has made its way back to Tom Branch Falls. We are so glad you enjoyed your visit,” the park officials wrote in their Facebook post.

“Already, you are becoming an amazing steward for the park. Thank you for recognizing that what is in the park should stay in the park. If every visitor took a rock home, that would mean 11 million rocks would be gone from the park every year!” they shared.

The park rangers went on to explain the importance of rocks in the Great Smoky Mountains as homes for “hundreds” of creatures, including salamanders.

“Now that you know to leave nature the way you find it, we hope you will help share this message with others,” the officials concluded. “It is always a good thing to give another the chance to discover!”

The cute letter evidently hit all the right notes with Facebook commenters, who agreed that Karina had the chops to be a "future park ranger,” and praised her parents for the valuable lesson the exercise taught their girl.

In expressing her remorse, the girl named Karina returned the stolen token to the park and even gave a donation. (National Park Service)

“So refreshing to see there are still parents teaching their children values! So sweet!” one user wrote.

“These are awesome parents to teach their children the importance of this and you all are wonderful for taking the time to write her back,” another agreed.

“Thank you, Karina, for being a good citizen and steward of our Earth,” one said. “There are millions of grownups who could take a lesson from you and become better stewards!”