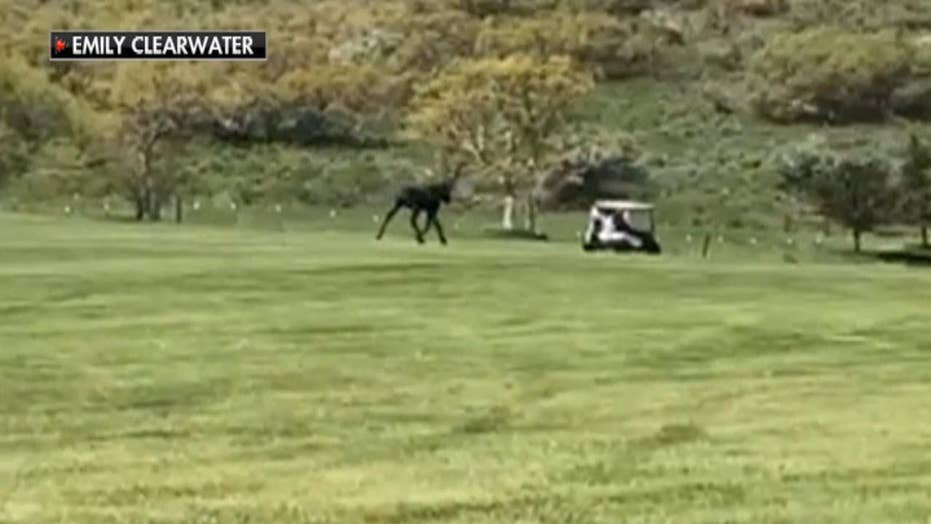 A 'gigantic' moose on the loose in Utah gave a pair of Memorial Day golfers a serious scare in a clip that has since gone viral on Facebook.

A “gigantic” moose on the loose in Utah gave a pair of Memorial Day golfers a serious scare in a clip that has since gone viral on Facebook.

Mark Redican and his wife were enjoying a round at Park City Golf Club when a staffer informed the couple that the massive mammal was in the area, Fox 19 reported.

“She said, "Hey, just to give you a heads up, there's a moose here so just keep your eye out,'” Redican recalled.

Moments later, her words of caution came to fruition and the wild creature was running their way.

“I’m getting ready to hit my shot and all of the sudden [my wife's]like, “Oh my God, Red, here comes the moose,'” the golfer said.

Across the fairway, a moose taller than their golf cart was bounding at them.

“This moose is just lumbering at us, it's coming in hot, so we jump in the golf cart and drive away,” Redican recounted. “It was kind of scary when he's coming that fast at you.”

Describing the creature “gigantic” but not “super aggressive,” they decided to keep moving, the Associated Press noted.

Witness Emily Clearwater of Phoenix caught the scene on her smartphone when she realized the moose was headed for the couple. The 46-second clip has since been viewed over 28,000 times through the Utah Division of Wildlife Resources’ Facebook page.

Though the moose was hot on their heels, Redican says “luckily it kind of lost interest toward the end,” as evidenced in the clip. Little did he realize, the curious creature was not yet gone for good.

After trotting off into the trees, the moose returned to the couple’s area a few minutes later.

“After we teed off at the next hole, he made his way down to the golf course and came at us again,” Redican divulged of the unexpected encounter, which didn’t deter his round too badly.

“Well, I had a pretty good round going so I had to finish the hole. I was right in the middle of the fairway, I actually ended up parring the hole."

The Salt Lake City man admitted that the loose moose moment was frightening, but says he is happy he now has a great story to tell.

Last year, a video of loose moose also went viral as it galloped down a ski slope alongside snowboarders in Colorado.