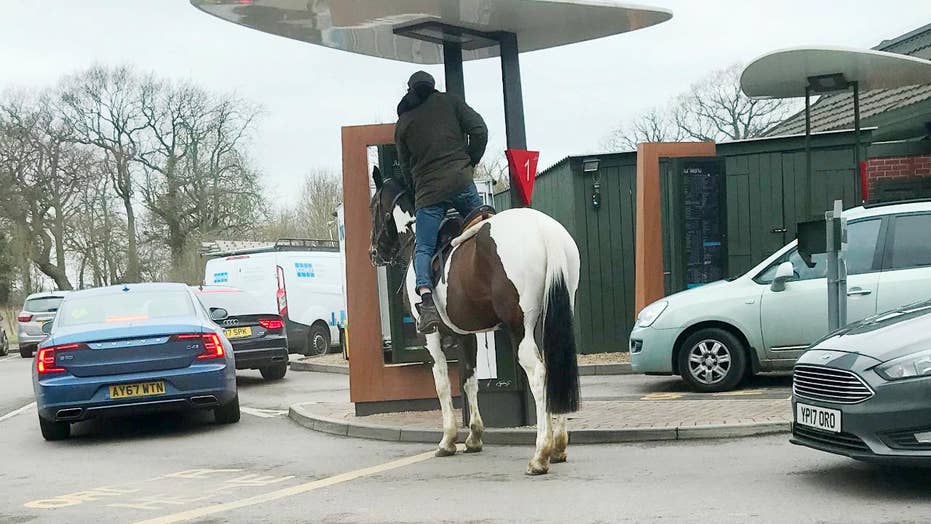 Man denied McDonald’s for horsing around?

A man in the UK was apparently denied McDonald’s drive-thru service because he swapped a car for a horse.

Unlike that one Wendy’s restaurant in Pittsburgh, McDonald’s locations in the U.K. aren’t so keen on letting horses into their drive-thru lanes.

A man in Suffolk, England, was reportedly denied service at the drive-thru of a McDonald’s after “trotting up” to the microphone with his horse on Thursday, according to the BBC.

The horseback rider, who was not identified, was photographed by fellow McDonald’s customer Jason Barrett, who told the BBC that a McDonald’s manager came outside of the restaurant to inform the man he couldn’t take his equine through the drive-thru.

"I had to do a double take. You don't see that every day,” he told the site.

According to Barrett, the man didn’t seem to mind much, and proceeded to tie up his horse while he went inside for a coffee. When he was finished, he just “trotted across the grass with his latte,” Barrett said.

As odd as this sight was, it wasn’t even the first time this week that a McDonald’s customer in the U.K. was forced to tie up his horse before ordering.

The day before in Croydon, South London, a witness photographed a horse and carriage tied up outside a McDonald’s while the owner was presumably grabbing a bite to eat inside the restaurant.

The town’s local publication, the Croydon Advertiser, notes that McDonald’s must encounter this situation quite a bit, as the McDonald’s U.K. website even has a page explaining why horses aren’t allowed in the drive-thru.

“Government road safety advice to drivers notes it is unsafe for them [horse riders] to position a horse between lines of traffic where they can panic, sandwiched with no escape route,” reads the site.

That Wendy’s in Pittsburgh, on the other hand, apparently has no such restrictions, as Marcella Gruchalak found out in mid-February. 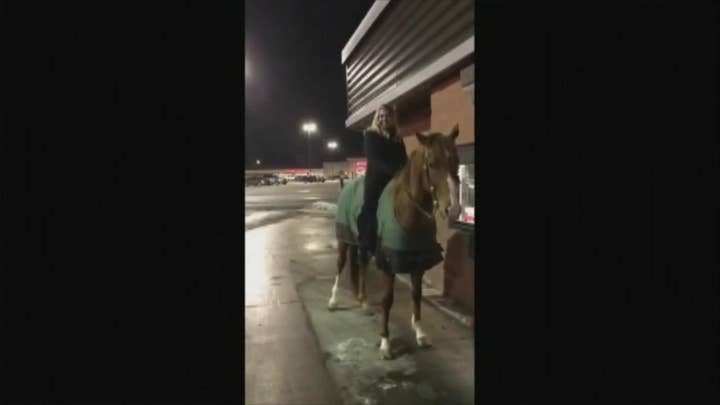 Gruchalak and her friend Shelly had just left a fundraiser in Fox Chapel, Penn., when they decided to stop by Wendy’s to grab a treat for her horse Buns — and they successfully trotted away after ordering a Frosty for the horse.

“I thought it would be extra humorous to take him through Wendy's because he’s a redhead just like Wendy,” Gruchalak later wrote on Facebook.