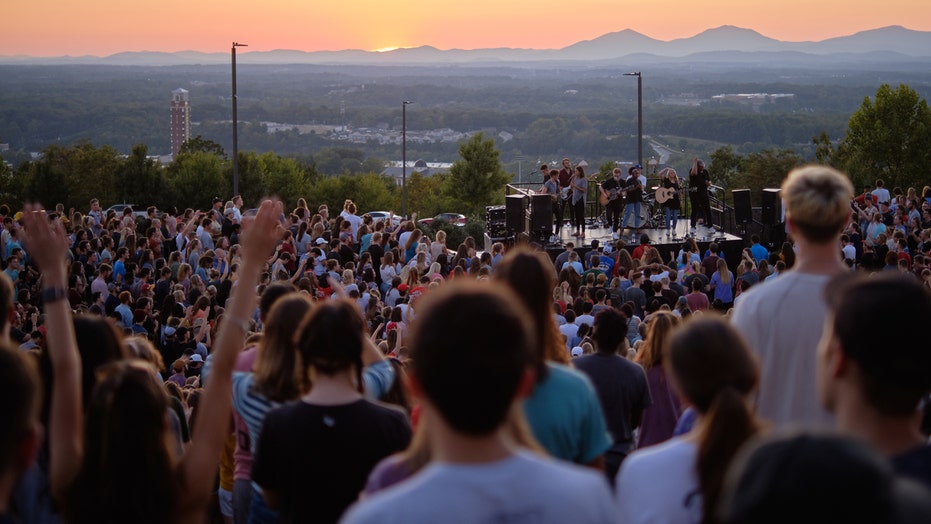 Thousands of Liberty University students showed up to a spontaneous worship service held at sunset in what one official called "the essence of Liberty U."

David Nasser, the senior vice president of the Office of Spiritual Development, told Fox News that his wife, Jennifer, was having her quiet time one morning when she felt like students needed an impromptu opportunity to come together for worship and prayer. So he put out an invite on Twitter the night before.

"It's going to be an amazing time...with a stunning sunset as our backdrop," Nasser wrote, expecting just a few hundred students to show.

The team was shocked when word spread and a large portion of the campus showed up.

"It was humbling to see over 4,000 students gather to make much of God," Nasser said. "This is the essence of Liberty U. Godly students dedicated to living their lives as worship."

Hours before the service, Nasser had to break the news that the service would not be streamed but, after a parent asked how they could intercede for the service, he posted the setlist and an explanation on Instagram:

"For several years now, we have been asking the Lord for an awakening on our campus," Nasser said. "We have seen the Lord do amazing things, so many salvations, intentional disciple-making through our community groups, a culture of honor being cultivated, less religion, more spirituality, record-breaking attendance in campus communities, generational curses being broken, missional travel to every corner of the world, more service hours given than ever, the launch of our new 24/7 prayer network and so much more...."

But added: "YET! Although we are grateful to the Lord for what He is doing in & through us, we are hungry for more of Him and recognize these are just the murmurs....That we could be on the verge of REVIVAL!"

At the conclusion of the sunset worship service, students walked "like a mountain stream flowing down...meditating, praying, and singing...back to campus," as Nasser later stated.

Senior student Ian Parish posted several videos on Twitter, telling Fox News it was awesome to see "the student body is still unified under Christ," especially after the campus has been in the headlines in recent days.

Parish co-organized a protest aimed at investigating claims of misconduct from LU President Jerry Falwell, Jr., something the university says the media, including Politico, Reuters and The Washington Post all refused to print, showing an "unbalanced public narrative in place."