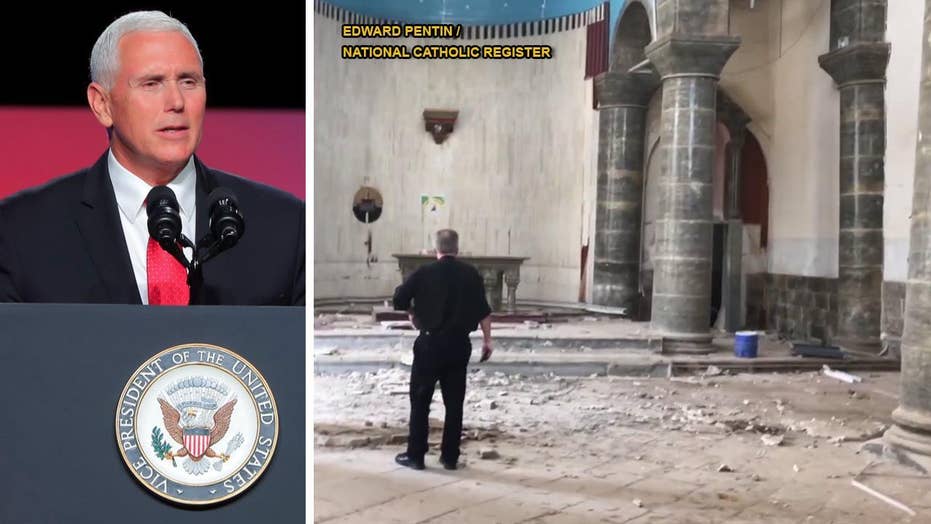 Dressed in a white burqa from head to toe, not even her eyes were visible. She was introduced only as Hannah, a Christian, hiding her identity for fear of her life.

Hannah spoke to members of the media in Washington, D.C. Wednesday, to explain that in the South Asia country where she's from, being Christian is at worst a death sentence – and, at best, a license for the majority religion's adherents to abuse and severely persecute her.

Hannah told the story of a young Christian girl, constantly harassed and abused in school. Her classmates taunted her, accusing her of "believing in a weak God who died."

"They pull her braids. They trash her books... and tell her she would be far better off if she converted, if she didn’t' stay a Christian,” she said. “Because what place is there for Christians in this country in South Asia?

According to the watchdog organization Open Doors USA, Christian persecution is growing globally. It's estimated that more than 245 million Christians now experience high, very high, or extreme persecution – an increase from 215 million in 2018, a 14 percent rise. At the annual release of its World Watch List for 2018, one of the trends highlighted is that women are a huge target.

"The data prove that Christian women are the most exploited group on the earth today," said David Curry, president of Open Doors.

In many places they experience a "double persecution" – one for being a woman, the other for being Christian.

Every year, Open Doors USA, a bi-partisan grassroots organization, releases a list of the top 50 countries where it is most dangerous to be a Christian. Eight of the top 10 – Afghanistan, Somalia, Libya, Pakistan, Sudan, Eritrea, Yemen, and Iran – are Muslim majority countries where radical Islam is still alive and well, particularly in Sub Saharan Africa.

For the 18th year in a row, North Korea is No. 1 on the list. It is illegal to even own a Bible there, and the, "very suggestion that you're a Christian can have you arrested," Curry said.

North Korea is an example of the rise in authoritarianism, where Curry said, "individual freedoms are being subordinated to the will of governments and dictators."

For that very reason, China has moved up on the list since last year, from No. 43 to No. 27. The Communist government under President Xi Jinping has started a campaign of closing down and/or severely controlling Christian Churches. Curry said last Dec. 10, police in Beijing raided a church and arrested its pastor for not allowing the government to control its message. The pastor insisted its doctrine be about the teachings and life of Jesus rather than government dogma. The pastor is still imprisoned.

Rounding out the top 10 is India, where the ruling Bharatiya Janata Party (BJP), under Prime Minister Narendra Modi, has introduced a radical Hindu agenda. It unabashedly seeks to rid the country of any other religion. This rise in radical nationalism has given people "impunity to attack churches."

Curry called on world governments and economic leaders to take heed of the list and scrutinize more carefully how and if they should do business with countries where religious persecution persists.

The prevailing view is that it happens in backwater places where a few rogue citizens take their frustrations out on a minority. But the watch list shows that there is an increase also in government laws restricting Christianity and other non-mainstream views.

For Hannah, there is a misconception that Christianity is a Western religion. Christianity, she noted, was born in the heart of the Middle East, where it is being pushed out by radical groups.

Even in South Asia, it is not, as she said, "a foreign export." It is where Apostle Thomas, one of Jesus' original 12 followers, brought Christianity.

Hannah's prayer is that the world will recognize that there is hope to recover that history.