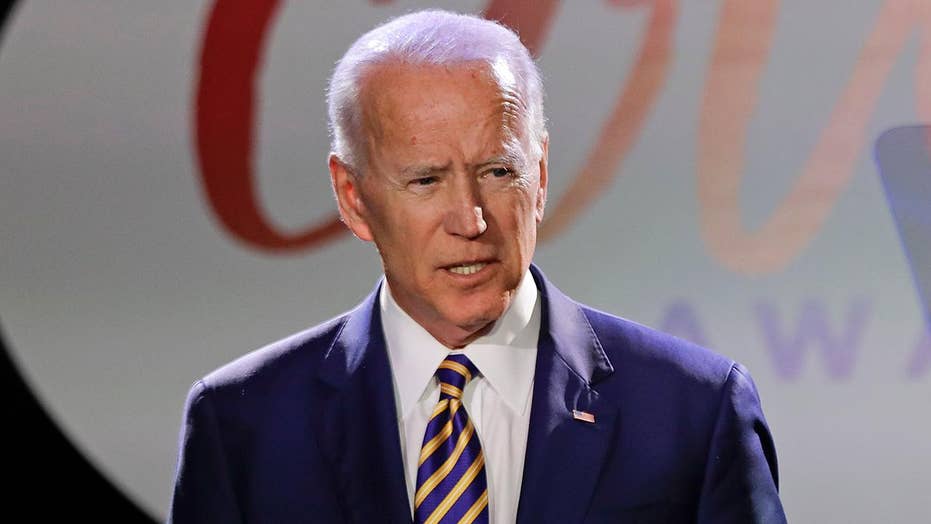 “It has been rumored that one Vice President Joe Biden maybe gunning for the Democratic nomination in 2016 but before we talk about a promotion, I think we need to take a look with how he’s doing in his current position,” Stewart said in the segment from 2015, titled: “The Audacity of Grope.”

The clip showed a news segment from CNN in which the anchors spoke about a viral video of Biden placing his hands on the shoulders of former Secretary of Defense Ash Carter’s wife, Stephanie Carter.

“Biden left his hands on Stephanie Carter’s shoulders for an estimated 28 seconds,” an anchor was heard saying.

The segment showed a few more instances of Biden getting close with relatives of members of Congress, including footage of him whispering in the ear of Sen. Chris Coons’ daughter. Stewart pretended to put sanitizer in his eyes following the footage.

Stewart pointed out that Biden is “actually very good on women’s issues in general.”

“See, in general, he’s great,” Stewart said then of the vice president. “It’s the moments with actual women he seems to have a problem with.”

Last week, former Nevada Lt. Gov. candidate Lucy Flores accused Biden of inappropriate conduct during a 2014 campaign event, saying Biden “plant[ed] a big slow kiss on the back of my head.” Since then, three more women have come forward to accuse Biden of making them feel uncomfortable at events because of his in appropriate touching.

Following the news, the photographs of Biden with Stephanie Carter made their way back into the public eye. Carter wrote a post on Medium defending Biden and saying the photos were “misleading.”

“But a still shot taken from a video — misleadingly extracted from what was a longer moment between close friends — sent out in a snarky tweet — came to be the lasting image of that day,” she wrote.

Sen. Coons also addressed the photo of his daughter with Biden over the weekend. He said his daughter “did not think of it as anything," according to The Washington Post.

Biden said Sunday he doesn’t believe he’s ever acted inappropriately. In a statement, Biden said it was never his intention to make women feel discomfort and if he did so, “I will listen respectfully.”