FILE: Stormy Daniels' lawyer tweeted early Thursday that she was arrested while performing at a Columbus strip club. (AP)

Daniels, whose real name is Stephanie Clifford, has said she had sex with Trump in 2006 when he was married, which Trump has denied. She's suing Trump and his former longtime personal lawyer and fixer Michael Cohen and seeking to invalidate a nondisclosure agreement that she signed days before the 2016 presidential election.

Columbus police did not confirm the arrest to Fox News. The strip club where she was scheduled to perform, Sirens, also did not indicate any arrest was made. 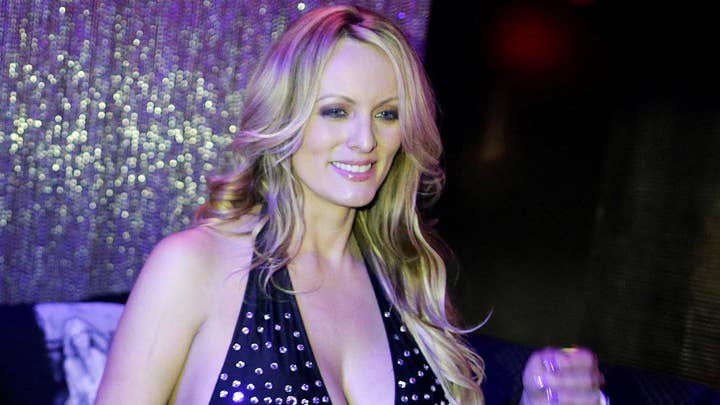 Daniels' lawyer, Michael Avenatti, wrote in a follow-up tweet that she was arrested for "allegedly allowing a customer to touch her while on stage in a non sexual manner."

An Ohio law prohibits anyone who isn’t a family member to touch a nude or semi-nude dancer.

"Are you kidding me? They are devoting law enforcement resources to sting operations for this? There has to be higher priorities," he wrote.“This was a setup & politically motivated,” he said. “It reeks of desperation. We will fight all bogus charges.”

Despite being on the books for more than a decade, the Dispatch reported in September of 2017 that the law is seldom used. A spokesman from the Franklin County Sherriff’s office in Columbus told the paper that they had no recorded instances of it ever being cited.

Avenatti, who confirmed to Fox News that he sent out the tweets, said she will likely be charged with a misdemeanor and be released on bail.