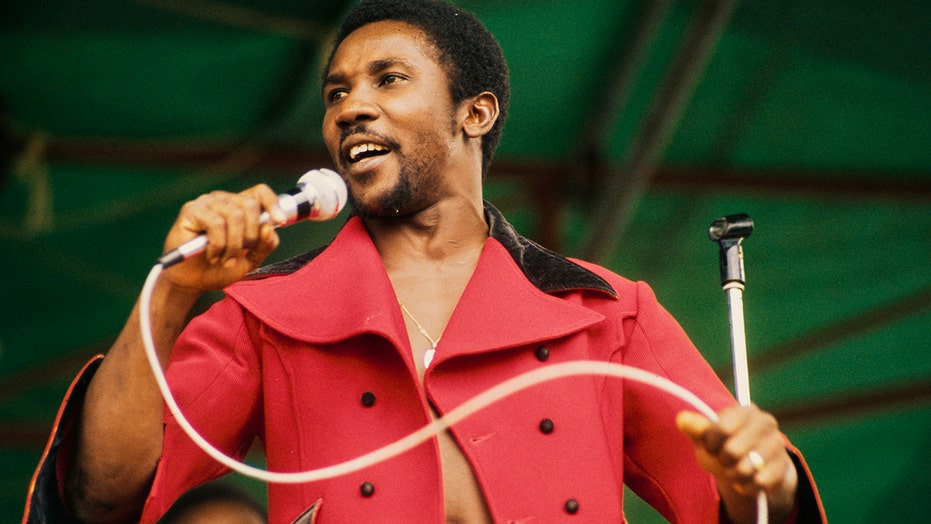 Toots Hibbert, one of reggae's founders and most beloved stars with classics such as “Pressure Drop,” “Monkey Man” and "Funky Kingston," has died. He was 77.

Hibbert, frontman of Toots & the Maytals, had been in a medically-induced coma at a hospital in Kingston since earlier this month. He was admitted to intensive care after complaints of having breathing difficulties, according to his publicist. It was revealed in local media that the singer was awaiting results from a COVID-19 test after showing symptoms.

News of the five-time Grammy nominee’s ill health came just weeks after his last known performance, on a national live-stream during Jamaica’s Emancipation and Independence celebrations in August.

A family statement said Hibbert died Friday at University Hospital of the West Indies in Kingston, Jamaica, surrounded by family.

Ziggy Marley, son of Bob Marley, tweeted about the death saying he spoke with Hibbert a few weeks ago and, “told him how much i loved him we laughed & shared our mutual respect,” adding, “He was a father figure to me.”

A muscular ex-boxer, Hibbert was a bandleader, songwriter, multi-instrumentalist and showman whose concerts sometimes ended with dozens of audience members dancing with him on stage. He was also, in the opinion of many, reggae's greatest singer, so deeply spiritual he could transform “Do re mi fa so la ti do" into a hymn. His raspy tenor, uncommonly warm and rough, was likened to the voice of Otis Redding and made him more accessible to American listeners than many reggae artists. Original songs such as “Funky Kingston” and “54-46 That's My Number” had the emotion and call and response arrangements known to soul and gospel fans. Hibbert even recorded an album of American hits, “Toots In Memphis,” which came out in 1988.

Toots Hibbert of Toots and the Maytals performs on stage during day one of Formula 1 Singapore Grand Prix at Marina Bay Street Circuit on September 20, 2019 in Singapore. (Suhaimi Abdullah/Getty Images)

Never as immersed in politics as his friend and great contemporary Bob Marley, Hibbert did invoke heavenly justice in “Pressure Drop,” preach peace in “Revolution,” righteousness in “Bam Bam” and scorn his 1960s drug arrest and imprisonment in “54-46 That’s My Number.” He also captured, like few others, everyday life in Jamaica in the years following its independence from Britain in 1962, whether telling of wedding jitters ("Sweet and Dandy") or of trying to pay the rent ("Time Tough"). One of his most popular and surprising songs was his reworking of John Denver's nostalgic “(Take Me Home) Country Roads,” with the setting changed from West Virginia to a world Hibbert knew so well.

As with other reggae stars, Hibbert’s following soared after the release of the landmark 1972 film, “The Harder They Come,” which starred Jimmy Cliff as a poor Jamaican who moves to Kingston and dreams of a career in music. The Jamaican production was a word of mouth hit in the U.S. and the soundtrack, often ranked among the greatest in movie history, included the Maytals’ “Pressure Drop” and “Sweet and Dandy.”

Hibbert also appeared in the film, as himself, recording “Sweet and Dandy” in the studio while Cliff's character looks on with awe. Around the same time, the Maytals signed with Island Records and released the acclaimed album “Funky Kingston,” which the critic Lester Bangs called “the most exciting and diversified set of reggae tunes by a single artist yet released.” (The album would eventually come out in two different versions).

By the mid-1970s, Keith Richards, John Lennon, Eric Clapton and countless other rock stars had become reggae fans and Hibbert would eventually record with some of them. A tribute album from 2004, the Grammy-winning “True Love,” included cameos by Richards, Bonnie Raitt, Ryan Adams and Jeff Beck. Hibbert also was the subject of a 2011 BBC documentary, “Reggae Got Soul,” with Clapton, Richards and Willie Nelson among the commentators.

A guest appearance on “Saturday Night Live” in 2004 brought Hibbert an unexpected admirer, the show's guest host, Donald Trump, who in his book “Think Like a Billionaire” recalled hearing the Maytals rehearse: "My daughter Ivanka had told me how great they were, and she was right. The music relaxed me, and surprisingly, I was not nervous.”

The Maytals originally were a vocal trio featuring Hibbert, Henry “Raleigh” Gordon and Nathaniel “Jerry” Mathias, with the group later adding such instrumentalists as bassist Jackie Jackson and drummer Paul Douglas. They broke up in the early 1980s, but the following decade Hibbert began working with a new lineup of Maytals.

Hibbert's career was halted in 2013 after he sustained a head injury from a vodka bottle thrown during a concert in Richmond, Virginia, and suffered from headaches and depression. But by the end of the decade, he was performing again and in 2020 he released another album, “Got To Be Tough,” which included contributions from Ziggy Marley and Ringo Starr, whose son, Zak Starkey, served as co-producer.

Grammy nominations for Hibbert included best reggae album of 2012 for “Reggae Got Soul” and best reggae album of 2007 for “Light Your Light.” Hibbert was ranked No. 71 on a Rolling Stone list, compiled in 2008, of the 100 greatest contemporary singers. In 2012, he received the Order of Distinction by the government of Jamaica for outstanding contribution to the country's music.

REMEMBERING THE 2012 BENGHAZI ATTACK THAT KILLED 4 AMERICANS: 'THE US WILL NEVER FORGET THIS OUTRAGE'

Married to his wife, Doreen, for nearly 40 years, Hibbert had eight children, including the reggae performers Junior Hibbert and Leba Hibbert.

Frederick Nathaniel Hibbert ("Toots" was a childhood nickname) was born in May Pen, Parish of Clarendon. He was the son of Seventh-day Adventist ministers and would remember miles-long walks along dirt roads to schools, hours of singing in church and private moments listening to such American stars on the radio as Ray Charles and Elvis Presley.

By adolescence, his parents had died and he had moved to Trench Town in Kingston, where the local music scene was thriving, moving from street parties to recording studios and drawing such future stars as Bob Marley and Desmond Dekker. He formed the Maytals, named for his hometown, with fellow singers Matthias and Gordon, started working with Jamaican record producer Coxsone Dodd and quickly became the star of the national festival competition that started in 1966. The Maytals (eventually renamed Toots & the Maytals) won in the inaugural year with “Bam Bam,” prevailed in 1969 with “Sweet and Dandy” and 1972 with “Pomp and Pride." Hibbert would joke that he thought it best to start skipping the festival because winning came so easily, although he returned in 2020 with the bright, inspirational “Rise Up Jamaica.”

The Maytals began when ska was the most popular music, continued to rise during the transition to the slowed down rocksteady and were at the very forefront of the faster, more danceable sound of the late ‘60s. Their uptempo chant “Do the Reggay” is widely recognized as the song which gave reggae its name, even if the honor was unintended.

“If a girl didn’t look so nice or she wasn’t dressed properly, we used to say she was streggay. I was playing one day and I don’t know why but I started singing: ‘Do the reggay, do the reggay’ — it just stuck," he told the Daily Star in 2012. "I might have stuck with calling it streggay if I’d thought longer. That’d be something — everyone dancing to streggay music.”