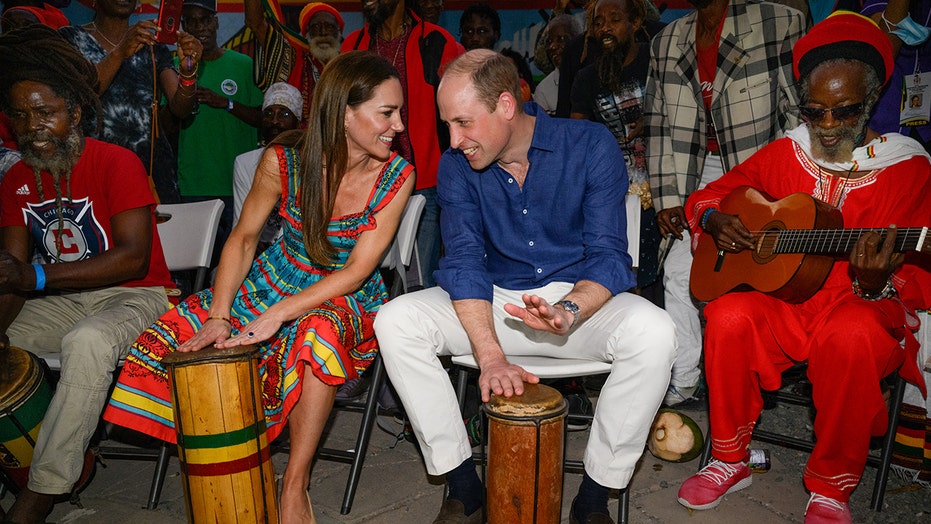 Prince William and his wife Kate Middleton are enjoying the sounds of Jamaica.

The Duke and Duchess of Cambridge touched down on Trench Town, Kingston – the birthplace of reggae – on Tuesday.

The British royals toured the Trench Town Culture Yard Museum where reggae icon Bob Marley lived and interacted with other celebrated artists. William, 39, and Middleton, 40, learned about the impact of reggae and how it continues to be influential today. They even joined in some live music and played the drums.

Prince William, Duke of Cambridge and Catherine, Duchess of Cambridge play drums during a visit to Trench Town Culture Yard Museum where Bob Marley used to live, on day four of the Platinum Jubilee Royal Tour of the Caribbean on March 22, 2022, in Kingston, Jamaica. The Duke and Duchess of Cambridge are visiting Belize, Jamaica, and The Bahamas on their week-long tour. (Photo by Pool/Samir Hussein/WireImage)

Donnette Dowe, manager of Trench Town Culture Yard, told the Jamaica Gleaner that she hoped the royal visit will encourage tourism. Visits to the cultural site have fallen significantly amid the coronavirus pandemic.

PRINCE WILLIAM, KATE MIDDLETON SWIM WITH SHARKS IN BELIZE DURING TOUR OF CARIBBEAN

"I’m excited about that, that the prince chose to visit our community," she told the outlet. Dowe added that the planned visit has also provided short-time employment for some residents.

The couple also joined some young soccer players, including the winners of Jamaica’s Manning Cup, on a local field. It is noted that Marley, who passed away in 1981, was a passionate soccer player.

Prince William, Duke of Cambridge plays football during a visit to Trench Town, the birthplace of reggae music, on day four of the Platinum Jubilee Royal Tour of the Caribbean on March 22 in Kingston, Jamaica. (Photo by Karwai Tang/WireImage)

During the visit, William was excited to see Leon Bailey, who plays for his favorite team, Aston Villa. At one point, he showed off his own skills as he took part in a quick game while the duchess cheered him on. They went on to meet several Jamaican sports stars, including the Olympics bobsleigh team.

Despite the outpouring of support from some locals, the royal tour has been faced with controversy. Protesters gathered before William and Middleton’s arrival wearing T-shirts emblazoned with a pair of shackled Black wrists surrounded by the phrases "Seh Yuh Sorry!" and "Apologize now!"

The protest in front of the British High Commission in Kingston came a couple of days after dozens of prominent leaders in Jamaica publicized a letter demanding that Britain apologize and award its former colony slavery reparations.

Demonstrators gathered March 22 in Kingston, Jamaica to protest the official visit of Prince William and Kate to the former British colony and demand the monarchy apologies for its role in the slave trade.  (Photo by Ricardo Makyn / AFP) (Photo by RICARDO MAKYN/AFP via Getty Images)

They also decried the week-long Central American and Caribbean tour that the Duke and Duchess of Cambridge embarked on Saturday, which coincides with Jamaica’s 60th independence anniversary and the 70th anniversary of Queen Elizabeth II’s coronation.

"Kings, Queens and Princesses and Princes belong in fairytales, NOT in Jamaica!" read one poster held aloft by a young girl who joined the protest.

The royal couple’s trip, which began with a stop in Belize followed by scheduled visits to Jamaica and the Bahamas, was organized at the queen’s behest as some countries debate cutting ties to the monarchy like Barbados did in November.

Prince William, Duke of Cambridge and Catherine, Duchess of Cambridge meet The Jamaica National bobsleigh team during a visit to Trench Town. (Photo by Pool/Samir Hussein/WireImage)

The British empire controlled Jamaica for more than 300 years and forced hundreds of thousands of African slaves to toil the island under brutal conditions. Sugar replaced tobacco and cocoa as the main crop, with some 430 sugar estates reported by the mid-1700s, up from 57 nearly a century prior, according to Jamaica Information Services, a government agency.

The group protesting the royal visit noted in its letter that the British raped and killed thousands of slaves as it sought an apology for 60 reasons, including "for refusing to acknowledge the historic trade in Africans as a crime against humanity," and for "pretending that the British led the abolition movement, when our ancestors worked, prayed and fought hard for this."

Ahead of their trip, Jamaican singer Beenie Man told TV show "Good Morning Britain" that the U.K. still controls the commonwealth of Jamaica. "It’s all about the Queen, and the Queen serves and the Queen this and that – but what are they doing for Jamaica?" he said. "They’re not doing anything for us."

Sources have shared that the Duke and Duchess of Cambridge are aware of the protests over their visit. (Photo by Pool/Samir Hussein/WireImage)

The monarchy has said that Britain and Jamaica have a strong trade relationship, with the island exporting goods including rum and raw cane sugar to the U.K. It also noted the creation of programs targeting poverty, security, natural disaster management, social issues and the economy.

An estimated 55,000 British citizens live in Jamaica, while some 800,000 people of Jamaican descent live in the United Kingdom. The relationship between the two countries soured in recent years after some Caribbean people who had long lived in Britain legally were denied jobs, housing or medical care, with some deported because they didn’t have the required paperwork. Britain has since apologized and pledged compensation.

Sources told People magazine that both William and Middleton are aware of the protests. The prince is also expected to acknowledge the issue of slavery in his speech on Wednesday evening.

Prince William is second in line to the British throne. (Photo by Samir Hussein/WireImage)

Sources also pointed out that any decision about Jamaica becoming a republic is for the people and government to decide.

The couple will end the trip in the Bahamas, where they’ll compete in a sailing regatta in honor of the queen’s Platinum Jubilee.

William is second in line to the throne after his father, Prince Charles. The trip is intended to strengthen the U.K.’s ties with Commonwealth countries as the queen, William's grandmother, marks 70 years on the throne.