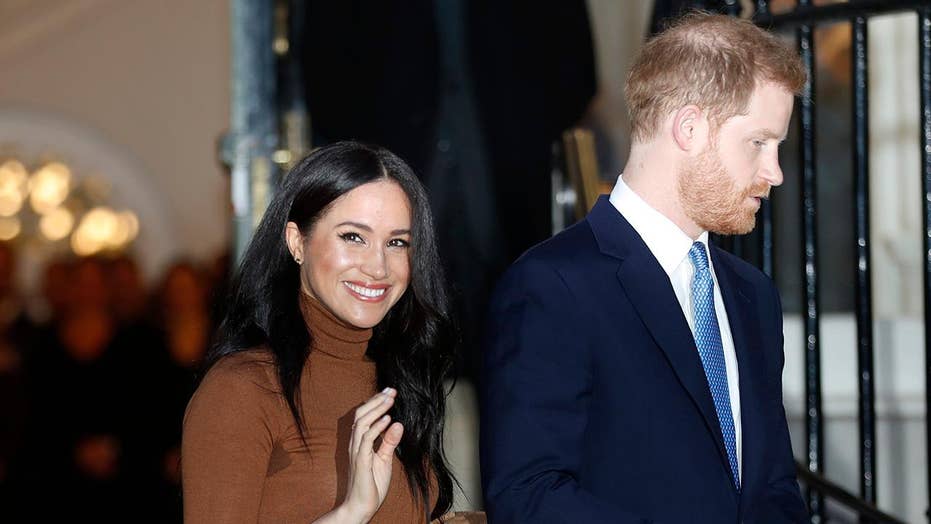 Duke &amp; Duchess of Sussex will no longer use ‘Royal Highness’ titles

Queen Elizabeth and Buckingham Palace released much-anticipated statements on Saturday confirming that Prince Harry and Meghan Markle will no longer use their royal titles and will move forward with their initial "Megxit" plan in the spring of 2020.

Prince Harry and Meghan Markle will no longer use their royal titles, Queen Elizabeth and Buckingham Palace announced in respective statements. (Andrew Milligan/Pool Photo via AP)

Prince Harry, Duke of Sussex. Meghan, Duchess of Sussex and Catherine, Duchess of Cambridge ride by carriage down the Mall during Trooping The Colour, the Queen's annual birthday parade, on June 08, 2019 in London, England.  (Getty)

The shocking double statements come just days after the queen held a pivotal summit to discuss Prince Harry and Markle's royal departure with her grandson and other members of the monarchy while the Duchess remained in Canada with 8-month-old Archie.

Prince Harry and Markle first announced their decision to become part-time members of the royal family on Jan. 8, shocking the world and their family members with the news.

"We have chosen to make a transition this year in starting to carve out a progressive new role within this institution," the couple shared on Instagram. “We intend to step back as ‘senior’ members of the Royal Family and work to become financially independent, while continuing to fully support Her Majesty The Queen. It is with your encouragement, particularly over the last few years, that we feel prepared to make this adjustment."

"We now plan to balance our time between the United Kingdom and North America, continuing to honor our duty to The Queen, the Commonwealth and our patronages," they continued. "This geographic balance will enable us to raise our son with an appreciation for the royal tradition into which he was born, while also providing our family with the space to focus on the next chapter, including the launch of our new charitable entity."

Prince Harry and Meghan Markle will officially no longer hold the titles of Duke and Duchess of Sussex, Buckingham Palace confirmed on Saturday. (AP Photo/Kirsty Wigglesworth)

"Megxit" comes after Prince Harry and Markle's many attempts to put an end to the scrutiny they've faced since their royal engagement in 2017. It also comes at a time of strain for Prince Harry and his older brother, Prince William.

“There is no doubt that the relationship between Princes Harry and William is at an all-time low,” Bullen said.

In October 2019, Prince Harry and Markel opened up to host Tom Bradby in ITV’s documentary “Harry & Meghan: An African Journey,” which aired in both the U.K. and U.S. While the special aimed to give audiences a behind-the-scenes glimpse into the couple’s recent royal tour of southern Africa, the couple also spoke out about enduring ruthless tabloid rumors as new parents.

Even the queen had hinted at a royal family rift ahead of the Christmas holiday.

While giving her annual holiday address to the nation, a photo of Harry, his wife and their new child was shockingly missing from the queen's desk, as photos of other immediate family members -- including Prince William, his wife Kate Middleton and their three children -- were framed beside Her Majesty.

Markle, 38, and Prince Harry, 35, welcomed son Archie Harrison Mountbatten-Windsor in May 2019. The baby’s arrival came a year after the couple tied the knot in a televised royal ceremony in May 2018.