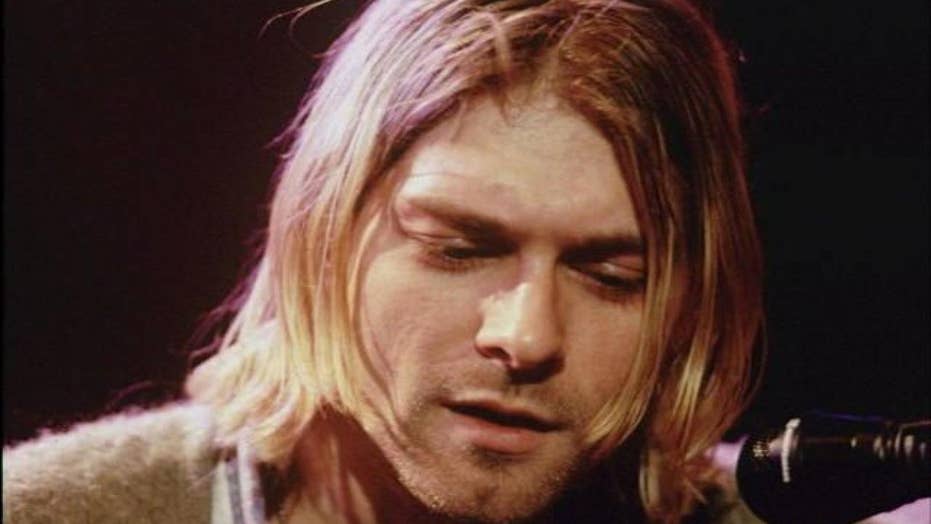 Nirvana's former manager Danny Goldberg is opening up about the last time he saw the troubled rock star in his new memoir, 'Serving the Servant: Remembering Kurt Cobain.'

April 5 marks 25 years since Nirvana frontman Kurt Cobain’s tragic suicide. Now, in discussing his new memoir, “Serving the Servant: Remembering Kurt Cobain,” the band’s former manager Danny Goldberg is opening up about the last time he saw the troubled rock star during an intervention staged by “maybe half a dozen people” who were worried about the singer’s heroin addiction.

“I was in New York, and [Kurt's wife] Courtney [Love] called and asked if I would come and be part of an intervention,” Goldberg recalled to Yahoo Entertainment in an interview published Thursday about the meeting that took place nearly a week before Cobain fatally shot himself at age 27. “She was really worried about Kurt, said it was the worst she’d ever seen him and so forth.”

Kurt Cobain (L, behind baby), is shown as he arrives with wife Courtney Love, holding their daughter Frances Bean Cobain, for the MTV Music Awards in September 1992 in Los Angeles, Calif. (Reuters)

Goldberg, a longtime staple in the music business said he along with Janet Billig Rich, another talent manager at Gold Mountain Entertainment, “found some dude who had been part of interventions before, a 12-step person” to lead the intervention, explaining that they felt he would be able to add “a little gravitas to it.”

“It’s so hard to know it’s going to work, and you just get advice from people, and it’s a lot of guesswork involved,” Goldberg added. The author described that Cobain became upset and was “really stoned” when he, Billig and others arrived at Love and Cobain’s Seattle, Wash. home. Goldberg told the news site that Cobain felt he was being ambushed and “invaded” by “people lecturing him on how he should behave.”

In referencing Goldberg’s memoir, the outlet reported that Cobain allegedly became especially irate after Billig had flushed a portion of his drug stash down the toilet and Goldberg maintains that everyone who was present in Cobain’s home that day had only the best intentions for the superstar.

However, despite the efforts of Love, Billig and himself, Goldberg admits in “Serving the Servant” that he harbors some regret about how the situation was handled and expresses that he may have acted selfishly after losing patience with the embattled lead-singer.

“I was in a hurry to get home, and I let an impatience and brittleness get into my tone. That sounds like a subtle thing, but it’s the whole ball game when you’re communicating with somebody. It’s not always the words; it’s how you say them,” Goldberg clarified.

“I didn’t want to miss the plane to L.A.; I’d been away from my family in New York, and this was sort of an extra stop. Otherwise maybe – maybe if I’d stayed another hour, I would’ve thought of some intelligent thing to say, or got him to take a walk. You know, you just go over in your head: ‘Is there something I could’ve done?’”

In a last-ditch effort to rectify the situation, Goldberg said he called Cobain when he had finally gotten home to apologize for the botched intervention and to express the love he had for him, adding that he even let Cobain speak to his toddler daughter Katie because she and Cobain had forged a strong bond.

“Kurt loved her, and they used to play a lot; before [daughter] Frances [Cobain] was born, it was almost like a practice kid for him,” said Goldberg. “I just said, ‘Look, I’m so sorry if I came across as judgmental. You know I love you and I just want you to be happy, and I’m just trying to be helpful.’”

“[Katie] told him that she was upset that Frances had pinched her the last time they were together, and could Kurt please talk to her about that? And he got back on — and he still sounded really just depressed and wiped-out. I just told him I loved him, and that was it,” Goldberg lamented. It was the last time Goldberg and Cobain would ever speak again.

To this day, Goldberg says he still grieves the death of Cobain and despite the backlash he continues to receive for his eulogy of the Nirvana crooner, he stands by his decision to celebrate Cobain’s life and feels that addiction should be seen as a disease instead of a series of bad decisions.

In this undated photo provided by Kim Cobain, a young Kurt Cobain plays piano in his childhood home in Aberdeen, Wash. (AP Photo)

“I felt enormous grief, as I still do, but I just see it as a disease that no one can cure. If somebody died of cancer at 27, you wouldn’t be angry with them; you would just mourn them,” said Goldberg. “And I think this was a mental illness that nobody knew how to cure.”

Still, Goldberg sees Cobain’s suicide as a shocking void that he will never be able to fill and empathizes with those who have dealt with suicide by someone they know and love.

“I’ll never get over it. Nobody who cared about him will. And no one who cared about less famous people who killed themselves will ever get over it. But it’s what happened, it’s part of the mystery of the human condition, and I love him anyway, I’m glad he was alive for those 27 years, I wish he hadn’t done it, but I’m glad I got to know him, and that the world got to know his music.”