AJ McCarron is currently dating the reigning Miss Alabama ,Katherine Webb, and while last night’s 42-14 yawner failed to keep fans on the edge of their seats, Webb managed to keep fans, Twitter users, and one announcer in particular, entertained.

ESPN announcer Brent Musburger, 73, seemed to perk up when the camera panned to the audience and focused on Webb. He introduced her as McCarron’s girlfriend and called her a “lovely lady.”

"You quarterbacks, you get all the good looking women," Musburger said, referring to Webb. "What a beautiful woman."

Following his musings, the Twitterverse exploded with posts, mostly agreeing with Musburger.

“By far the best part of the #BCS game and my MVP is KatherineWebb!,” one user tweeted. “WOW! Roll Tide indeed! AJ is #blessed!”

Webb, who reportedly had a very modest Twitter following before the game, gained more than 100,000 followers after the Alabama win.

“So extremely blessed...,” she wrote following the game. “Congrats to Alabama and making history! #BCSChamps” 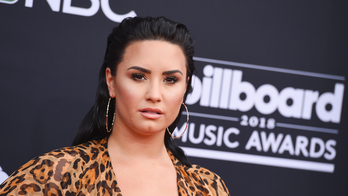