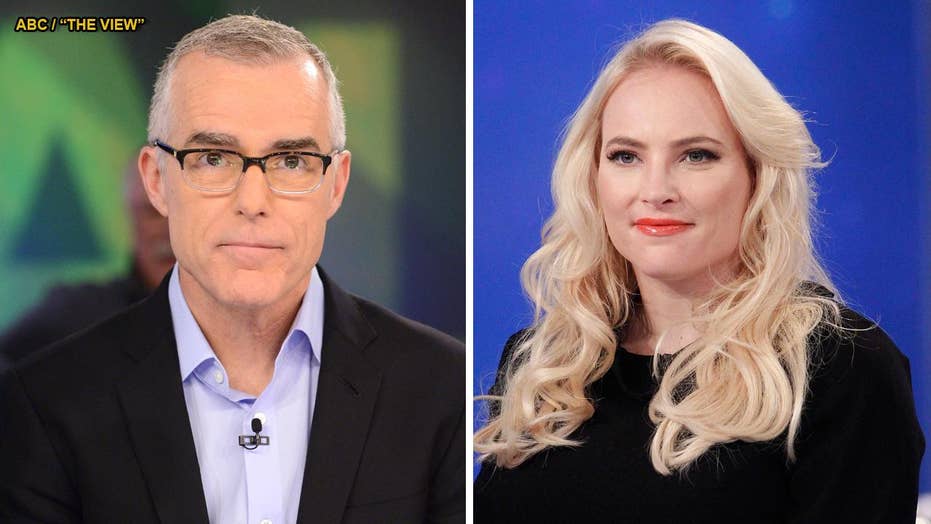 'The View' co-host Meghan McCain made former FBI director Andrew McCabe uncomfortable during an interview Tuesday when she directly asked if he was a source for The New York Times. McCabe denied the allegations and attempted to explain his side of the story saying he was unsure as to why James Comey remembered their conversations differently.

“The View” co-host Meghan McCain confronted Andrew McCabe on Tuesday, asking the former FBI director point blank if he was a source for The New York Times.

“I don’t believe you’re a reliable narrator and I’m not convinced this isn’t just some kind of PR campaign to stop yourself from getting indicted,” McCain said. "You were fired at the recommendation of the FBI, which, in your book, you cite four times how great of an organization it is, for your lack of candor.”

McCabe was fired last year by then-Attorney General Jeff Sessions after an inspector general report said McCabe lied about leaking to reporters about the FBI's investigation of Hillary Clinton's emails.

The icy McCain then asked McCabe to come clean regarding whether or not he was a leaker.

A stunned McCabe shot back, “Absolutely not, not at any time, ever.”

The former FBI boss then tried to explain his side of the story to the ABC News daytime talk show.

“When I was serving as deputy director, I was one of two people in the FBI that had the authority to disclose information to the media,” he said. “That is an FBI policy, it’s baked into the way that we run media relations in the organization. So I transacted on issues regarding the media every single day.”

McCain responded, “Then why did James Comey deny the claim that he approved your leaks to the press?”

Co-host Joy Behar then chimed in, “I thought you guys wrote everything down.”

McCabe responded that they wrote things down when dealing with people they didn’t trust.

McCabe is on a book tour for "The Threat: How the F.B.I. Protects America in the Age of Terror and Trump."