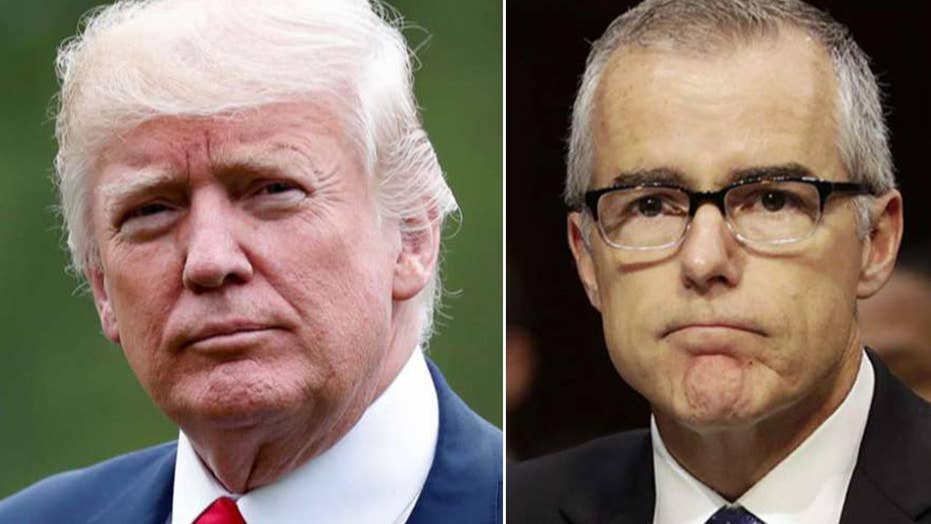 President Trump on Tuesday denied telling Andrew McCabe his wife is “a loser” because of her unsuccessful Democratic run for the Virginia state Senate in 2015, an allegation the former FBI deputy director made during his anti-Trump book tour.

“I never said anything bad about Andrew McCabe’s wife other than she (they) should not have taken large amounts of campaign money from a Crooked Hillary source when Clinton was under investigation by the FBI,” Trump tweeted. “I never called his wife a loser to him (another McCabe made up lie)!”

During a CBS “60 Minutes” interview on Sunday, McCabe described one of his first conversations with the newly-sworn-in president and said the president asked about his wife Jill McCabe’s 2015 campaign. According to McCabe, Trump asked, “What was it like when your wife lost her race for state Senate? It must have been really tough to lose.” Similar ancedotes had been reported, including by Fox News, before.

“And I said, ‘Well, it’s tough to lose anything,” McCabe recalled. ‘“But my wife has refocused her efforts on her career.’ And he then said, ‘Ask her what it was like to lose. It must be tough to be a loser.’”

Trump in the past has drawn attention to how Jill McCabe received donations from Virginia Gov. Terry McAuliffe's super PAC during the time. McAuliffe is a close Clinton ally.

Trump has questioned whether it was a conflict of interest for Andrew McCabe to have a role in the FBI’s Hillary Clinton email case investigation because of his wife’s campaign. McCabe did not recuse himself from the Clinton investigation until a week before the election.

“No man wants to hear anyone call his wife a loser, most of all me,” McCabe said in the interview. “My wife is a wonderful, brilliant, dedicated physician who tried to help her community. So she is no loser. It was just bullying. So rather than get into an argument with the president of the United States, we, I said, ‘Okay, sir.’ And we hung up and ended the call.”

McCabe was fired last year by then-Attorney General Jeff Sessions after an inspector general report said McCabe lied about leaking to reporters about the FBI's investigation of Clinton's emails.