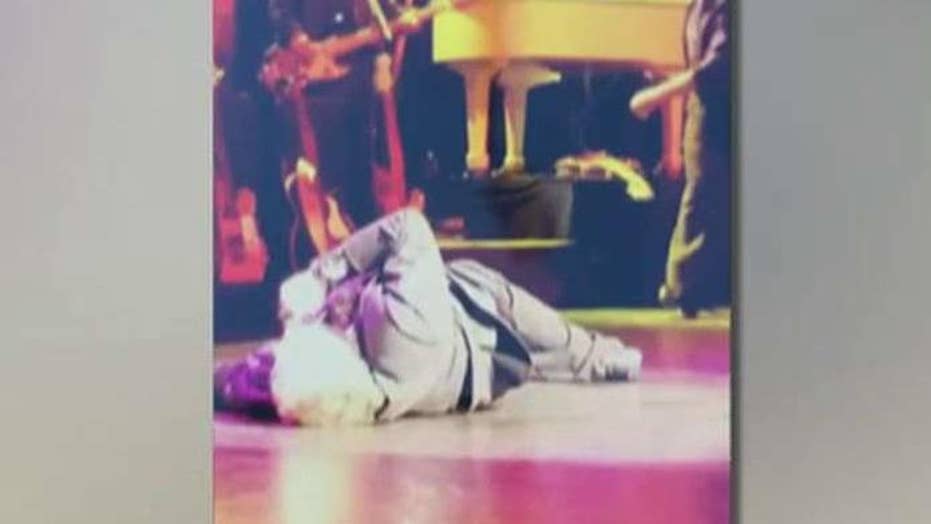 Legendary rock singer Meat Loaf is in stable condition after he collapsed on stage Thursday during a performance in Canada, his rep told FOX411.

The 68-year-old collapsed due to "severe dehydration" towards the end of his concert at the Northern Jubilee Auditorium in Edmonton, Alberta Canada, his rep said.

He was admitted to a nearby hospital to "undergo routine rests" and his "vital signs are stable and normal — he's responsive and recovering well."

"He extends his heartfelt thanks for everyone's support
and well wishes, and is expecting a speedy and full recovery," a statement read.

A spokesman for Alberta Health Services said a patient was transported from Edmonton's Jubilee Auditorium to a hospital, but declined to identify the patient.

“He was performing ‘I Would Do Anything For Love,’ and all of a sudden in the middle of it he collapsed right on stage. We weren’t sure at first whether it was part of the act or it was something for real,” she said.

Sundmark said Meat Loaf was being transported to a hospital around 10 p.m. local time. Fans were told to clear the venue.

Britt Brewer attended the concert with her brother, mother and co-worker. She told the Journal the whole incident was “surreal.”

“It looked at first like he was just being theatrical and lying down on the stage,” she said.

Meat Loaf had appeared to be struggling earlier in the performance, concertgoer Mikey McBryan, 33, said.

"It was him forgetting words, he wasn't on cue, but it was forgivable," he said. "We're all loving it and going crazy, and then it just took a turn for the worst."

The 68-year-old had canceled two other concerts in recent days — in Regina on Saturday and in Calgary on Tuesday — citing ill health.

Born Marvin Lee Aday, Meat Loaf made his name with theatrical stage productions and operatic songs, including "Paradise by the Dashboard Light," ''Two out of Three Ain't Bad" and "Bat out of Hell."

He won a Grammy Award for "I'd Do Anything for Love (But I Won't Do That)." He also appeared in the films "The Rocky Horror Picture Show" and "Fight Club."

The Journal also noted that he had previously collapsed at a show in a 2003 London show and a 2011 Pittsburgh concert. According to CBC, he began an eastern and central Canada tour last month.

The singer said he suffers from asthma and from a medical condition that causes an irregular heartbeat.