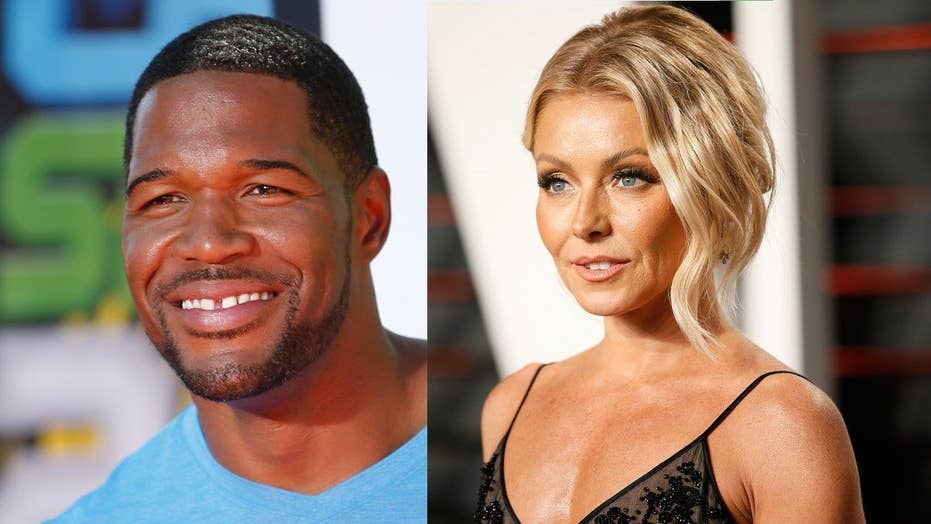 Four4Four: Kelly Ripa a no-show on 'Live' after co-host Michael Strahan leaves her for 'GMA' gig

Just days before Michael Strahan's final show, Kelly Ripa opens up about how she found out that her co-host of four years would be leaving "Live! With Kelly and Michael" to take a full-time position at "Good Morning America."

A source told ET that Ripa was "blindsided" by the news that Strahan would be leaving the daytime talk show, and in an interview with People magazine, she admits to feeling that ABC did not consider her in this decision. "There's a part of me that can say, 'Okay, I understand. This may have been an oversight,'" Ripa explains. "And again, after 26 years, at this point we are like a family. And sometimes when you are so comfortable with somebody, you may not give them the same consideration as somebody you're not as comfortable with – a certain formality falls away."

The 45-year-old TV personality defends her choice to take a day off and move forward with her scheduled vacation so she could come to terms with Strahan's departure. "I said, in the room, 'I am going to take the day off.' I needed to actually sit and gather information," she recalls. "I needed to make sure I said the appropriate things on TV and didn't just come out and say whatever."

Ripa returned to "Live!" that following Tuesday, April 26, and talked about her need for "communication, consideration, and most importantly, respect in the workplace."

The co-host further tells People she found herself having to face the "Live!" staff who feared for their jobs. "In that moment there were people looking at me, saying, 'Tell us this is going to be okay. Are we going to be okay?'" she says. "And I am fine, but I need assurances that we're all going to be fine."

While it's been a dramatic few weeks for "Live!," Ripa is now in a state of forgiveness. "I'm not dealing with monsters. I don't think of anybody as a monster or out to get me. But sometimes stability and dependability can be misinterpreted as passive," she insists. "People make mistakes, and we're all human. They're human and I'm human. We all have these moments, and it's about how you move forward and how you begin again."

While Ripa says she's "excited" for Strahan's new job, she contends that it's not easy to find a co-host that will have the "chemistry and camaraderie and trust" that she and Strahan share. "It doesn't fall out of the sky," she continues. "It takes a lot of work, and it takes a group discussion."

That being said, she knows that the former NFL pro will do well at GMA. "I get it. We're excited for Michael. He wanted that job, and it's great for him. I think it is a perfect match, I really do," she touts. "However, what nobody considered is there's a whole other group of people that it really impacts, because we have to now find another great person."

WATCH: Kelly Ripa Jokes About Contract Negotiations During Her Third Day Back on 'Live!'

Last week, Strahan shared with ET how he's feeling in the days leading up to his "Live!" exit on Friday, May 13. The former NFL pro said that he thinks "everyone got the wrong impression" of what all went down.

"Every week is great, every day is great for me. I'm on the other side of the dirt," he explained. "Yeah I'm looking forward to [moving to 'GMA'], but I'm still looking forward to going to work for Live!'... I love being there. I still love it."