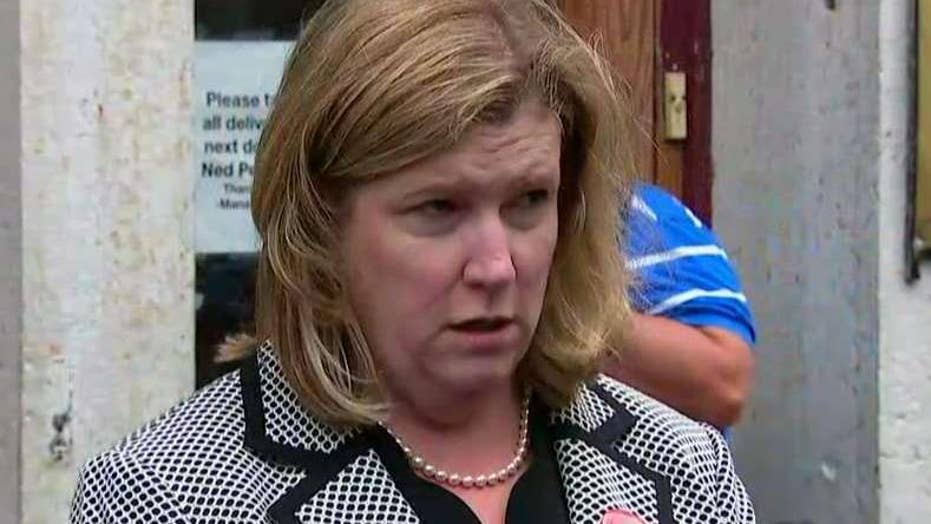 Dayton mayor says Trump's rhetoric has been 'painful' ahead of visit

Dayton, Ohio Mayor Nan Whaley speaks to the press after President Trump confused her city with Toledo during his remarks on the weekend's mass shootings.

She tweeted early Monday, “Don’t you hear us, @realDonaldTrump? Don’t you hear our pain? You have the power to become a hero. Why don’t you take it?”

“For a man who clearly loves being well-liked, it’s indescribably mind-numbing to see him blatantly and murderously ignore doing ONE THING that would not only make people happy but would SAVE PEOPLE’S LIVES," she added. "True leaders don’t stand back and watch the world burn.”

Musgraves, 30, went on to go back and forth with fans about gun control.

"I love keeping things about the music and usually stay out of politics publicly UNTIL it barrels past political party preference points and dangerously encroaches on fundamental human rights," she wrote. "It’s then not political issue anymore. It’s a matter of heart. Of humanity. Of survival."

She replied to a user who told her to "stick to singing," writing, "Let me be clear - I’m from Texas. I grew up around hunting and guns. There’s a time and place for that and even self protection in ways..but this is different. The system is majorly flawed and NOBODY NEEDS ANYTHING REMOTELY AUTOMATIC. PERIOD. They’re mass killing machines."

Her last tweet on the subject so far reads, "Hold your politicians accountable. Hold the president accountable. Start paying attention to actual ways we can make change happen. I promise I will too Love to anyone out there w/ fear & anxiety like me. Hold on to your loved ones & let’s all get thru this awful period alive."

On Sunday, Musgraves urged the audience at Lollapalooza in Chicago to chant "somebody f—king do something" about “the s—t that’s happening in the last 24 hours — much less everything that’s happened in the last 200-and-f—king 15 days in America,” referencing the 250 mass shootings reported within 215 days. “So, I don’t know what the answer is, but obviously something has to be f—king done. Maybe somebody will hear us if we all yell together and say, ‘Somebody f—king do something!'”

Maren Morris, who was present at the mass shooting at a Las Vegas country music festival in October 2017, also spoke out, tweeting, "If I see one more politician use their “thoughts & prayers” tweet template they have backburnered for every mass shooting, I’m gonna be sick. We need common sense reform, not 280 meaningless characters. I love you, Texas & Ohio. No one deserves this."

The El Paso shooting is one of the deadliest in modern U.S. history, and the death toll rose Monday as doctors announced that two more of the wounded had died, bringing the total slain to 22. Victims ranged in age from 15 to 90 years old.

The 21-year-old suspect was booked on capital murder charges. Authorities said Sunday the crimes he's accused of are being investigated as domestic terrorism. Officials were also looking into whether hate crime charges against himare appropriate. Although Fox News has identified the suspect, neither his name nor his photo are being aired or published unless necessary for clarity.

Nine people were killed in the Dayton shooting. The 24-year-old gunman, who reportedly compiled "rape" and "kill" lists when he was in high school, was killed by police.