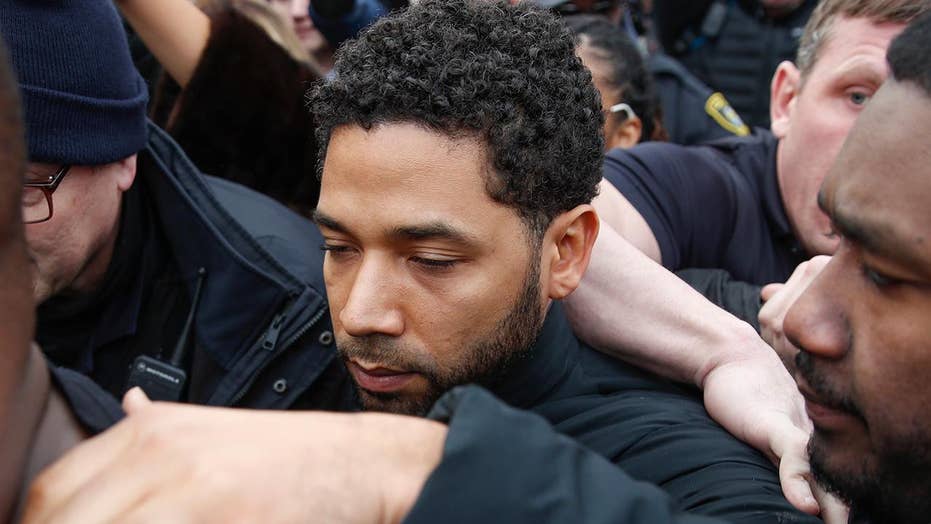 Jussie Smollett's upcoming appearance in an episode of "Drop the Mic" was scrapped by TNT Thursday after the actor was charged on a felony disorderly conduct charge for allegedly filing a false police report for a hate crime.

But a leaked video of Smollett's appearance obtained by TMZ Friday shows the "Empire" actor taking the opportunity to diss President Donald Trump while battling "Orange Is The New Black" actress Danielle Brooks.

"'Orange Is The New Black' made Danielle a star, but tonight's the first time she's going to face some real bars," Smollett raps. "I wanted Uzo [Aduba] or Samira [Wiley] they gave me this chump. You're the worst orange person since Donald Trump."

The actor continues: "But no one sells streaming services like you do. I saw you were on Netflix so I bought Hulu. I can't believe they would compare my rhymes to this trash, yo, that's like comparing Obama to say like, Stacey Dash?"

TNT said Thursday it isn't going to the air the episode with Smollett "in the interest of not being exploitative of an incredibly sensitive situation."

Actress Danielle Brooks, who is best known for portraying Taystee on Netflix's "Orange Is The New Black," poses as she arrives at the 67th Primetime Emmy Awards in Los Angeles, California September 20, 2015. (Reuters)

Chicago cops laid out their case against the "Empire" actor Thursday morning, accusing the TV star of orchestrating an elaborate hoax involving two "bogus" crimes – one involving an alleged attack, and one involving a threatening letter -- all in order to get a pay raise.

Smollett, 36, told police last month that he was attacked by two masked men as he was walking home from a Subway sandwich shop at around 2 a.m on Jan. 29. The actor, who is black and gay, said the masked men beat him, made derogatory comments and yelled "This is MAGA country" – a reference to President Donald Trump's campaign slogan, "Make America Great Again" – before fleeing.