How much of a problem did Joe Biden have in 1987 when reporters started noticing that some of his speeches sounded a little too familiar?

It reached a point where even late-night host Johnny Carson took a jab at Biden, who at the time was a U.S. senator from Delaware and running his first bid for the White House, seeking the 1988 Democratic presidential nomination.

“On the political scene, one of the Democratic candidates, a Senator Joseph Biden – have you seen the problem he’s been having?” Carson asked his audience at the start of the “Tonight Show" one evening.

“He went around and made a speech and apparently he quoted a -- I think it was a British politician, took his speech and kind of paraphrased it as his own.

“And then the press got on him. And then he was charged also with taking part of Bobby Kennedy’s speeches.

“And Biden says, not to worry. He reassured his staff, he said, ‘We have nothing to fear but fear itself.’”

Carson was referring to speech Biden gave in Iowa in 1987, when he told a crowd about his coal-mining ancestors in his native Pennsylvania.

But Biden got busted afterward, when the campaign of Democratic rival Michael Dukakis released a tape that proved Biden had lifted portions of the speech from one delivered by then-British Labour Party leader Neil Kinnock.

BILL MAHER MOCKS GUESTS' CONFIDENCE IN BIDEN: 'YOU GUYS ARE WHISTLING PAST THE GRAVEYARD

Soon after the news reports about Biden’s speech – and after Carson's wisecracking -- Biden dropped out of the presidential race.

"I'm angry with myself for having ... put myself in the position of having to make this choice," Biden told reporters Sept. 23, 1987. "And I am no less frustrated for the environment of presidential politics.”

"I'm angry with myself for having ... put myself in the position of having to make this choice."

The incident is included in the video, “Proving Grounds: Iowa,” that appears on the Fox Nation site.

Biden was later accused of using statements from the late Robert F. Kennedy as his own in another speech, and it was also reported at the time that he either “quoted or paraphrased” John F. Kennedy and Hubert Humphrey “without credit.” 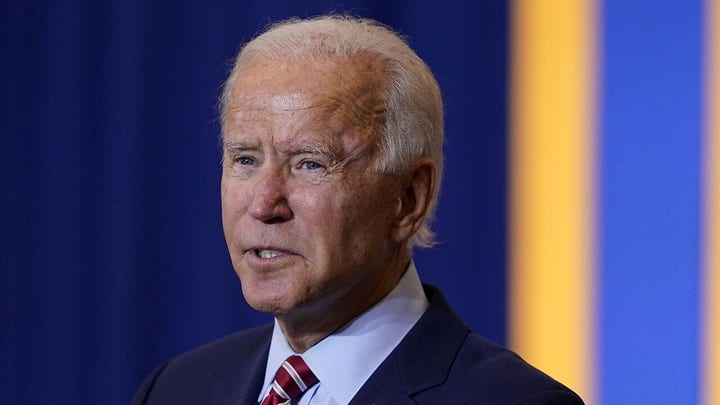 In June 2019, Biden was accused of lifting part of his climate proposal platform from plans published by the Blue Green Alliance and the Carbon Capture Coalition.

Dukakis, who was then the governor of Massachusetts, eventually won the 1988 Democratic nomination but went on to defeat against then-Vice President George H.W. Bush later that year.