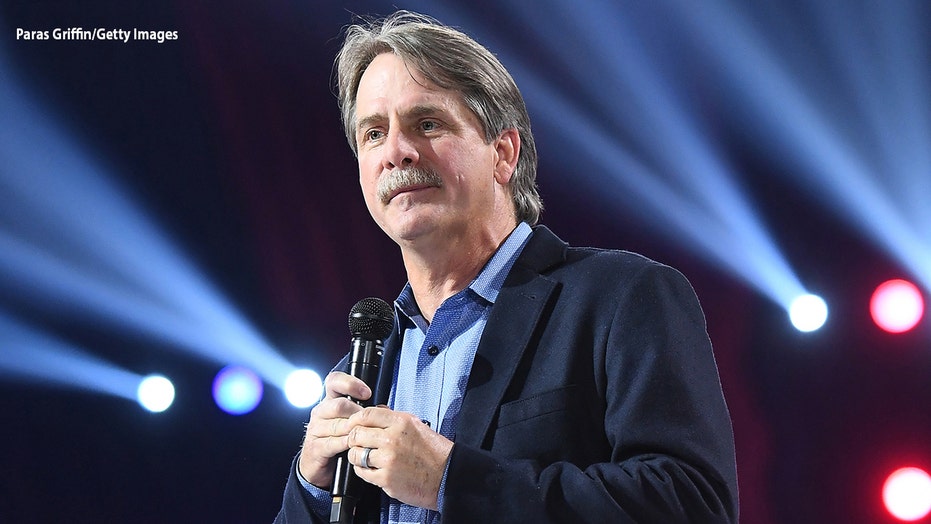 Jeff Foxworthy talks cancel culture in comedy world, new series 'What's It Worth?' on A&amp;E. The series a virtual show where the comic and a team of experts scour the country in search of unique treasurers. The star is the largest selling comedy-recording artist in history, a multiple Grammy Award nominee and best-selling author of more than 26 books.

EXCLUSIVE: Jeff Foxworthy has found one way to make use of his Georgia man cave.

The Georgia-born comic, who was frequently on the road performing across the country before the coronavirus pandemic, is now keeping busy with a new A&E series titled “What’s It Worth?” where the 61-year-old and a team of experts visit someone’s home virtually to find out whether they’re sitting on a gold mine, thanks to their family heirlooms and prized possessions. The objects include pop culture keepsakes, historical relics and more bizarre mementos, just to name a few.

Foxworthy is all for having a good time when it comes to entertaining. The multiple Grammy nominee is hailed as the largest selling comedy-recording artist in history, as well as a best-selling author of more than 26 books. In 2014, Foxworthy was also inducted into the Georgia Music Hall of Fame.

The star spoke to Fox News about cancel culture in today’s comedy world, whether the word “redneck” has changed for him over the years, as well as his favorite treasures to collect.

NORMAN LEAR ON TURNING 98: ‘I REALIZE I’M NOT CONCERNED ABOUT THE GOING, I JUST DON’T LIKE THE LEAVING’

Fox News: As a comedian, what do you make of the cancel culture in today's comedy world?
Jeff Foxworthy: … I talk to my comic friends about this. It was like in the late '80s or '90s if I was writing a routine, I might say, well, men do this and women do that. And then you would have some man or woman say, "Well, I don't do that." And you know, part of me is like, "I know it's a joke." You know, play along. But I started writing, I do this, my wife does that. But we've gotten to the point nobody has a sense of humor about themselves.

And my thought is we're all a mess. We all make mistakes. And in fact, I had gotten to the point where I was saying, when I walked out on stage, that I remind myself right before I walk out that everybody's going through a struggle, everybody. It might be financial, physical, emotional… So I have grace with people because you don't know what they're going through.

And I don't think laughter makes the struggle go away, but laughter is like the release valve that keeps the boiler from exploding. So, let's learn to laugh at ourselves. When other people make a mistake, have grace with them, when we make a mistake, we hope people give us grace in return. And I just would love to see us get back to that.

FORMER ‘DANCING WITH THE STARS’ HOST TOM BERGERON IS ‘CONFIDENT’ HE’LL BOUNCE BACK AFTER BEING LET GO: REPORT

Fox News: Has the meaning of the word “redneck” changed for you over the years since you first started doing comedy?
Foxworthy: Well, I was doing those jokes, like when I first started, and it was in response to people calling me that. I understood it. I grew up in the country. I bow hunt, I fish, I drove a pickup truck, and they were always like, "Oh, Jeff, you just redneck from Georgia."

What I found traveling the country was, this isn't just a Georgia thing. You get 20 minutes outside of any city, and people were pretty much the same. But even as I was writing them, I always made them about being a glorious absence of sophistication. And so I just never viewed it as something nasty or negative. To me, it was more, "Hey, here's somebody that's from the country and they love that lifestyle."

Fox News: As a personal collector, what was it about “What’s It Worth” that made you want to get involved?
Foxworthy: I just love the idea of it because I love all kinds of things. I love old tools. Forever, I would take baseballs with me if I was doing the "Tonight Show" or hosting an awards show, and I would have people sign baseballs. So I have a very eclectic collection of... I have baseballs signed by presidents, and country music artists, and comedians. I love to look for arrowheads and Native American artifacts because I'm always on the road.

It's something to do while you're on the road, but I had stuff that I would go, "Is this worth anything? Or should I get rid of it, hold onto it?" What we found was when the pandemic started, people were doing projects that they had never had time to do. They were cleaning out their attics, they were cleaning out their garages, and they were doing the same thing. They were finding things, and they're like, "Do I get rid of this? Do I put it in a yard sale? Or is it valuable?"

Fox News: What was it like filming this show virtually?
Foxworthy: I was a little bit pessimistic that it would work going into somebody's house virtually and letting them film themselves with their phone and all… It was great. It was so fun to go to people's houses to see how they live, to see where they kept this stuff, which in most cases was in the sock drawer or under the bed.

And I would always laugh at the sock drawer. I'm like day one of burglar school they have to tell you always check the sock drawer, but that's where people hit stuff. And in a lot of cases, I was just flabbergasted by what some of this stuff was worth. I mean, thousands, 10 thousand in one case is half a million dollars somebody had sitting in their house, and they had no idea what it was worth.

Fox News: Was there ever an item that made you say, "Maybe I should offer this person some money for it?"
Foxworthy: *Laughs* Oh, well we just downsized. My kids are grown, and we just went from the big house down to the small house, so my wife probably would have choked me if I had brought anything else into here.

But we did have times like, one couple, they had a newspaper announcing Lincoln's assassination, and they wanted to get that valued. And as I'm talking to them, and they've got their cell phone up. Behind them on the wall, there is a taxidermists-mounted, two-headed calf, which apparently, they didn't think that was weird. And in the corner, there was an open coffin with a skeleton in it. And I'm like, "To heck with the paper, where do you get something like that?”

Fox News: What would you love to add to your collection if given the opportunity, if your wife allowed it?
Foxworthy: … I’m fascinated with Native Americans… I just appreciate how they took care of the land and how they were able to sustain. In North Carolina, I found a stone pipe. It was a pipe, but it was not made out of metal, not made out of clay. Somebody had carved it out of stone, and it's beautiful. And so I guess I just liked the thrill of finding those things, and then researching them, and finding out what they did with them.

Hopefully, I can keep looking for stuff like that. I mean, it's a good way to social distance because you know, I'll go out and walk 25,000 steps a day in a plowed field next to a creek. So who knows, maybe I'll get lucky and find something else.

Fox News: What’s one key piece of advice you would give to someone who thinks they might have something of value, but they don't know where to begin.?
Foxworthy: Well, I would say to contact us. People have started doing that now. Don't alter the thing that you have. Like in one case, somebody had found something that was really old that was made out of cloth, and they thought, well, let me wash it.

Well, we later learned that that actually took away from the value of it. So leave it in the condition that it's in and contact us. And we would love to come in your home virtually and bring in experts that know all about this and tell you what's it worth.

‘FULL METAL JACKET’ STAR MATTHEW MODINE EXPLAINS WHY HE TURNED DOWN ‘TOP GUN,’ ‘BACK TO THE FUTURE'