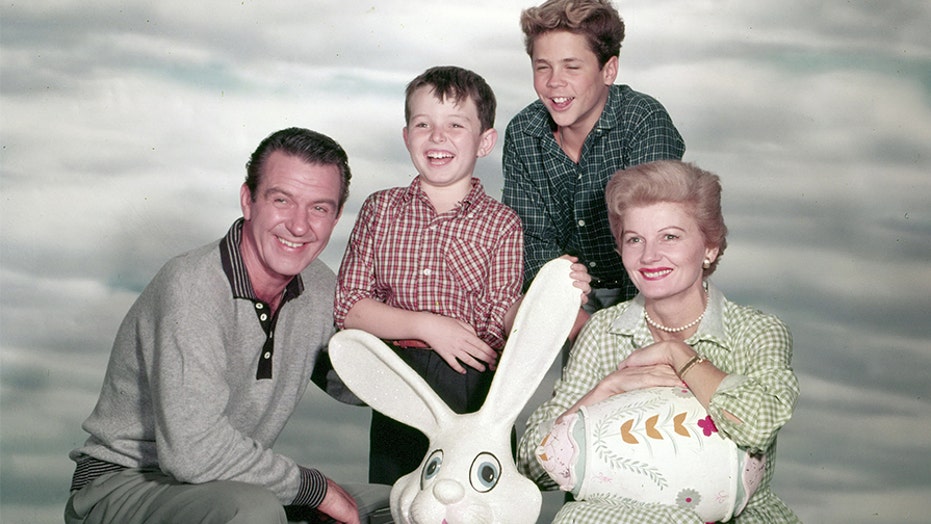 Hugh Beaumont is still recognized as the beloved ‘50s patriarch in “Leave It to Beaver” -- and his daughter insisted he was the real deal.

“He had a lot of input into the character,” Kristan Beaumont told Closer Weekly for the magazine’s latest issue, currently in newsstands.

“When we got into trouble, we usually had a talk with dad, just like on the show. He’d never yell or get upset.”

According to the outlet, the Kansas native originally studied theology before he went on to pursue a Hollywood career. The sitcom, which aired from 1957 until 1963, was one of his proudest achievements.

The hit show chronicled the misadventures of a suburban boy, his family and friends. It starred Jerry Mathers, Tony Dow, Ken Osmond, Barbara Billingsley, as well as Beaumont.

Promotional portrait of the cast of the television show, 'Leave It To Beaver,' circa 1959. Clockwise (from top): American actors Tony Dow, Hugh Beaumont, Barbara Billingsley and Jerry Mathers. (Photo by R. Gates/Courtesy of Getty Images)

“He took his responsibility very seriously,” said Kristan. “That was one of the reasons he did the series. It was a way to support his family.”

Despite the show’s success, Beaumont wasn’t fazed by fame. In fact, when cameras stopped rolling, he found comfort in his family and the great outdoors. Kristen described the beloved patriarch as a man who “loved poetry,” possessed “an infectious laugh” and considered the family’s annual trip to Minnesota as the high point of the year.

“When you got in the car with dad, you drove until you got there--and it was 36 hours!” said Kristan.

She said their annual trip involved balmy days of hiking, swimming and fishing.

“I don’t even think dad cared if he caught anything or night,” she chuckled. “He just loved it.”

After “Leave It to Beaver” came to an end, the outlet noted Beaumont kept busy acting. He also wrote screenplays, short stories and even operated a Christmas tree farm.

During his later years, Beaumont lived in Minnesota. He suffered a stroke in 1970 and did little acting after that.

Closer Weekly shared Beaumont not only remained a friend to the younger actors from “Leave It to Beaver” but he also served as their mentor.

In 1982, Beaumont passed away at age 73. At the time of his death, the New York Times reported he suffered a heart attack while in Germany where he was visiting his eldest son, who was teaching psychology.

“My father believed that if you wanted to change anything, you had to start small,” said Kristan. “You couldn’t do everything at once. He always used to say: ‘You start by tying your shoes.’”