Hollywood is speaking out after protestors managed to breach the Capitol on Wednesday.

The chaos resulted in one protestor being fatally shot as lawmakers remained barricaded inside and evacuations quickly commenced, the Metro Police Department in Washington D.C. relayed to Fox News.

The violence erupted as lawmakers were in the process of certifying the Electoral College votes won by President-elect Joe Biden. They were told to put on gas masks and barricade inside as law enforcement officers tried to restore order.

Celebrities immediately took to Twitter as the shocking scenes unfolded, with Ashton Kutcher urging in a tweet on Wednesday for people to "Support the peaceful transition of power!!!!!!!!"

"That’s being a patriot!" he added.

Pop star Pink told her fans she is "ashamed" of the events that took place on Capitol Hill, writing, "As a United States Citizen, and the daughter of two veterans, and the sister of another, I am ashamed of what is happening in Washington. Hypocrisy, shame, Embarrassment. Unpatriotic hypocritical sheep drinking poison Kool aid. This a sad day for America."

Leah Remini pressed that those who stormed the Capitol are "cowards" and said she is "praying for our country."

"Sickened & saddened by what I’m seeing-on so many levels," added the actress. "Cowards. Disgraceful. We will get through this. #CapitolRiots."

Furthermore, "The Patriot" actor Jason Isaacs was among those who pointed to the double-standard related to protests surrounding the death of George Floyd at the knee of a Minneapolis police officer on May 25 and what transpired on Wednesday.

"Last June peaceful protestors against a racist murder were beaten and gassed near the Capitol," he tweeted. "Today Trump thugs stormed the building unchallenged, directly from a rally where he deliberately stoked their violence with lies. May he be flushed round the U-bend of history forever."

Actress Yvette Nicole Brown echoed the sentiments of Isaacs in her own tweet.

U.S. Capitol Police with guns drawn watch as protesters try to break into the House Chamber at the U.S. Capitol on Wednesday, Jan. 6, 2021, in Washington. (AP Photo/J. Scott Applewhite)

"And now they’re all just being allowed to leave. Is that what I’m seeing?" Brown wrote. "They breached the Capitol, entered offices and left with Lord knows what state secrets & incited violence and yet: No arrests. Not a one. WOW."

Meanwhile, "Sex and the City" star Sarah Jessica Parker lamented the news on Wednesday and said as far as she’s concerned, the breaching of the Capitol is "no surprise."

"Unimaginable. Disgraceful. Shocking. But no surprise," she wrote, ‘So many to hold responsible. You know who you are. You dismissed the violent, divisive, cruel rhetoric. You made excuses. Cowards He/you are not leaders. We will try to re-build. You will try to live with yourselves." 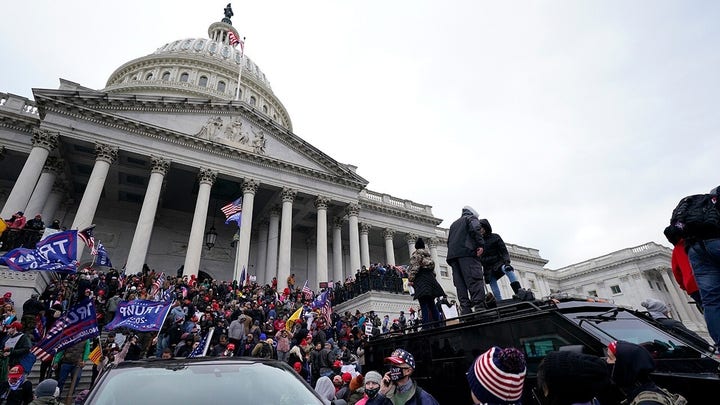 An emphatic Karlie Kloss didn't mince words when she expressed her disappointment with the display at the Capitol on Wednesday.

"Accepting the results of a legitimate democratic election is patriotic. Refusing to do so and inciting violence is anti-American," the "Project Runway" judge tweeted.

Aside from those in Hollywood, many lawmakers have also condemned the acts of protestors at the Capitol on Wednesday.