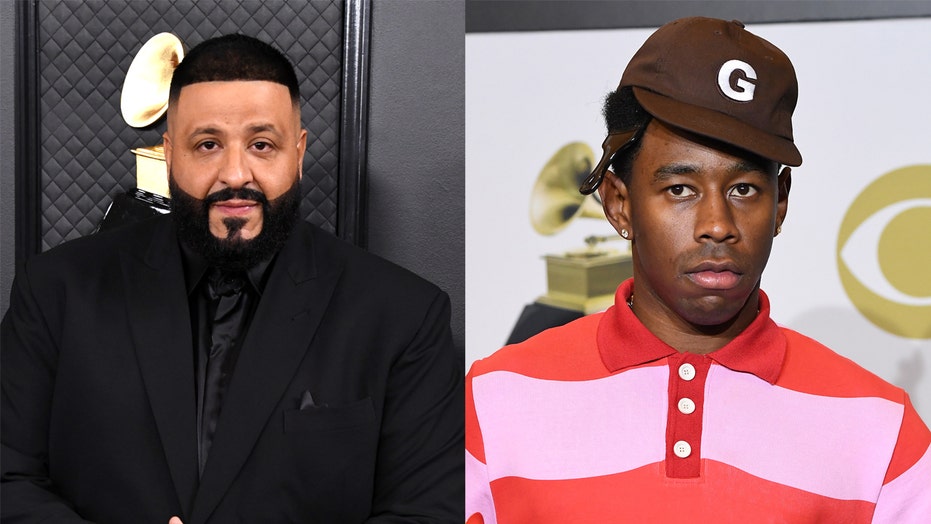 LOS ANGELES – Tyler, the Creator and DJ Khaled issued their sincerest of respects to NBA legend Kobe Bryant, his daughter Gianna, as well as slain rapper Nipsey Hussle, backstage at the 2020 Grammys following the artists' respective wins on Sunday.

“Man, that news was heavy, especially just being in L.A. and just being at the Staples Center and within a short period of time between him and Nipsey [Hussle],” rapper Tyler, the Creator, 28, somberly told Fox News backstage in the press room after winning best rap album.

He continued: “And if you're from Los Angeles and depending on what sector you're in, like, that sh-- is really, really heavy.

“So we took an L tonight and rest in peace to Kobe, that hurt. But also we took a win just being from Los Angeles, and taking that home, so it's mixed emotions – but yeah, pretty much," the artist concluded.

After taking home his first-ever Grammy win for “Higher,” which featured the late Hussle and EGOT holder John Legend, DJ Khaled, 44, took his time in explaining the culmination of the record, adding that Hussle carried the song through his inspiration as a stout business and family man.

“Well, you know, the song 'Higher,' we represented our brothers and it was beautiful,” said Khaled. “But at the same time, it's tough, you know. And I wanna say, I'm honored that the family gave us the blessing to perform this song. You know what I'm saying?”

“The song is very special. When me and Nipsey was in the studio, we talked about this," the “We the Best” head honcho added. “Everything in the first verse, we talked about in the backyard – we was talking about our families, our kids, entrepreneurship, being a great leader, being a great family man. And he ended up putting all that in the first verse.”

Khaled maintained that upon finishing “Higher,” he and Hussle, who was 33 at the time of his death, discussed the record and prayed that it would result in a Grammy nod.

“And I remember when he got done cutting his verse, I was telling him when we both was chilling, we was both feeling great about the song – and I was saying, God willing we get nominated for a Grammy,” Khaled said. “And now we won the Grammy. Nipsey Hussle, John Legend, Khaled and the family – we won this.

Before exiting, Khaled made a point to mention Hussle’s independent record label and his surviving family.

“Shout out All Money In and the family for letting us do this and put the record out and just letting us represent our brother.”