Judge steps aside in the Jussie Smollett case

Judge LeRoy K. Martin Jr. will leave the decision on whether to assign a special prosecutor to investigate Kim Foxx's handling of 'Empire' star Jussie Smollett's case to the presiding judge instead; Matt Finn reports from Chicago.

The judge in the Jussie Smollett hate crime hoax case recused himself from the matter on Friday, but it has yet to be decided if there will be a special counsel investigation in a case that has been “very messy,” former federal prosecutor Doug Burns said on “America’s Newsroom” Friday.

Judge Leroy Martin Jr. recused himself after retired appellate Judge Sheila O'Brien filed a petition requesting him to do so, and assign a judge outside of Cook County, Illinois who would be able to impartially assign a special prosecutor to investigate Smollett and his attorney Kim Foxx. 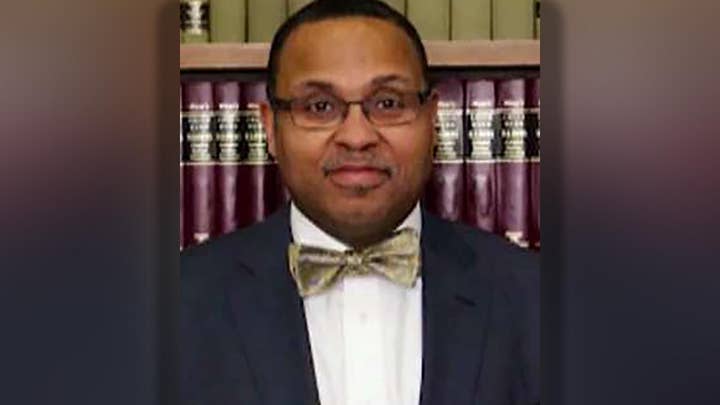 “The reason is the judge’s son works for the DA’s office. ‘You know your honor in light of the fact that your son’s an assistant prosecutor we’d like you to step aside,’” he explained, of Martin’s son who is an assistant state's attorney in Foxx’s office. “Now, that doesn’t automatically mean that he should step aside just because his son works there, but at the same time, it can give the appearance of impropriety obviously and a conflict could develop, a supervisor could ask him to do something on the case, not realizing he’s the judge’s son.”

“I am not unmindful that the appearance of justice is important,” Martin said on Friday. “I think it is prudent and wise that I transfer the matter,” instead, appointing Judge Michael Toomin to handle the case.

The Smollett case was dropped and records were sealed in March, but Foxx filed a motion in earlier May to have a judge unseal the documents so that an independent inspector general can review them, a more favorable alternative to having a special counsel inquiry.

“The judge has to decide whether to appoint an independent counsel… to look at the circumstances as to why the case was dropped,” Burns said.

“She’d rather put her eggs in the basket of let's have the inspector general look at it as opposed to an independent counsel. People are fearful of independent counsels,” he continued. “She would rather simply have the IG look at it. And by the way, that’s why she’s not opposing unsealing the records.”

O'Brien's petition also highlighted “the perception that justice was not served here, that Mr. Smollett received special treatment,” because Foxx and her law office remained involved in the case even after she said she recused herself because she was in touch with her client’s family.

“The general public feels that this case was badly, badly mishandled,” Burns said.