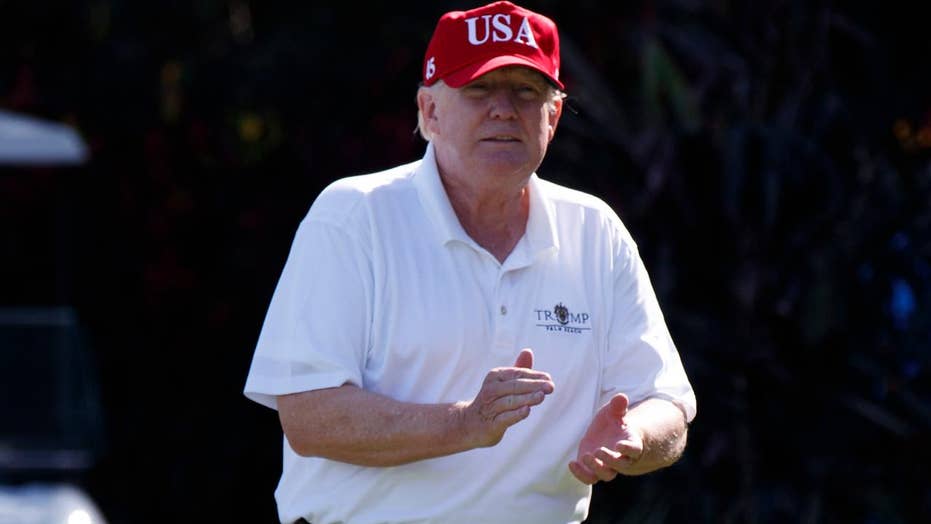 CNN melts down over white truck that blocked view of Trump

As 2017 wraps up, media watchdogs and political pundits are mocking CNN for its obsession this week with a white truck that blocked the network from filming President Trump playing golf Wednesday in West Palm Beach, Fla.

CNN producer Noah Gray started the fixation Wednesday when he tweeted a photo of the truck with the caption: “Yesterday & 2 other times during POTUS' Winter vacation, CNN cameras captured Trump golfing, from public sidewalk. Today, not possible.” Gray brushed back critics who thought the network was picking on Trump by posting video of CNN’s “stakeout footage” of former President Barack Obama playing golf when he was in office.

CNN’s Kevin Liptak eventually reported the Secret Service did not provide the truck and the Palm Beach County Sheriff’s Department told the liberal network their department did not order the box truck to obstruct the network’s view of Trump golfing.

Despite both the Secret Service and the local police denying that the truck was planted specifically to block CNN from filming Trump hitting the links, the network continued to obsess over the vehicle. At one point, a chryron on the network read: “Truck attempts to block CNN view of Trump golfing” -- despite no actual evidence that this was in fact the reason why the truck was parked in that location.

"Will CNN interview Trump's caddy next? Or will it resort to doing analysis of the president's backswing or using a satellite to track his actual score?”

“This may seem trivial, but it is important to get video of the president as he does these things on a daily basis…the president and the White House have tried to obscure the fact that President Trump golfs on a regular basis,” CNN’s Dan Merica told Don Lemon on Wednesday.

By Thursday, CNN was still trying to get to the bottom of why a truck would be parked on a road and sent Gray to the Sheriff’s office parking lot, where a similar truck was spotted. CNN was not able to figure out if it was the same truck because the license plate was apparently blocked.

Mike Magnoli, a local reporter from CBS’s Palm Beach affiliate, finally cracked the case on Friday afternoon and confirmed that the truck parked in the Sheriff’s lot was the same truck blocking CNN’s view of Trump playing golf. Magnoli admitted that he looked into it because he was “intrigued” by CNN’s coverage. But the Sheriff’s Department maintains that they never authorized the truck to assist Trump from being filmed.

Magnoli’s scoop allowed CNN to discuss the truck for a third-straight day.

Media Research Center Vice President Dan Gainor told Fox News that CNN has done “more than any outlet in 2017 to turn news into a game of Trivial Pursuit” and thinks the fascination with the truck is a prime example.

“CNN can't be bothered to find conservatives to work on air at its network, but it wants viewers to believe it broke a key story by getting golf shots of the president,” Gainor said. “I eagerly await Don Lemon going live again about Driver Gate. Will CNN interview Trump's caddy next? Or will it resort to doing analysis of the president's backswing or using a satellite to track his actual score?”

Earlier in the week, CNN touted “exclusive video” of Trump on the golf course and regularly referred to the truck as “mysterious.” Despite confirmation that the truck has been located, the motive for why it was parked in front of CNN’s camera hasn’t been revealed.

“The USSS is in the business of protection and investigations not in commissioning vehicles to block the media's view of the President's golf swing," the Secret Service said in a statement.

The entire situation has become a point of ridicule on social media, with one user writing, “Someone should park a big white truck in front of Iran,” referring to the lack of CNN’s coverage about the ongoing protests in Iran.

Daily Caller media guru Amber Athey wrote, “All it took to ruin @CNN's day was one white truck! Watch them complain that they can't film @realDonaldTrump golfing through the bushes,” with a link to footage of CNN anchors expressing frustration with the truck.

Fox News contributor Stephen Miller joked, “We’ll get around to mass protests in Iran just as soon as we write our 47th story about this big white truck.”

The Drudge Report ran a headline, “Breaking News: CNN’s quest for the truth behind truck blocking view of golf stretches into second day,” while reporter Benny Johnson joked that it is simply a case of “white truck privilege.”