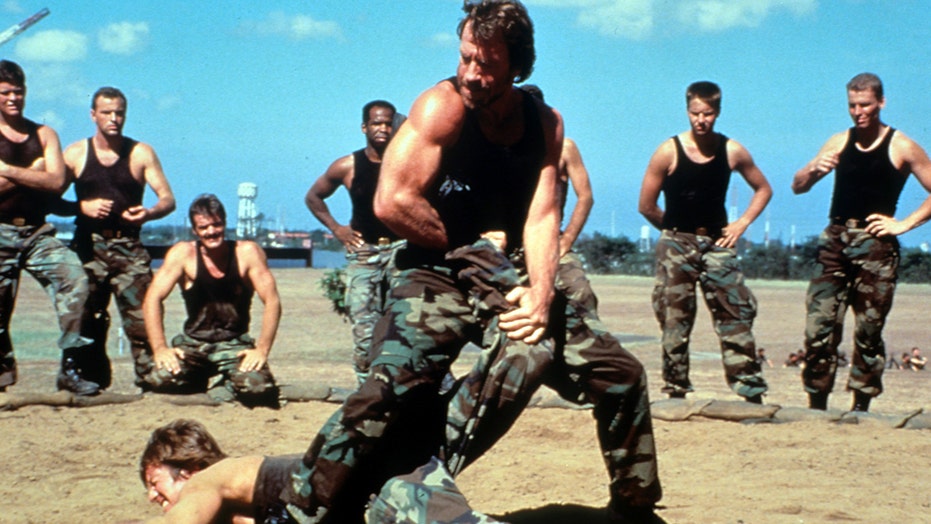 Chuck Norris was known as one of Hollywood’s tough guys who could knock you out in real life. Here are some of his most iconic characters from TV and film.

On March 10, action star Chuck Norris becomes another year older, wiser and, if a slew of Internet memes are to be believed — tougher.

One of the action genre’s most prolific heroes turns 80 in 2020 and he’s got an incredibly long and storied career of kicking the snot out of bad guys to show for it. Norris is able to play tough and capable characters because he himself is an accomplished, title-holding martial artist and veteran of the United States Air Force.

While there are many leading Hollywood tough guys, Norris is one of the rare few who can walk the walk as well as talk the talk.

The catalog of the best tough-guy moments Norris has had since getting his start in the 1970s is a bafflingly long document. Still, in an effort to celebrate the action star’s 80th birthday, below are just some of his best:

Getting his start in a fight with Bruce Lee

Norris got his start teaching martial arts in Los Angeles. That’s how he met Bruce Lee, who eventually put him in his 1972 movie, “The Way of the Dragon.” Norris plays Colt, a world-class martial arts expert brought in by the bad guys to stop Lee’s character after he made fools of all the local mobsters.

The iconic martial arts duo squared off in a fight scene that the A.V. Club called a “masterpiece” in a 2016 article.

Although Colt loses the fight, it remains one of Norris’ best tough-guy moments for the way he loses. After initially beating Lee’s character, Colt is finally worn down and has his arm and leg broken by his opponent. Unable to accept defeat, he continues to attack, forcing Lee’s character to reluctantly kill him.

Beating up a whole gang in ‘Code of Silence’

Chuck Norris fighting against a group of men in the film 'Code of Silence.' (Mondadori via Getty Images)

After Bruce Lee gave him his start, Norris worked for years in a series of B-movies as a bonafide action star and karate expert. It wouldn’t be until 1985 that a breakout role in the movie “Code of Silence” showed the world that he had real movie star potential.

In his glowing review at the time, Roger Ebert noted that the action movie about dirty cops and gangs, “may be the movie that moves Norris out of the ranks of dependable action heroes and makes him a major star.”

The toughest moment for Norris’ character in the movie, Cusack, comes after he refuses to lie for a dirty cop, earning him the disdain of his fellow officers. Norris rushes headlong into a gang’s hangout not realizing his calls for backup will fall on deaf ears.

When he finds himself surrounded, outgunned and outmanned, he does what any sensible tough guy would do — attack a room full of murderous gangsters.

Although he ultimately loses the fight, he takes on about 20 men and definitely clobbers close to half.

Norris went from a mean, street-level hero in “Code of Silence” to an elite U.S. military operative in the 1986 movie “Delta Force.” After his character, Col. Scott McCoy, saved a group of hostages by doing some stunning motorcycle heroics, he went on to star in a sequel, “Delta Force 2: The Colombian Connection” in 1990.

It was easy for Norris to find action-heavy, tough guy moments in the film since he was unusually close to the director. According to the L.A. Times’ review at the time, Aaron Norris, Chuck’s younger brother, helmed the project.

BIBI NETANYAHU ON MEETING WITH CHUCK NORRIS: 'ISRAEL IS STRONG BUT IT'S INDESTRUCTIBLE NOW'

Perhaps McCoy’s best moment in the two movie franchise comes somewhat early in the sequel when he and the Delta Force are tasked with extracting a drug kingpin from a plane during a brief window that it’s over U.S. airspace. The kingpin pleads for McCoy to let him go, and Norris’ character is happy to oblige.

He tosses the criminal out of the airplane with no parachute. He then defies physics and manages to catch him in mid-air and parachute them both to safety. The heroic stunt is unnecessary and was simply a way for McCoy to watch the villain sweat for a moment.

Chuck Norris starred in 'Walker, Texas Ranger' for more than a decade. (CBS via Getty Images)

It’s impossible to discuss the career and life of Chuck Norris without mentioning his most iconic role to date, “Walker, Texas Ranger.” The series ran for eight full seasons, a single three-episode “pilot season” and spawned a 2005 made-for-TV movie. Norris’ gruff but loyal character engaged in countless tough, impressive and downright crazy moments throughout the show’s run.

While there were many, many instances of Walker being tough-as-nails, a moment from the pilot episode demonstrates the character very well. When he has to confront three bad guys, Walker not only makes short work of them but spends a little extra time on a man whose nose he broke.

After painfully resetting the break, Cordell Walker declares that it “looks better the other way” before busting his nose a second time in under a minute. With that kind of hilarious justice, it’s no wonder that the CW is looking to reboot the series.

Every moment he was on-screen in ‘Expendables 2’

Chuck Norris told one of his own jokes during a cameo in 'Expendables 2.' (Lionsgate)

Sylvester Stallone gathered Hollywood’s best action heroes into one franchise with three installments beginning in 2010. It’s not at all surprising that Norris found his way to the franchise for the sequel two years later. By this point, not only was Chuck Norris a successful actor, but he’d become an Internet legend with countless jokes about how tough he is. One of them even made its way into the film, delivered by the actor in the most no-nonsense tone imaginable.

"I heard you got bitten by a king cobra," says Stallone (via GQ).

"Yeah," replies Norris. "But after several days of excruciating pain, the cobra died."

When the Expendables team finds themselves out of ammo and pinned down by countless bad guys and a tank, Norris’ Booker (A.K.A. The Lone Wolf) surprises them all and somehow eliminates every threat on the field, saving the heroes. Unfortunately, he doesn’t join the team, opting instead to work alone. Still, that doesn’t stop him from showing up during the film’s thrilling climax to save the day once again.

After such a long and storied career in action movies and TV, his appearance in the franchise cements him as one of the best in the business.