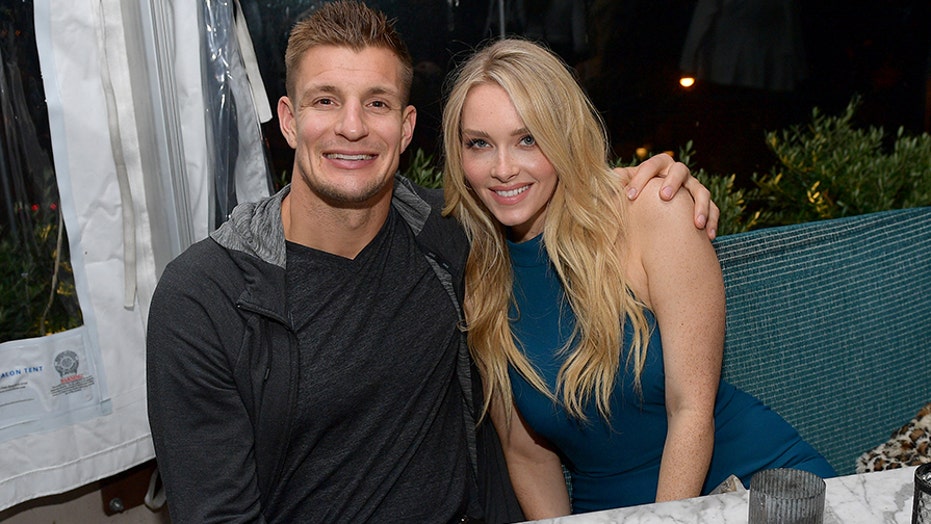 Camille Kostek and Rob Gronkowski are turning quarantine into a dance party to help uplift their spirits.

The Sports Illustrated Swimsuit cover girl told Fox News she and her longtime beau have been keeping busy learning new dance moves indoors and sharing their routines on social media.

“We’re always living that ‘never not dancing’ life,'” said the model. “We just turn up the music wherever we are-- whether it’s the kitchen or backyard -- and just dance it out. The new joke is that he’ll come up to me and say, ‘Hey, I want to learn that neat dance move you did today.’ It’s our way of moving and working out. But it’s almost like a brain game because choreography and rhythm are challenging. But he loves it. And this is all just super fun for me.”

Kostek previously shared she was introduced to Gronkowski after she quit the Patriots cheerleading squad in March 2015. For months, the pair denied having a romantic relationship, though they started posting loving photos of each other on Instagram.

By fall 2015, the pair were celebrating birthdays together, attending red carpet events arm in arm and publicly supporting each other’s endeavors. Kostek was frequently spotted in the stands among New England fans — even sporting Gronkowski’s jersey — in 2016, according to E! News.

In February 2017, a TMZ report claimed the duo had split and Gronkowski had “moved on.” But Kostek contradicted the news by posting photos of herself sporting his jersey. They also attended a wedding together three months later, according to E! News.

The 28-year-old admitted that there are times when it can be difficult to get out of bed during the ongoing coronavirus pandemic. However, she credited the NFL star, 30, for helping her stay motivated each day, especially when they all seem to feel the same.

“We’ve actually learned a lot about each other,” she continued. “I’m having so much fun in terms of learning new workouts from him. It’s really easy to want to just sleep all day. But he helps me get up and take on the day. I’m motivated by him to keep moving. I’m constantly watching my health app to make sure I’m taking enough steps. He’s just so much fun to be around and he truly helps me to get up and seize the day. We haven’t even knocked out many movies yet. We haven’t even ventured into binge-watching. We’re just really busy doing things together. Moving has been key.”

However, Kostek did share she enjoys her times of solitude to ease her mind during the COVID-19 crisis. The star noted it’s essential to keep a comforting routine while practicing social distancing.

“It’s one of those times that really put me to the test,” she admitted. “I used to do a lot of journaling on the regular whenever I went flying or I was sitting in a trailer for a few hours [during work]. I took the time to really write things down. I had my to-do list, the things that needed to get done each day. But I also gave back to myself and really wrote down everything that’s been on my mind. That’s really been helping a lot. It’s important to just be still.”

Kostek revealed that while social media has been essential in keeping her connected with loved ones, as well as her followers, it’s just as important to disconnect.

“It wasn’t until now that I could really take walks in the woods and just sit with myself in a room with no social media,” she explained. “I’ve always wanted to practice meditation, but I’ve never had the time. Being still may sound a little crazy to some, but I really encourage people to simply listen to your own breath and unclog all those thoughts running through your mind. It’s important to take a step back. Even if you’re meditating, practicing yoga, reading a book, or taking a bath - It’s so important for our wellbeing to just take some time away from social media.

“I’ve walked in nature more than I ever have,” she shared. “And when I say nature, I don’t mean hike trails. I just mean through the woods in my backyard. It’s a simple thing that doesn’t cost any money and you can do by yourself. I’ve been doing that a lot and it’s almost a bright side to this whole situation.”

Kostek said she hopes her routine will inspire others to focus on self-care, especially while in isolation.

“Just take three deep breaths,” she said. “Write down your fears. Write down your thoughts. Write down the feelings you want to have. Just release it, don’t ignore it. It’s a lot easier said than done, but once you start practicing some of those things, you’ll realize that you have a lot more control over your thoughts, your feelings.”

Back in 2018, Kostek told Fox News that contrary to popular belief, she didn’t meet her beau on the football field. In fact, the star revealed it was essentially forbidden to have romantic relationships with the players.

“It’s completely frowned upon,” Kostek said at the time. “When you make the team, you’re completely two separate entities. Although you’re a Patriots cheerleader, you are not one team. As cheerleaders, we would be removed, cut from the team. It’s not allowed.”

Kostek was linked to the athlete since she left the squad in 2015 to pursue modeling.

“I am such a private person,” she explained. “It was hard at first when people would send articles with my name on it. It’s an overwhelming feeling to read something that you have no control over.

"But like most things, you get strong when you have to deal with situations like that. It’s gotten a little easier. And usually, the people that are close to you know the truth. So it’s one of those things where you just have to let people think what they wanted to think.”